The Alexander Hamilton Institute for the Study of Western Civilization (AHI) is pleased to announce the award of the inaugural James Piereson Summer Internship to Casimir Zablotski of Buffalo, New York.  Mr. Zablotski is a rising junior at Hamilton College.  He is one of the leaders of AHI’s Undergraduate Fellows Program and has served as associate editor of Enquiry, an AHI-sponsored newsletter devoted to the promotion of “free thought and discourse.”  His investigative report on Bernie “Sanders at Hamilton [College],” which appeared in the May 18, 2020 issue, attracted national media attention. 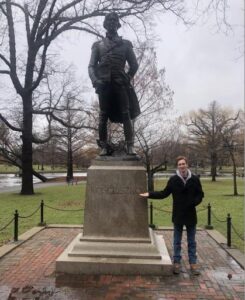 Mr. Zablotski’s describes his academic interests as wide-ranging with a particular fondness for history, political science, economics, and sociology.  “My love of history,” he explained, “developed from an infectious curiosity about the sinking of the RMS Titanic.  A National Geographic documentary that I happened to rent from my local library when I was five years old captivated me, and I studied the disaster extensively during my youth.  A fascination with Edwardian England developed into a love for modern Western history, and as I matured, I also became focused on the founding of our country and the philosophical ideals that continue to animate our political discussions.”

Mr. Zablotski attended a Jesuit high school. “There I first learned of the importance of individualistic principles, such as cura personalis, which translates from Latin as “care for the whole person. Broadly understood, this idea implies that because each person is unique, he or she must devote care and attention to all their God-given attributes and abilities in pursuing the good life.”

With the award, Zablotski will participate in the intellectual life of AHI.  He will perform research for AHI fellows and read and discuss select texts that advance his intellectual interests.

“Mr. Zablotski is a most deserving recipient of AHI’s inaugural James Piereson Summer Internship,” said AHI President Robert Paquette.  “As a freshman, he attended the last class that I taught at Hamilton College.  He rose to the demands that I placed on him. He was shaken by the grade on his first paper.  He didn’t whine or declare victimhood but approached me in my office for my best wisdom as to how to improve. We had several intensive sessions.  He took the criticism well (no small matter these days).  His second and third papers showed impressive improvement.  His final exam ranked as one of the best in the class, largely composed of juniors and seniors.” 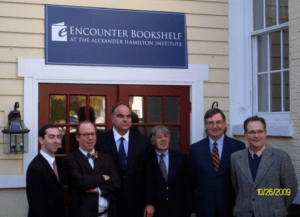 James Piereson (second from the right) at the opening of The Encounter Bookshelf at the AHI headquarters in Clinton, N.Y.

With the inaugural award, AHI honors James Piereson, Senior Fellow, Manhattan Institute and trustee of the William E. Simon Foundation.  Dr. Piereson serves on numerous boards including The Pinkerton Foundation, the Thomas W. Smith Foundation, The Center for Individual Rights, the Foundation for Cultural Review, the American Spectator Foundation, Donors Trust, the William F. Buckley, Jr., Program at Yale University, and the Intercollegiate Studies Institute. He has published dozens of articles in leading journals and newspapers and is the author of Camelot and the Cultural Revolution: How the Assassination of John F. Kennedy Shattered American Liberalism (2007); The Inequality Hoax (2014); Why Redistribution Fails (2015) and Shattered Consensus: The Rise and Decline of America’s Postwar Political Order (2015). He received his Ph.D. in political science from Michigan State University in 1973.

“On Constitution Day, 2020, AHI will be celebrating its thirteenth year of existence,” observed Paquette.  “James Piereson recognized the importance of what AHI was trying to accomplish and helped us early on and every step of the way.  He has spoken at AHI events; he has visited our headquarters; he has advocated our cause and applauded our mission.  Dr. Piereson is a rare combination of talents, for he is not only a first-rate scholar but a gifted leader in the fields of philanthropy and educational reform.  His labors over a long career have benefited scholars and organizations so numerous their listing would take up pages.  Jim has admirers on AHI’s board of directors.  Both he and they know all too well that the fate of posterity hinges on a fair and honest reckoning with the past, that only by looking backward with our clearest vision can we move more surely forward to human betterment. What better way to honor Jim and his vision than to create in his name a summer internship that will offer intellectual nourishment to an outstanding young person.  It is AHI’s hope that as we grow this inaugural award that we will be able to offer more than one of them and make them portable to the benefit not only of AHI but of kindred-spirit organizations.”