Douglas Ambrose, Charter Fellow of the Alexander Hamilton Institute of the Study of Western Civilization (AHI) and Carolyn C. and David M. Ellis ’38 Distinguished Teaching Professor of History at Hamilton College, is a long-distance runner. Judging by his energetic performance as keynote speaker at the Tenth Annual David Aldrich Nelson Lecture in Constitutional Jurisprudence, on Constitution Day, Sunday, September 17, such training has served him well.  On the Tenth Anniversary of the AHI, Professor Ambrose delivered a potent lecture, “Revisiting the Idea of a Godless Constitution.” 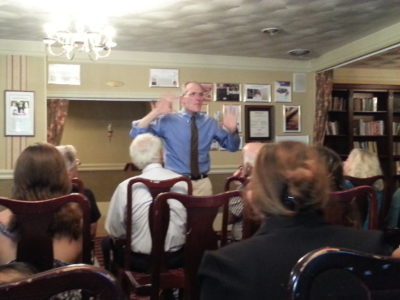 After AHI Executive Director Robert Paquette opened the event and introduced principals of the organization, Ambrose enthralled a crowd of  more than fifty students and community members, displaying the energy, insight, and enthusiasm that has won him multiple teaching prizes, including the Class of 1963 Excellence in Teaching Award and the Student Assembly’s Wertimer Award for Excellence in Teaching, the latter determined by student vote.  Ambrose, a scholar of American religious history, prefaced his discussion with warnings about historical malpractice, about such problems as undue present-mindedness in reading the past, especially in the matter of whether the United States is a Christian or secular nation. The topic is “juicy and incredibly vague,” he explained, “and lends itself to a misuse of history”  Progressives tend to embrace a narrative of transition from “darkness to light,” backtracking from the allegedly “enlightened” present to extract selectively from history only information that affirms “the progress” to where we currently are or supposed to be headed. There is a tendency to go back in time and find one or two individuals who “confirm what we think today” and thus to plunder history for partisan ends. In reality, though, Ambrose maintained, history is “messy,” with “lots of continuity,” especially in the area of religion.

The idea of the United States as a secular nation emerged, Ambrose argued, from a “Whig interpretation” of history, one that privileges selectivity for present partisan political purposes over the “lived history.” The problem is fed by an over-reliance on certain documents and certain statesmen who spoke words that partisans want to hear or can infuse with new meaning to create a usable past.  Ambrose indicated that the very term “the founders” can prove misleading because it implies that a small group of powerful men manufactured the United States out of whole cloth. Such an interpretation ignores the considerable continuity that informed the Union, especially if one inspects the first state constitutions.  James Madison, Ambrose noted, considered to be the “father” of the Constitution lost half of what he wanted to put into it, including the effort to “privatize faith.”  Thomas Jefferson, Ambrose contended, was an “outlier” in the process of federal constitution making.  Nor did Virginia’s first state constitution serve as a model for other states. 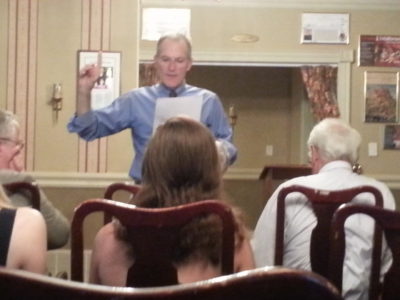 While “the U.S. Constitution is Godless” (being silent on God), said Ambrose, the state constitutions were not. At the state level, a “separation of church and state” did not exist initially. The First Amendment prohibited the establishment of a national church, but not a “Massachusetts church or a Georgia church,” from, of course, various Protestant denominations.  Indeed, Massachusetts had an established church until 1833.  From the “Protestant nonsectarian consensus,” “corporate rights” such as holding the Sabbath and prohibiting certain activities like working and gambling, emerged. These prevailed over the individual rights of someone who sought to engage in such activities. Blasphemy, for example, was a punishable offense. Twelve of the thirteen states (excepting Virginia) had religious tests for holding office and prevented atheists from voting. Deuteronomy was the most quoted text in state constitutions. There was government funding of missionaries to Native Americans and grants of land to churches; state universities mandated such things as chapel attendance.

Toward the end of his lecture, Ambrose discussed a revealing case, the response from the New York State legislature in 1838 to petitioners who sought to overturn laws that enforced the observance of the Sabbath. “The Report of the Committee on the Judiciary” articulated the precepts that undergirded its and other state constitutions, namely, “Our Government depends for its very being on the virtue of the people; on that virtue which has its foundation in the morality of the Christian religion; and that religion is the common and prevailing faith of the people.” Therefore, churches and religious associations were no more the “public nuisances” the petitioners claimed than were literary societies or political meetings.  Our current misunderstanding of imagining a “high wall of separation” between church and state derives in part from a now trumpeted response in 1802 by Thomas Jefferson to a letter from the Baptists of Danbury, Connecticut. They were “not a big power base,” but a small persecuted group. Its members, Ambrose emphasized, never even responded to Jefferson’s response to their original letter.  Jefferson’s letter had no legal force, and in it Jefferson acknowledged his impotence on the matter as an adherent of state sovereignty and strict interpreter of the Constitution.

On the matter of religion and the common law, Ambrose pointed to Supreme Court Justice Joseph Story, author of the three-volume Commentaries on the Constitution of the United States (1833), the most scholarly study of the Constitution written during the antebellum period (a work, by the way, that formed the basis of an AHI reading cluster). Story, contra Jefferson, believed that it was the duty of government to encourage Christianity. The Fourteenth Amendment, however, eventually wrought a revolution in this country’s understanding of the First Amendment and the entire Bill of Rights. Today, we think in terms of individual rights rather than corporate rights, focusing on, say, the one student’s right not to be exposed to a Christian prayer in class over the corporate right of a majority of students to pray in the presence of that student.

This semester Professor Ambrose is leading a reading cluster on the topics of church and state, religion and government, using America’s God: From Jonathan Edwards to Abraham Lincoln (2005) by Mark Noll, one of the foremost historian of religion of his generation.  This reading cluster, in effect, announces for the AHI a new initiative:  the Alexander Hamilton History Initiative. It is designed, as Paquette pointed out, to acquaint students with the discipline of history, its practices, standards, and methods, to counter the abuse of history that is so prevalent in the polemics that pass for history on college campuses.  Participants in the initiative will examine great books in history and assess the strength and weaknesses of various methods used to undertake historical reconstructions.

As the AHI celebrated its tenth anniversary, it is ramping up programmatic offerings, offering this semester multiple reading clusters and guest lectures at AHI headquarters, Hamilton College, and Colgate University. One cluster, led by AHI Fellow Dr. Christopher Hill, a prize-winning former Hamilton College instructor, will read, cover-to-cover The Road to Serfdom by F.A. Hayek.  Hill called Hayek the “answer to Marx,” as well as to John Maynard Keynes, Hayek’s contemporary of the mid-twentieth century.  AHI’s continuing education classes, taught by resident fellow Dr. David Frisk, continue to break attendance records. This semester’s course on Abraham Lincoln is straining the capacity of AHI headquarters. Additionally, Frisk is for the first time teaching a government course on the Hamilton College campus, “Modern Conservative Politics.” 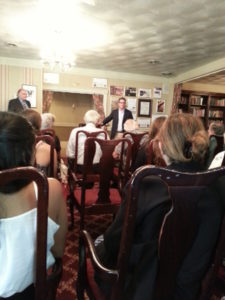 On September 28, AHI Senior Fellow Mary Nichols, Professor of Political Science at Baylor University, will lecture on the Colgate University campus on “Leaders and Leadership in Thucydides’ History,” a lecture designed to complement Dr. Elizabeth L’Arrivee’s Thucydides reading group, sponsored at Colgate by the AHI.  In October, Professor Paul Gottfried, Raffensperger Professor of Humanities Emeritus at Elizabethtown College, an expert on conservatism and European intellectual history, the man often credited with coining the term “alt-right,” will deliver lectures on October 25 in two Hamilton College classes, in Frisk’s “Modern Conservative Politics” class and Dr. Alfred Kelly’s seminar “Nazi Germany.” The following day the AHI will be hosting a reception for Dr. Gottfried and a Leadership Dinner for AHI undergraduate fellows during which they will discuss the meaning of fascism from a prescribed chapter from Gottfried’s monograph.  For Veterans Day, Colonel David Maxwell, Associate Director of the Center for Security Studies and the Security Studies Program at Georgetown University, will give the Fifth Annual General Josiah Bunting III Veterans Day Lecture. It will focus on North Korea and be held at Hamilton College. (All events are listed on the AHI calendar at www.theahi.org.) 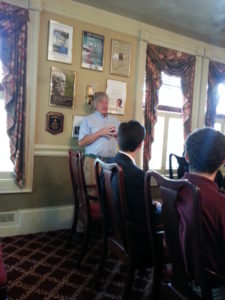 The AHI student newsletter, Enquiry, continues to thrive and provides an expansive forum for AHI undergraduates to think and speak freely on controversial issues. Sam Benevelli, the new editor-in-chief, was introduced at the event and expressed her excitement over her role, encouraging students in the audience to get involved. Additionally, Douglas Ambrose’s edited volume of Eugene Genovese’s last book, The Sweetness of Life: Southern Planters at Home, by Cambridge University Press, is scheduled for release on October 5, 2017. AHI’s efforts in establishing a repository for Genovese’s books and papers, which were bequeathed by Genovese, one of this country’s most influential historians, continue apace. The AHI plans to announce the completion of a catalogue of these items, to be posted on the website, in October.

At the beginning of the Tenth Anniversary celebration, AHI principals recalled the origins of the AHI.  Professor Paquette spoke of the seed of the organization being planted in a lunch conversation he had with Carl B. Menges more than fifteen years ago, when Mr. Menges was a member of Hamilton College’s board of trustees.  Economics professor emeritus and AHI charter fellow James Bradfield spoke about the germination of the seed in a demanding interdisciplinary seminar, “The Idea and Institution of Property,” co-taught with Paquette at Hamilton College. The course ran for five years and covered issues that ranged from the debates between Aristotle and Plato about which form of property undergirds the best regime to the controversial Supreme Court case Kelo v. New London (2005).  Bradfield traveled with his wife Alice from their home in Inlet, in the Adirondacks, for the celebration.

In reflecting on the past ten years, Paquette underscored the collective effort that went into the making of the independent organization once Hamilton College decided it wanted to get out from under the original agreement that would have established an Alexander Hamilton Center on campus.  “Much blood and sweat,” he observed “has been poured into an organization that now has national recognition and sponsors events coast to coast.  We have much to be thankful for.”  To judge by the turnout and enthusiastic response to Professor Ambrose’s lecture, the AHI will have more than one decennial celebration.