The Alexander Hamilton Institute for the Study of Western Civilization (AHI) is pleased to announce its sponsorship of a new student reading group at Loyola University Maryland under the auspices of Professor Diana Schaub.  Dr. Schaub will lead a gifted group of undergraduates in an intensive reading of the Baron de Montesquieu’s Spirit of the Laws (1748), one of the most influential books of the eighteenth century and, indeed, perhaps the most influential work on the political thought of the founders of the United States and of the framers of the United States Constitution. 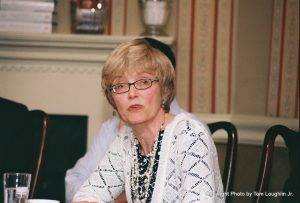 The Montesquieu reading cluster received its impetus from James McNamee, one of Schaub’s students, who asked her for a list of recommended readings so that he could pursue his interest in political philosophy while he was spending a semester abroad.

He took with him Machiavelli’s Discourses (1531) and The Prince (1532) and decided to undertake Montesquieu’s challenging masterpiece, The Spirit of the Laws, once he returned to campus in the fall 2016.  Two other students, Christian Henniger and Kjerstin Burdiek, joined, and by mid-semester the group was gathering momentum and would meet every two weeks or so with the goal of intensively reading all 631 chapters of the book.

Schaub explained that Montesquieu is not always, or even often, included in the standard survey course on modern political thought: “One reason for that neglect is that The Spirit of the Laws is such a massive book and also such a difficult book. It’s not all that hard for students to get a pretty decent grasp of the political teaching of Thomas Hobbes or John Locke in a few weeks. That is not true of Montesquieu. As a result, if Montesquieu is taught, it is usually his chapter on the constitution of England and the doctrine of the separation of powers.”  That section is important, Schaub stressed: “Our founding fathers were avid readers of Montesquieu and one of the things they learned from him was how to distribute power among the branches of government.” 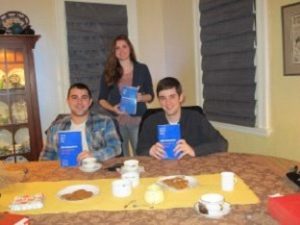 Schaub expressed her gratitude to the AHI for the “luxury” of being able to devote an entire year to reading the whole of The Spirit of the Laws. The support of AHI will allow the group of dedicated students the opportunity to dig deeply into the text in a small setting, and “to pull back and ask some big questions about Montesquieu’s relation to other modern philosophers.”

This is the latest of Professor Schaub’s many activities with the AHI. In 2013, she was one of four guest speakers at Leadership Dinners for the AHI-sponsored Montesquieu reading group led by Executive Director Robert Paquette. That group, drawn from Hamilton College’s student body, read Montesquieu’s Spirit of the Laws cover-to-cover. That same year, along with Professor Paul Seaton, Schaub served as discussion leader at AHI’s Fifth Annual Summer Conference. The conference theme, “What So Proudly We Hail: The American Soul in Story, Speech, and Song,” took its title from her coedited volume What So Proudly We Hail (2011).  In 2016, Dr. Schaub directed and keynoted at Skidmore College the Annual Undergraduate Conference on the American Polity, co-sponsored by the AHI.

AHI Executive Director Robert Paquette expressed his appreciation for Schaub’s involvement with the AHI. “Diana Schaub and her partner Lauren Weiner, associate editor of the Law and Liberty website sponsored by Liberty Fund, are dear friends of the AHI. Diana has impressive scholarly credentials and has received numerous accolades for her work. She has added substantially to the intellectual life of the AHI with her several appearances, most recently with a penetrating analysis of Frederick Douglass’s thought at the undergraduate conference at Skidmore College.  The AHI is delighted to help her with the Montesquieu reading cluster and look forward to working with her and Lauren on other projects of mutual interest.”

This new reading group marks the latest of  AHI affiliated programming with kindred-spirit organizations and affiliates across the country, operating, for example, at the Rochester Institute of Technology,  Trinity College, Skidmore College, Dartmouth College, Colgate University, and Baylor University.