AHI Featured in New Report by the Pope Center

Previous Next
AHI Featured in New Report by the Pope Center 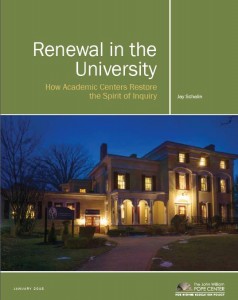 The Alexander Hamilton Institute for the Study of Western Civilization (AHI) was pleased to be featured in a new report entitled “Renewal in the University: How Academic Centers Help Restore the Spirt of Inquiry,” by Jay Schalin of the John William Pope Center for Higher Education Policy.

The report focuses on the growing void in higher education and how new academic centers that preserve and promote the knowledge and perspectives that are disappearing from higher education, have cropped up to fill that void.

The John William Pope Center for Higher Education Policy is a nonprofit institute dedicated to improving higher education in North Carolina and the nation. Located in Raleigh, North Carolina, it has been an independent 501(c)(3) organization since 2003. It is named for the late John William Pope, who served on the UNC-Chapel Hill Board of Trustees.