The Alexander Hamilton Institute for the Study of Western Civilization (AHI) will hold the Twelfth Annual David Aldrich Nelson Lecture in Constitutional Jurisprudence on Sunday, 15 September, at 5 p.m. in AHI headquarters, 21 West Park Row, Clinton, New York.  AHI President Robert Paquette will speak on “Federalist #39 and the Coming of the Civil War.” 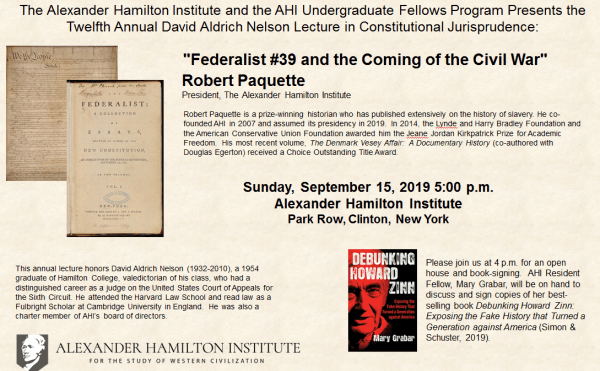 The annual event will be preceded by an open house, beginning at 4 pm.  Resident Fellow Mary Grabar, whose recently published book, Debunking Howard Zinn: Exposing the Fake History That Turned a Generation against America, has reached best-seller status on Amazon, will be on hand for a book-signing.  The event is open to the public; food and refreshments will also be available.

The annual lecture honors David Aldrich Nelson (1932-2010), a 1954 graduate of Hamilton College, valedictorian of his class, who had a distinguished career as a judge on the United States Court of Appeals for the Sixth Circuit. He attended the Harvard Law School and read law as a Fulbright Scholar at Cambridge University, in England.  He was also a charter member of AHI’s board of directors. 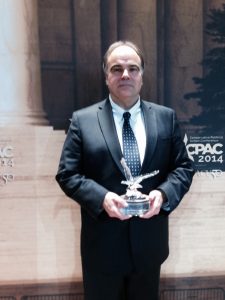 Robert Paquette is a prize-winning historian who has published extensively on the history of slavery. He co-founded AHI in 2007 and assumed its presidency in 2019.  In 2014, the Lynde and Harry Bradley Foundation and the American Conservative Union Foundation awarded him the Jeane Jordan Kirkpatrick Prize for Academic Freedom.  His most recent volume, The Denmark Vesey Affair:  A Documentary History (co-authored with Douglas Egerton) received a Choice Outstanding Title Award.  Paquette describes his lecture as “a reflection on a word, found in neither the Declaration of Independence nor the Constitution, that contributed decisively not only to southern secession, but to the growth of the modern state.”