In 2018, the Alexander Hamilton Institute for the Study of Western Civilization (AHI) announced that its annual summer conference, co-sponsored with Baylor University’s Department of Political Science, would be renamed the Mary and David Nichols Annual Conference in the Great Books. In doing so, AHI honored two outstanding professors who had thrown their support behind AHI from its inception.  In creating the co-sponsored conference, the Nichols had in mind not only the directed discussion of prescribed readings by preeminent scholars but on-the-job training of graduate students who would mix with seasoned professors on the panels.

The Covid pandemic forced cancellation of last summer’s program. But thanks to Dr. Timothy Burns, Professor of Political Science and Graduate Program Director, Baylor University, and Dr. Clint Condra, who earned his Ph.D. in political science at Baylor, the annual summer conference has returned.  It will take place June 11-13 at the Treasure Valley Classical Academy in Fruitland, Idaho, and will focus on “Patriotism Ancient and Modern.”  Dr. Condra teaches at the Treasure Valley Classical Academy in Fruitland. The schedule of events can be found here. Readings for each session can be found as below: 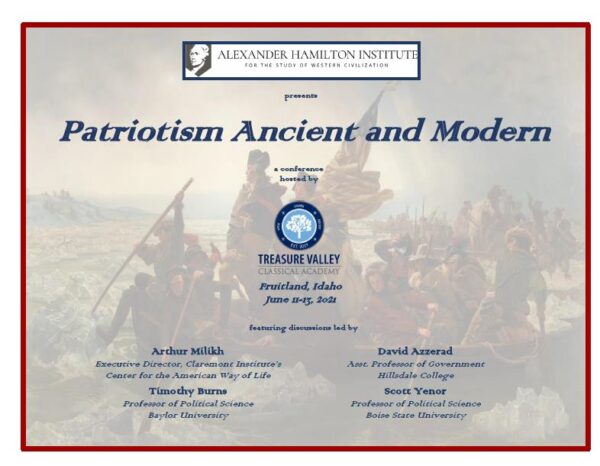 “Distinguished scholars Scott Yenor of Boise State University, David Azerrad of Hillsdale College, Arthur Milikh of the Claremont Institute Center for the American Way of Life, and Timothy Burns of Baylor University will join other professors and graduate students from Baylor University, members of the Treasure Valley Classical Academy faculty and staff, and other friends and supporters of TVCA on the school’s campus in Fruitland, Idaho for this conference,” observed Dr. Condra.  “It will consist of a series of panel discussions based on readings from the writings of America’s and Western Civilization’s greatest statesmen and thinkers, which promises to be rewarding to all who attend. The Treasure Valley Classical Academy is a charter school dedicated to the formation of future American citizens of virtue and knowledge.”

Dr. Burns, an AHI Senior Fellow and head of AHI’s newest affiliate, AHI West, explained the purport of the conference. “Until quite recently the patrios, or fatherland, was an object of admiration, pride and devotion, summoning citizens to a life together with their fellow citizens that transcended the interests of each. It was thus an inspiration to virtue and, not unreasonably, held to be under the watchful eye of gods or God. This conference seeks, first, to uncover and re-examine the pre-modern attachment to the patrios—pre-modern patriotism. Second, it seeks to understand the role that an appeal to patriotism had in the launching of modernity, to understand what in modernity stood or stands against patriotism, to understand why and how patriotism has endured or how modern regimes remain infused with it. We seek to understand what is most appealing about patriotism and the appeals against it that are being made in the name of both identity politics and cosmopolitanism.”

The first session, on ancient patriotism, will be led by Dr. Burns. “We will examine selections from the writings of Herodotus, Thucydides, Aristotle, and Cicero, in an effort to uncover the appeal of patriotism to the moral sense of citizens, its relation to belief in just gods or God, its relation to moral virtue, its relation to particular political orders (democracy, aristocracy, oligarchy), as well as its place in a thoughtfully happy life.”

In the second session, Scott Yenor, Professor of Political Science at Boise State, will lead a discussion of the founding of the modern nation-state as it appears in the writings of Machiavelli, who saw patriotic devotion to that state as a way to bring political order to a people while resisting the church and its moral order.

In the third session, looking at selections from the works of Tocqueville, Dr. Yenor will lead an exploration of the eventual ground that developed for that nation-state, in an amalgam of the principles of individual rights and honorable devotion to the nation.

Arthur Milikh, Executive Director of the Claremont Institute’s new Center for the American Way of Life in Washington, DC, will lead the fourth and fifth sessions. These will focus on the thought of J.J. Rousseau on modern patriotism. The fifth session will consider the first half of Rousseau’s Letter to D’Alembert, in an attempt to uncover Rousseau’s presentation of Enlightenment as anti-patriotism.

The sixth will consider the second half of the letter, and the dichotomy that emerges in it between Patriarchy/ Patriotism, on one hand, and Cosmopolitan Gynocracy, on the other.

David Azerrad, Assistant Professor and Research Fellow at Hillsdale College’s Van Andel Graduate School of Government in Washington, D.C., will conduct the final two sessions of the conference. These will be devoted to understanding American patriotism and its critics.

“The Fruitland Conference promises to be an intellectual feast of the richest viands,” said AHI President Robert Paquette.  “It will take place in a breathtakingly beautiful setting in front of an audience deeply interested in the future of the country.  AHI owes a great debt to the Nichols, Tim Burns, and Baylor’s political science department.  We could not be more pleased with the work they have done.”