The Alexander Hamilton Institute for the Study of Western Civilization (AHI) in pleased to present Manhattan Institute Senior Fellow Steven Malanga on “How Many Detroits Are There?” Wednesday, April 23 at 7:00 p.m., Room 127 (Red-Pit), Kirner-Johnson Building, Hamilton College. The presentation is open to the public. 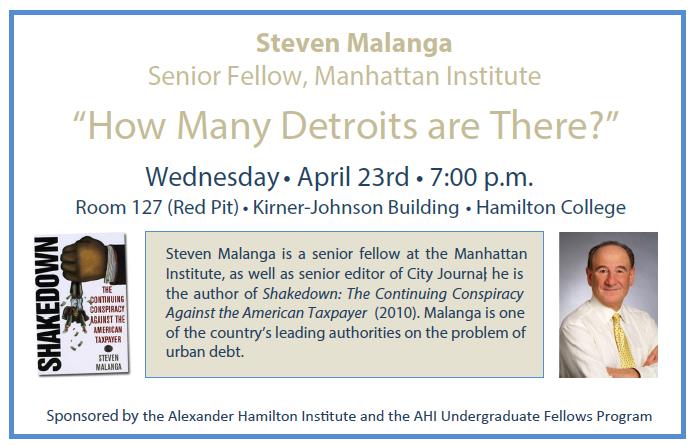 Steven Malanga is recognized as one of the country’s leading authorities on the problem of urban debt, which is bankrupting or threatening to bankrupt many major American cities.  He is a Senior Fellow at the Manhattan Institute as well as a senior editor of City Journal. Prior to joining City Journal, Malanga was executive editor of Crain’s New York Business. In 1995, Malanga was a finalist for a Gerald Loeb Award for Excellence in Financial Journalism for the series “Nonprofits: New York’s new Tammany Hall,” which he co-authored. In 1998, a series he co-authored, “Tort-ured State,” about the influence of trial lawyers in New York State, was voted best investigative story of the year by the AABP. The previous year, a computer-assisted project that Malanga designed, reported, and wrote on Small Business Administration loans in New York City was voted one of the year’s best investigative stories by AABP.

Malanga has also written articles on various topics for The Wall Street Journal, the New York Daily News, the New York Post, and other publications. His many publications include ‘Shakedown: The Continuing Conspiracy Against the American Taxpayer” (2010), The New New Left (Ivan R. Dee, 2005) and The Immigration Solution: A Better Plan Than Today’s (Ivan R. Dee, 2007), co-authored with Heather Mac Donald and Victor Davis Hanson.