The Alexander Hamilton Institute for the Study of Western Civilization (AHI) congratulates Alex Klosner, of Ilion, New York, one of the current leaders of the AHI’s Undergraduate Fellows Program, on accepting a position with M&T bank in Washington D.C.  Alex follows in the footsteps of AHI alumnae Sarah Larson, who works for M&T Bank in New York City.  Alex accepted a position in the management development program and will begin the year-long training program for recent college graduates in July. He graduated from Hamilton College in December 2016 with an economics major and government minor. 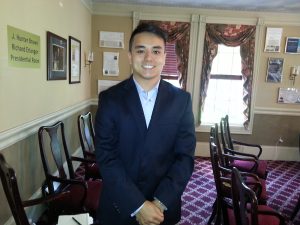 The program at M&T provides intensive training in leadership, communication, and finance and offers networking opportunities within the bank. The company recruits from elite schools; applicants must have a cumulative GPA of 3.0 or above and must display strong interpersonal and analytical skills, as well as excellent written and verbal communication skills.  “I’m really excited to start working for this phenomenal company,” says Alex, adding that he’ll be in a city that he loves.

Before he moves to Washington from his hometown in nearby Ilion, New York, Alex will take a three-week “Grand Tour” of Europe, returning to Florence where he spent a semester abroad with a host family. He plans on returning to Rome and visit the cities he did not get to see at that time: London, Paris, Perugia, Venice, and Munich.  Alex graduated a semester early in December, and wants to capitalize on the time to relax, read, work part-time, and travel. “I probably won’t have this kind of time off again until retirement,” he said.

Alex credits the nurturing by and networking opportunities at AHI for help in obtaining the position. He became involved in the AHI during his freshman year. He has sampled a wide range of AHI programmatic activities, participating in reading groups, leadership dinners, and social events. He learned about the M&T Bank program through his friend, and former AHI undergraduate leader, Sarah Larson, whom he met through AHI events. She had completed the same program after graduating from Hamilton in 2015. Alex also credits AHI for opening the door to the Charles Koch Institute with a summer fellowship in 2015.  Alex was also actively involved in the Republican Club on campus and in summer 2016 worked as a volunteer intern on the Congressional (District 22) primary campaign for Republican New York State Assemblywoman Claudia Tenney. She won the three-way race in November.

Another activity that proved to be of great benefit to Alex was writing articles for the AHI-sponsored student newsletter, Enquiry. Alex wrote on topics in economics, politics, and international affairs. He said he found the experience to be very valuable.  “I absolutely believe.” he stated, “that writing for the publication has not only improved my writing skills, but allowed to me think deeply and critically about public policy issues.” At AHI events Alex has demonstrated his ability to articulate his ideas and share the benefits of its programs in an engaging manner. Fresh off the Tenney campaign, he gave a short impromptu talk in 2016 at the AHI’s annual Constitution Day event.

Alex credits AHI with opening many doors both directly and indirectly to career opportunities. He gives no less credit to the lifelong benefits of intellectual growth, stating, “From guest speakers to reading groups, my involvement with the AHI has broadened my knowledge of the world and its history. Particularly, I learned to admire the contributions of Western Civilization to the overall progress of humanity. Without the AHI, I would have had no exposure to the works of classical liberals such as Edmund Burke, Friedrich Hayek, John Stuart Mill, and Alexis De Tocqueville.”  Noting the competitiveness of the M&T Bank program, as well as Alex’s other curricular and extracurricular accomplishments Robert Paquette, AHI Executive Director, praised Alex for his work ethic and seriousness of purpose.

“Alex,” Paquette observed, “is one of the most honorable young persons I have met during my thirty-six years of teaching. A middle-class kid from a small-town public high school, he is the kind of young man who surmounts difficulty by rolling up his sleeves and pouring sweat into the assignment, rather than whining because of this or that grievance or this or that disadvantage.  His intellectual growth under AHI nurturing was truly impressive.”