The Alexander Hamilton Institute for the Study of Western Civilization (AHI) congratulates Philip J. Parkes on having been awarded a prestigious seat at the American Enterprise Institute’s Summer Honors Program. This highly competitive program, which ran from June 1-June 15, provides “a public policy and career development opportunity for undergraduate student leaders.” 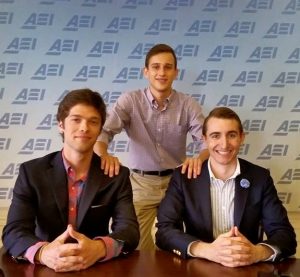 Parkes, a history major at Hamilton College from Camillus, New York, received a stipend and travel and housing vouchers to support two weeks of engagement in hot-button public policy issues under some of Washington’s finest free-enterprise scholars. Each week consisted of policy debate and analysis on topics ranging from national security strategy to entitlement reform. In the second week, Parkes teamed up with other participants to work on the “front lines” of U.S. workforce research using real-time census data to study labor force participation rates. His findings will contribute to a forthcoming publication by an AEI scholar

The internship also provided valuable networking opportunities. Parkes conversed with journalist Jonah Goldberg (of National Review), former U.S. Congressmen Newt Gingrich, and former deputy Assistant U.S. Attorney General John Yoo. “One of the most exciting things about the program,” Parkes observed, “was the high caliber of the other student participants. From Fulbright and Truman scholars to regularly published journalists and widely-syndicated political talk show hosts, the ideologically diverse group challenged my beliefs and helped widen my grasp of global politics. AEI’s approach to policy analysis reminded me in many ways of the AHI. Each values evidenced argument over superficial rhetoric and is not afraid to recognize what makes the United States exceptional among other nations. More importantly, each makes an effort to welcome intellectual dissent as an opportunity to grow, not a threat from which to be insulated. I am deeply grateful to Professors Paquette and Ambrose for their work with the AHI, and especially to Professor Paquette for his willingness to mentor me both inside and outside the classroom. The AHI has been a delightful place to grow intellectually and as a person.”

“Phil Parkes,” AHI Charter fellow Douglas Ambrose observed, “is the kind of student for whom we history professors pray: curious, engaged, and sincerely interested in understanding the people he studies. In my “Christianity in America” course, Phil impressed me with his willingness to take his human subjects seriously. He grappled with the often complex and even paradoxical character of various belief systems, never succumbing to the temptation to dismiss such systems as nonsensical or judge them simply as rationalizations for oppression or self-interest. Phil knows that historical understanding requires the student to maintain a certain humility, a recognition that the assumptions and convictions of our times often interfere with our efforts to penetrate the minds and hearts of past peoples. And that humility allows the student to be open to the wisdom those past peoples may have possessed and may still pass on. A true lover of knowledge, Phil has participated in numerous AHI special events, including my reading cluster on the Catholic philosopher Josef Pieper. He is also a talented musician and photographer. All of us at the AHI are proud of his having earned an internship at AEI, and we know that his love of learning, his admirable work ethic, and his exemplary character will make him a most valued asset at AEI.”

AHI Charter Fellow Robert Paquette has also taught Parkes. “I have gotten to know Mr. Parkes quite well during the past year,” said Paquette. “During the summer, while working at Hamilton College, he visited the independent AHI and took part in a conference on Alexis de Tocqueville directed by Jim Ceasar of the University of Virginia as well as in other programming. During the fall semester, he participated in almost every event the AHI sponsored. He shows a high-level of intelligence and a willingness to grapple with difficult texts in reading groups and at our Leadership Dinners with distinguished guests. During the fall semester, he attended my course ‘Revolutions,’ which undertakes a comparative study of four revolutions during the so-called age of democratic revolution: the American Revolution, the French Revolution, the Haitian Revolution, and the Spanish American revolutions. The course has a daunting reading load that includes cover-to-cover reading of Gordon Wood’s Creation of the American Republic and William Doyle’s Oxford History of the French Revolution. Mr. Parkes came to class chomping at the bit to engage the material; he asks intelligent questions; he writes well; and he has a fine analytical mind. Indeed, Mr. Parkes is the embodiment of what a traditional liberal arts education strives to achieve. He is a talented photographer, artist, and musician with broad interests in physics, philosophy, history, political science, and economics. That he won this award as a sophomore in competition with older students speaks volumes about his gifts.”