Philip Parkes, Undergraduate Fellow at the Alexander Hamilton Institute for the Study of Western Civilization (AHI), spent a busy summer gearing up for his senior year. While his immediate post-graduation plans are still undecided, he is confident that his major in history and minors in economics and philosophy, along with his experiences at AHI, have prepared him well for a future in the law. 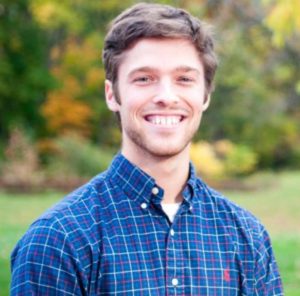 In addition to serving as a law clerk at the Frank H. Hiscock Legal Aid Society in Syracuse, New York, near his hometown of Camillus, he spent a week in July as a Supreme Court Fellow at the Roger Hertog Foundation in Washington, D.C.  The experience at Hiscock acquainted Phil with the day-to-day practices involved in handling legal cases.  At the Hertog Foundation, he participated in seminars with students of varying ideological points of view from around the world.  They focused on Supreme Court cases and methods of legal interpretation. A distinguished group of visiting scholars and Supreme Court litigators delivered lectures:  Randy E. Barnett, Carmack Waterhouse Professor of Legal Theory at Georgetown University Law Center, and Director of the Georgetown Center for the Constitution, one of the lawyers who represented the National Federation of Independent Business in NFIB v. Sebelius (2012), a landmark case on the legality of the Affordable Care Act;  James Burnham, associate, JonesDay, one of the lawyers representing the Noel Canning Corporation in NLRB v. Noel Canning (2014); and Alan Gura, name partner, Gura & Possessky, who has argued twice successfully before the Supreme Court.

The Hertog Foundation, a non-profit educational organization, “offers several highly competitive and selective educational programs for outstanding individuals who seek to influence the intellectual, civic, and political life of the United States.”  The program typically attracts more than 600 applicants for 30-40 fellowships.  Successful applicants must maintain a high GPA ranking in their respective home institutions and have a proven track record of aptitude for political philosophy.

Phil certainly met the standards. In his first year, he won a school-wide grant to research the history of aggressive cancer screening in the United States and has remained on the Dean’s List since his first semester. As a teacher’s assistant for an introductory logic class, he turned office hours into “fun weekly sessions for debate,” what he calls “nerding out over arguments,” while he tutored students and helped grade homework assignments.

Phil has found time to work in Hamilton College’s Office of Admissions and Career Center, first as a tour guide and currently as a Law Alumni Networking Associate. His duties include conducting research on the alumni presence in “big-law” law firms, and designing and leading “live” workshops and panels that connect students to law alumni.

Phil became involved with the AHI at the beginning of his sophomore year.  “Although I had really enjoyed my regular class work, I liked the idea of rounding things out with additional programming and reading groups,” he said, adding, “I really threw myself into it, writing for Enquiry and running a Publius Society meeting with Taylor Elicegui. Just like Taylor said in her interview, I saw or at least tried to see the AHI as a supplement to everything else.” Charter Fellow Douglas Ambrose who has had Phil in both classes and AHI-sponsored reading clusters, has called him “curious, engaged, and sincerely interested in understanding the people he studies.  He is a true lover of knowledge.”

Other AHI activities included spending a month in the summer of 2015 living and working at AHI as a student intern. Phil helped plan the 2015 AHI-Baylor University summer conference on “Churchill and de Gaulle: Statesmanship in a Democratic Age” and then participated in its discussions. He also sat in on an AHI board meeting, something he calls an “invaluable experience.” As one of AHI’s involved student fellows, he presented the student’s perspective, and provided insights into programming and public relations.  The board meeting made me realize two things: first, that I loved the concept of debate, and second, that I cared a lot about the direction the AHI was taking.” AHI Executive Director Robert Paquette has taught Phil and worked with him extensively outside the classroom.  “Phil Parkes has one of the most versatile intellectual aptitudes of any student whom I have taught,” Paquette observed.  “He has many interests, and whatever he does, he does at a high level.  His receipt of both an American Enterprise Institute summer fellowship and a Hertog Foundation fellowship against undergraduate competition from around the world speaks for itself.”

Phil credits the AHI for helping him with his summer fellowships. It was AHI resident fellow, Dr. David Frisk, who made him aware of the American Enterprise Institute. The two-week Washington, D.C., program consisted of debate and analysis with such top policy-makers and analysts as journalist Jonah Goldberg, former U.S. Congressman Newt Gingrich, and former deputy U.S. Assistant Attorney John Yoo, and then doing census research on work force participation for an AEI publication.  Phil describes Hertog as “a kind of sister program,” with “a lot of ‘people’ overlapping,” that he had learned more about while at AEI.  “After doing AEI in summer of 2015,” he said, “Hertog was a natural fit for the following summer. Each program has tremendous things going for it.”

Not only has AHI been instrumental in making introductions and connections, it has given Phil, as he puts it, “that opportunity to demonstrate and develop my interests in politics and political philosophy.”  As a very broad liberal arts student who “happened to have studied political philosophy pretty deeply compared to the average student (through AHI)” he was able to stand out against students who majored specifically in political philosophy or political science.

Even with all these activities, Phil has found time for music and sports; he was during his first three semesters the principal cellist of the Hamilton College Orchestra, an avid squash and tennis player, and co-founder of the Hamilton Powder Club, which aims to make skiing and snowboarding more affordable for Hamilton students and more accessible for beginners. Successfully making the case for funding in front of student assembly ($20,000 over three semesters) was “probably the finest exercise in public speaking I’ll ever receive, and no doubt the most fun, too,” Phil says, suggesting those skills would be very useful in a courtroom. Last semester, he helped organize skiing trips on six consecutive weekends, and the previous semester, as president, he led thirty-eight students on a three-night trip to Killington, Vermont.

He encourages students to fit in activities at the AHI: “To other students, I would say that the AHI, at its core, is about adding to the Hamilton educational experience. In its best form, the AHI can truly be a resource for everyone.  At the end of the day,” he adds, “while I am really grateful to the AHI for all of the specific programming they offered, for the networking opportunities and for the chance to hone writing skills, what I am really going to take away is the love of learning. Because who doesn’t love learning more than people who keep it going outside of the regular classroom? That’s what brought me to the AHI, and I think that’s what makes me continue to appreciate it.”