On Saturday, May 6, 2017, the Alexander Hamilton Institute for the Study of Western Civilization (AHI) recognized Elizabeth Barry, Taylor Elicegui, Amy Elinski, Alex Klosner, and Phil Parkes, five senior leaders of its undergraduate fellows program at Hamilton College. Friends, parents, and AHI fellows attended the reception and banquet, which was held at AHI headquarters in Clinton, New York.  Each undergraduate fellow received multiple gifts from the AHI, including subscriptions to The New York Review of Books and The New Criterion. 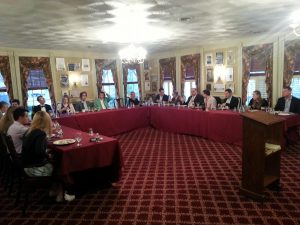 AHI Executive Director Robert Paquette launched a round of impromptu remarks about the five fellows whom he has come to know through both his classes taught at Hamilton College and years of AHI activities.   He began with Taylor Elicegui who attended his “Revolutions” course during her sophomore year.  In that course, Paquette confessed, he came the closest he had ever come in his 36-year career to awarding an A+ on a paper, the one she had written on the meaning of “republicanism” during the American Revolution.  A dean’s list student from Reno, Nevada, Taylor was awarded the senior prize given by Hamilton College’s government department to “the outstanding senior concentrator.”  Her academic success has paid off in an “embarrassment of riches” from law schools that offered her admittance and scholarships.  She “chose well,” the University of Virginia School of Law, in Paquette’s opinion among the top three law schools in the country.   It boasts such outstanding professors as Caleb Nelson, an AHI academic adviser and son of the noted federal judge David Aldrich Nelson (1932-2010), a charter member of the AHI’s board of directors who served with distinction on the United States Court of Appeals for the Sixth Circuit. Taylor’s passion for law and politics was evidenced by internships with Democratic U.S. Senator Kirsten Gillibrand and Senate Majority Leader Harry Reid.   Taylor provides proof, Paquette noted, that AHI has “no political litmus test” for undergraduate membership and, indeed, nurtures students who span the political spectrum. 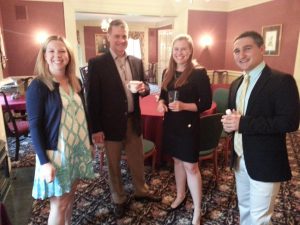 Amy Elinski from Wickenburg, Arizona, majored in both history and government at Hamilton College.  She has had a long-standing interest in national security and has won several summer internships with national security organizations.   She was one of 19 students chosen to participate this summer in the second annual AHI-sponsored WAPONS program (Washington Program on National Security) in Washington, D.C., directed by AHI Senior Fellow Dr. Juliana Pilon.  Paquette described Amy as a young person who is a “true individual,” one “very secure in her skin,” who has shown “enormous courage” under fire in defending her patriotic beliefs.  He described her notable intellectual growth under AHI nurturing, noting in particular how well she responded to criticism of her prose. “The country will be a better place,” said Paquette, “with Amy working in national security.”

Paquette described undergraduate fellow Phil Parkes as “Mr. Versatility.” Phil, a history major,  was awarded two prestigious internships while an AHI undergraduate fellow:  as a Supreme Court Fellow at the Roger Hertog Foundation in Washington, D.C., and as a fellow at the American Enterprise Institute, also in Washington, D.C.  For his outstanding work in American history, Phil was recently awarded the Putnam Prize by Hamilton College. This summer Phil plans to prepare for the LSAT (law school admissions test) while working in his hometown of Syracuse, New York.   He intends to take advantage of the city’s civic life by linking up with Syracuse University’s summer orchestra (Phil is an accomplished cellist), “in addition to piling on what I hope will be a substantial reading load and perhaps a trip to the AHI!”  He also hopes to begin a full-time position, potentially as a paralegal, for the year in between law-school applications and the beginning of law school in the fall, 2018.

Alex Klosner, an economics major from Ilion, New York, graduated from Hamilton College a semester early and has spent the spring semester 2017 working as an AHI intern.  In a sense, Alex joined the AHI even before his matriculation at Hamilton because he had sounded out AHI undergraduates as to what life would be like at Hamilton College for a conservative student from a rather nondescript public high school in upstate New York.  Like Amy Elinski, Alex showed “extraordinary intellectual growth” after four years of AHI nurturing and more than met the high standards of the most demanding professors.   “Alex is a gifted young man dressed in a blue-collar shirt,” said Paquette.  “He is not afraid of hard work and brings five-star character to whatever task he is assigned. The AHI tips its hat to Alex’s parents, who did one helluva job raising him.” Alex will be moving to Washington, D.C., this summer to begin a job with M&T Bank.

Liz Barry, a history major from Chappaqua, New York, served as editor-in-chief of the AHI-sponsored student newsletter Enquiry and head of the Hamilton College Republican Club.  She came to the AHI at the end of her sophomore year after taking from Professor Paquette a course “Tocqueville’s America,” which she described as “transformational.”  At the recent AHI undergraduate conference held at Colgate University, Liz gave a “mature and impressive performance” as she presented her research on the anti-Masonic movement.  At the recognition ceremony, Paquette acknowledged not only Liz’s drive and intellectual quality, but her “grace under fire.”  After the presidential election, she was accosted multiple times on the Hamilton College campus by activist students and a Hamilton College professor apparently because of her conspicuous role as leader of both the Republican Club and AHI Undergraduate Fellows Program.   For fortitude under fire, Liz received a special book prize from the AHI. The intimidation factor, Paquette noted, helps explain the remarkable decline of membership in the Republican Club at Hamilton College from a number approaching 100 two decades ago to a core group of about six in 2016-17. 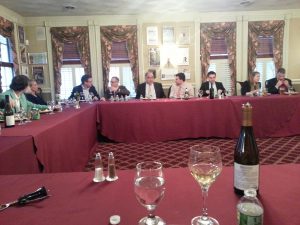 AHI fellows in attendance also made impromptu comments. Professor Douglas Ambrose encouraged students to continue to keep their “faith” in intellectual pursuits. Chris Hill expanded on the message, stressing the importance of believing that “ultimately truth will win out.” Resident fellow David Frisk discussed the relationship between crisis and opportunity, noting, as he read from the writings of the British philosopher Michael Oakeshott, that today’s campus and societal censors are more determined than ever to impose their will.  Mary Grabar, who recently spoke at the annual conference at the Center for Vision and Values on the campus of Grove City College, described her positive impressions of students there, and said it was like “being on a campus full of AHI undergraduate student leaders.” The poise, politeness, and intellectual curiosity of both groups impressed the 20-year veteran of college teaching.

The honored students addressed the gathering as well, relating stories both funny and inspiring. Amy Elinski recalled being “roped into” the AHI by former AHI undergraduate fellow Sarah Larson, now a young executive at M&T Bank.  Amy decided to become a history major after enrolling in the Old South history course, co-taught by professors Ambrose and Paquette. The AHI was definitely “a formative part of my Hamilton experience,” she said.  For Phil Parkes, the AHI reminded him to “know thyself” (to borrow from Socrates).  Alex Klosner recalled being transformed by writing his paper on “John Adams: Radical or Conservative?” in Paquette’s  “Conservative Thought” class, and in the process he made some of his best friends through AHI. Liz Barry expressed her regret that she had not become involved with AHI sooner.

A number of sophomores and juniors also attended the celebration. One noted the profound effect the Old South course had on him. “It changed everything,” he said.  Professors like Paquette and Ambrose are “the linchpins of a solid liberal arts education. Hamilton College is fortunate to have them. I will remain ever grateful to them, and the AHI, for their help especially in improving my writing.”

As they prepare to leave for jobs and further education, the senior AHI undergraduate fellows provided additional reflections in writing.  Liz Barry wrote, “I can confidently say that I would not be the same person I am today without the AHI. Being a part of the undergraduate program has afforded me the opportunity to meet some incredible people, scholars and students alike, and to expand my intellectual horizons. I am grateful to have been a part of something so special these past few years.”

“The AHI presented me with a range of perspectives and ideas on topics I had never before considered,” said Taylor Elicegui, “ranging from architecture to free speech. Through my experiences at the AHI, I learned to articulate my beliefs and effectively support them with evidence. I met some incredible individuals, including Michael Munger, who filed an amicus brief in Citizens United. I also made some lifelong friends (Alex, Liz, and others) that I will treasure for years to come.”

Alex Klosner reflected back as he prepared for his move to Washington: “Throughout my four years at Hamilton College, I have benefited immensely from the AHI. From high-powered speakers to reading clusters, AHI events have broadened my knowledge of the world and its history. Without the AHI, I would not have learned about the importance of studying Western Civilization and classical liberal ideas. I have made some of my best friends through the AHI over the years, and I know my time spent here will positively impact me for the rest of my life.”

Phil Parkes wrote, “It would be difficult for me to list all of the things I appreciate about the AHI in the limited space available to me here. It is equally difficult to summarize the impressive and I might say comprehensive array of programming organized by its leaders, student and faculty, over the years of my time at Hamilton. But I think it suffices to say that the intellectual rigor and interpersonal graciousness I had the privilege to imbibe at the AHI will remain with me wherever I go.”