David Frisk, Resident Fellow, The Alexander Hamilton Institute for the Study of Western Civilization (AHI), is completing a major intellectual biography of the political theorist Willmoore Kendall.  For Law & Liberty, a website devoted to the classical liberal tradition and “how it shapes a society of free and responsible persons,” he recently published an essay on one of Kendall’s most influential books.

The editors asked Dr. Frisk to discuss The Basic Symbols of the American Political Tradition on the 50th anniversary of its 1970 publication. Two days after running his essay, “Recovering America’s Constitutional Morality,” Law & Liberty published several lists of books recommended by its contributors for summer reading, including one requested from Frisk.  “It’s always been an honor and a good experience to write for Law & Liberty,” he said.  “It is a well-respected site, sponsored by Liberty Fund, that publishes high-quality work week after week. It is also good exposure for my upcoming book on Kendall, for my writings elsewhere, and for AHI.” 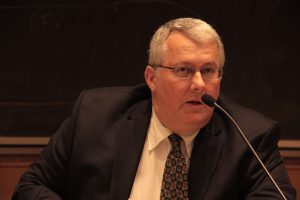 In his essay on Basic Symbols, a work widely known among scholars, he explains how Kendall and his junior writing partner, George Carey, interpreted what they considered the true meaning of the American Founding and system of government—in contrast to the one that “progressive” historians and political scientists have promoted for, by now, the past century.

Their short book has been highly influential among many American conservatives, due partly to the intellectual strength of—including the evidence for—its main idea and partly to the fact that Kendall, a mentor to William F. Buckley Jr. at Yale, was a major intellectual leader of the conservative movement who had already earned the great respect and admiration (as did Carey) of many of its writers and scholars.

Basic Symbols, Frisk writes, “was a pioneering effort to counter what these dissenting political scientists called ‘the official literature’ on the American Founding: the view of Progressive Era interpreters (following Abraham Lincoln’s similar understanding) that it was dedicated foremost to individual rights and equality, and that the American political system, as ideally conceived, is likewise dedicated to these principles. In the authors’ view, the progressives were responsible for a ‘derailment’ of the American tradition because they so wrongly misinterpreted it, displacing majority rule or self-government and a virtuous political civility from their rightful pre-eminence therein.”

In his list of summer reading recommendations for Law & Liberty readers, Frisk discusses four books:  The Righteous Mind: Why Good People Are Divided by Politics and Religion (2012) by social psychologist Jonathan Haidt;  Rights Talk: The Impoverishment of Political Discourse(1991) by Harvard law professor Mary Ann Glendon;  The Impossible Presidency: The Rise and Fall of America’s Highest Office (2017) by historian Jeremi Suri;  and Fear Itself: The New Deal and the Origins of Our Time (2013) by political scientist and historian Ira Katznelson.

With research assistance from AHI’s current crop of summer interns, Dr. Frisk is writing a biography of Kendall, to be published by Encounter Books. A resident fellow at AHI since 2013, he teaches its popular adult education courses in political science, history, and political philosophy. This summer he is leading a reading group of Hamilton College students, by weekly online video discussion, focused on American conservative thought.