On Monday, October 14, The Alexander Hamilton Institute for the Study of Western Civilization (AHI) inaugurated an annual lecture devoted to the life and times of Christopher Columbus.  The lecture forms part of a new initiative, named after Alexander Hamilton, designed to promote the serious and honest study of history.  AHI Charter Fellow Douglas Ambrose spoke on “Telling American Stories:  Columbus Day in History.” 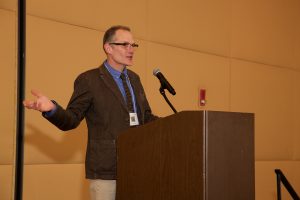 In introducing Professor Ambrose, a winner of multiple teaching prizes at Hamilton College, AHI President Robert Paquette stated that “if the culture of this country were healthier,” AHI “would not have seen the need to initiate the annual lecture.” AHI Resident Fellow Mary Grabar, in the first chapter of her best-selling book, Debunking Howard Zinn:  Exposing the Fake History that Turned a Generation against America (Regnery, 2019) shows how much of the trendy Columbus-bashing derives from a rancid Marxist polemic, passing as history, that has sold millions of copies and insinuated itself uncritically into the classrooms of high schools and colleges.

“On college campuses, including at Hamilton College,” Paquette pointed out, “defensive administrators may give thanks if Columbus Day passes quickly and silently into Tuesday’s classes. . . Columbus Day in the United States in 2019 has turned into an occasion on which the generality of Americans, the beneficiaries of Western civilization, will allow themselves to take another mugging from the transformationalists.  In the campus theater near you, the trashing of Western European explorers and settlers as rapists and murderers typically comes served with the buttered popcorn of the noble savage.”  To read some accounts by “revisionist” historians, Columbus, by initiating sustained contact between Old World and New, would appear to stand indicted for pretty much everything that has gone wrong in the world since his maiden voyage. . . Activists appear to think that history post-1492 is like a long neat row of dominoes with Columbus at the beginning and perhaps now with Donald Trump at the end. In truth, Columbus sailed from an Old World of war, colonization, servitude, and immiseration to a New World of war, servitude, colonization, and immiseration. Western Europeans did not introduce slavery or genocide into the Americas.”  It was there already, in abundance.

In the inaugural lecture, Professor Ambrose focused on the way in which Columbus, and eventually Columbus Day, have figured in the imagination and memory of Americans.  Columbus attracted little attention for the first 150 years of European settlement of North America, but Americans started to invoke him around the time of the American Revolution, as “Columbia” quickly became a symbol of national distinctiveness as Americans sought to distance themselves from “Brittania.” King’s College in New York City became Columbia College, and the new national capitol was the “District of Columbia.”  Columbus himself really came of age in the American imagination in the early nineteenth century.

Perhaps the most influential force in this cultural process was Washington Irving’s popular multi-volume biography of Columbus, which first appeared in 1828 and was to go through scores of editions in the decades that followed.  Columbus, Ambrose suggested, became a central figure in the evolving notion of America’s unique and even providential destiny.  His discovery of the New World served as the beginning of a process that was coming to culmination in the United States.  This nationalist appropriation of Columbus reached its zenith in 1892 and 1893.

In 1892, the United States government and various city and state governments celebrated the 400th anniversary of Columbus’s first voyage by staging elaborate parades, civic gatherings, speeches, and church services. President Benjamin Harrison issued a proclamation asking Americans to observe Columbus Day by reflecting on Columbus as “the pioneer of progress and enlightenment.” Americans, Harrison noted, continue to contribute to “progress and enlightenment” through its public schools, and Columbus Day 1892 witnessed public schools across the country celebrating Columbus and “his” country, the United States.  The Colombian Exhibition of 1893 in Chicago, the largest world’s fair to have ever taken place at the time, further attached Columbus to the theme of American material and cultural progress.

Even as Columbus became part of the emerging national civil religion, he also proved vitally symbolic and significant to to other groups in late nineteenth-century America: Catholics and Italians.  The Knights of Columbus, founded by predominantly Irish Catholics in 1882, appealed to Columbus’s Catholicism as a way to confront the hostility and discrimination they faced from nativist Protestant Americans.  By reminding these Americans that Columbus, the personification of America, was Catholic, people like the Knights hoped to prove the compatibility of Catholicism with Americanism.

As American Catholics highlighted Columbus’s faith, Italian immigrants and their descendants highlighted Columbus’s ethnicity.  Although no Italian nation existed in 1492 (and, in fact, did not exist until 1861), and Columbus would probably have not considered many of the immigrants from south and central Italy his “countrymen,” immigrants from all parts of Italy claimed him as their own.  These Italian-Americans proved instrumental in finally getting Columbus Day recognized as a holiday, first on the state level beginning in Colorado in 1907 and culminating in 1968 with the creation of the federal holiday.

Ambrose concluded by noting some of the ironies of this history.  Columbus has served as both the embodiment of American national identity, but also as a distinctly Catholic figure for many Catholics and as a distinctly Italian one for Italian-Americans.  Colorado became the first state to observe Columbus Day annually as a state holiday, but its legislature is now moving toward repealing the holiday next year.  Many think the holiday has been around for generations, but some states have never celebrated it and the federal government only made it a holiday a little over 50 years ago.  Both Catholics and Italians faced discrimination and hostility and hoped to use Columbus and Columbus Day to gain inclusion into the American mainstream.  Now many see Columbus and Columbus Day as markers of hostility and discrimination.

“In commemorating Columbus Day,” Paquette observed, “the point should not be to ignore or absolve Columbus, the Spanish, or anyone else of their prejudices or their complicity in horrible acts, but to suggest the complexity of history in all of its ignorant, unsentimental, and tragic unloveliness.  Commemoration and celebration are not the same thing. AHI intends to commemorate—to preserve into memory—a remarkable man who ushered in an epoch, that is a distinctive period of human history.  As AHI always tries to do, we will seek to elevate the debate, with no punches pulled, to understand an event that brought peoples from four continents into sustained contact.  Our series will be nothing less than an honest, studied engagement with the history of the Atlantic world— Western Europe, Western Africa, and the Americas—a subject in which AHI leaders, fellows, and advisers have a track record of accomplishment.”