Previous Next
AHI’s Juliana Pilon to Speak at Cato, October 16 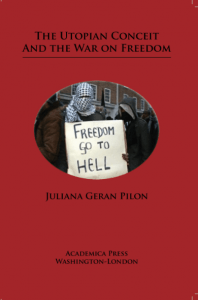 Juliana Geran Pilon, Senior Fellow, The Alexander Hamilton Institute for the Study of Western Civilization, will speak on her new book, The Utopian Conceit and the War on Freedom (Regnery) on October 16, 2019 from 12:00 PM to 1:30 PM at the Hayek Auditorium, Cato Institute in Washington, D.C. Jeremy Rabkin, Professor of Law, George Mason University and author of Law without Nations (Princeton University Press, 2007) will comment.

“Since the collapse of the Soviet Union, ‘left’ and ‘right’ have been used routinely to describe conflicting political ideologies, notwithstanding their notorious ambiguity and—a fact too often forgotten—a shared utopian root. The dream of a perfect world has inspired each generation; that hope is universal. The vision of a demigod-superman who destroys all evil, thereby inaugurating a utopia of perfection and bliss, is at least as old as the book of Daniel in the Hebrew Bible. But behind that apocalyptic vision lies a fatal conceit, to borrow a phrase from Hayek, which the Greeks called hubris. It reemerged in some sects of early Christianity and again in medieval millenarianism, Jacobinism, Marxism, Fascism, antisemitism, modern-day Salafi Islamism, and even “liberal” collectivism. In an age of rampant skepticism, religious and quasi-religious ideologies bent on the vilification and destruction of entire communities confront and undermine a confused, guilt-ridden, materialistic, often nihilistic Western society. In this book, political philosopher Juliana Geran Pilon argues that a strong defense of freedom and pluralism, which form the basis of constitutional democracy, is necessary for survival.”

Dr. Juliana Geran Pilon, earned her PhD in philosophy at the University of Chicago. The author of several books including The Art of Peace: Engaging a Complex World and over two hundred articles on international affairs, she has taught at several colleges and universities, and managed democracy-strengthening programs. She is also program director for AHI’s popular Washington Program on National Security (WaPoNS) now in its third year, which aims to prepare promising and motivated college students for the challenges of a rapidly changing global environment by offering them an opportunity to engage with some of the best thinkers on and practitioners in the field of national security.