AHI’s Paquette Presents in New Orleans on Jefferson and Slavery 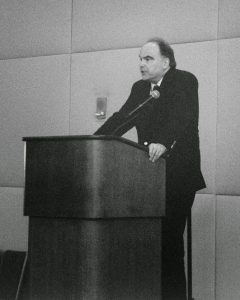 The Friends of the Cabildo, a non-profit group that “provides financial and volunteer support for the Louisiana State Museum, its projects and its properties,” held its Third Annual Symposium on December 9-10 at the Old U.S. Mint, 400 Esplanade St, in New Orleans.  The theme of this year’s symposium was “Outside the Law: Piracy & the Illicit Slave Trade in the Gulf South.  Robert Paquette, Executive Director of the Alexander Hamilton Institute for the Study of Western Civilization (AHI), one of five scholars invited to present papers at the symposium, spoke on “ ‘That Inhuman Traffic’: Jefferson, Louisiana, and the Ending of the Slave Trade to and Slavery in the United States.”

Paquette began his talk by noting that the stature of Thomas Jefferson in the academy has declined more precipitously during the last half century than that of any of the other founders.  Aside from his alleged affair with the slave Sally Hemings and his racialist views on the colonization of emancipated slaves, Jefferson, according to recent critics, did little or nothing, inside or outside of government, to undermine the institution of slavery.  Paquette challenged this view by explaining how Jefferson’s understanding of the problem of ending slavery changed dramatically during the last decade or so of the eighteenth century, from a policy of containment at the time of the Northwest Ordinance (1787) to one of diffusionism before the Louisiana Purchase (1803).  Although a number of scholars have mocked Jefferson’s vision of expanding slavery in order to weaken it, Paquette argued that the idea not only had merit, but was working during the antebellum period, although much more slowly than Jefferson would have hoped.

Diffusion appeared in Jefferson’s thinking at the time of the debate about whether slavery should exist in the Mississippi Territory.  For diffusionism  to work, however, an indispensable prerequisite was the federal closing of the Atlantic slave trade, which closing happened during Jefferson’s presidency and with his ardent encouragement.  By closing the foreign slave trade while keeping open the domestic traffic, Jefferson reasoned, southwestern territory would siphon off slaves from east to west.  As the plantation system spread from the southern Atlantic seaboard to the Deep South, markets would reallocate labor from areas of lower to higher productivity, from exhausted soil to more productive virgin soil.  In this way dangerous concentrations of slaves in existing states—a growing concern in light of the Haitian Revolution— might be broken up and dispersed through an extended South in smaller, less threatening proportions relative to the white population.   Whites, in turn, would be growing by both external migration and natural reproduction, presumably Jefferson must have thought at a higher rate than that of the slaves.  Thus demographic change might slowly foster more propitious political circumstances in which to effect gradual emancipation, most likely by freeing those born into slavery after a certain date, as, say, New York’s legislature had done in 1799.

Paquette noted that in one recent conspicuous attack by a prominent historian on Jefferson’s idea of diffusionism as a “scam,” the critic, later on in the book, had actually acknowledged, albeit unwittingly, diffusionism at work.  After correctly noting the increasing concentration in the Southwest during the antebellum period of slaves owned by slaveholders with fifteen or more slaves, the historian acknowledged that proslavery Southerners were growing deeply concerned that “the declining percentage of slaves and slave owners in the upper southern states would eventually lead to border-state legislatures filled with non-slaveholders, who might decide to impose emancipation.”  Paquette contended that this very scenario depicted diffusionism succeeding.  Moreover, Paquette contended, a more dramatic example of diffusionism at work unraveling slavery existed in Brazil after the British navy forcibly ended that country’s illegal trade in slaves with Africa.  As a result, a massive shifting of slave labor occurred from northeastern to southeastern Brazil as markets reallocated slaves to satisfy demand related to a boom in coffee production.

In the second half of his presentation, Paquette shifted from the macro view to the micro view by examining attitudes about the slave trade during the territorial period of Louisiana’s history.  Although smugglers like the Laffite brothers plied Bayou Lafourche up and down as a back-door approach to New Orleans, one that circumvented government watch-posts located directly upriver from the Mississippi’s mouth, during the territorial period (1803-1812), Paquette contended, the role of the Lafitte brothers in bringing in contraband slaves of any kind is exaggerated and appears to have been marginal in the larger scheme of things.  Louisiana’s prospering sugar and cotton industries sought slave labor during the territorial period, but planters had concerns about illegal imports from the Caribbean because of the successful slave revolution in Haiti.  Instead, in satisfying demand, thousands of African slaves entered New Orleans legally as a result of coastal transshipments from South Carolina, which had reopened the Atlantic slave trade before the federal act of 1807 went into effect, and as a result of American-born slaves being funneled internally into New Orleans from Atlantic seaboard states like Virginia and Maryland.  In 1811, the largest slave insurrection in the history of the United States erupted in the Territory of Orleans, one year before Louisiana’s statehood.  A number of authors have pointed the finger of blame on the Laffite brothers for smuggling slaves from the war-torn Caribbean into the sugar-planting zone where the outbreak occurred.  Paquette, in his own extensive research on the history of slave rebellion, concluded that not a shred of hard evidence exists to link the activities of the Laffite brothers to the 1811 insurrection.