The nation’s capital was once again host to a remarkable group of college students from throughout the United States, participants in the Alexander Hamilton Institute for the Study of Western Civilization’s (AHI) increasingly well-known Washington Program on National Security (WAPONS). The program, now in its second year, was made possible by a generous grant from the Lynde and Harry Bradley Foundation.

To view photos of the WAPONS program, please click here >>

Taking place on the eve of Independence Day, from June 19 to July 1, eighteen young people, who had traveled from all corners of the country, from New York and Pennsylvania to California, Florida, Texas, and South Carolina, arrived at American University’s elegant new dorm on East Campus. The AHI’s partner at American University (AU), the Political Theory Institute (PTI), which was designated as an Oasis of Excellence by the American Council of Trustees and Alumni, facilitated use of a classroom. ACTA, in turn, was instrumental in publicizing the program, and its president, Dr. Michael Poliakoff, engaged with the students on several occasions, explaining to them the mission of ACTA.

Though the largest student contingent, unsurprisingly, was from Hamilton College, others hailed from Christopher Newport University, Texas Tech University, Colgate University, Skidmore College, the University of Rochester, the College of Charleston, Williams College, Liberty University, and Mercyhurst University. Their majors ranged from law, history, and political science to physics, economics, and languages. What united them was an enthusiastic devotion to learning, and impatience with both colleagues and professors who undermine the pursuit of a liberal education through undue politicization and intolerance. In a spirited conversation led by PTI’s Associate Director Tom Merrill, the students expressed concern at encroachments upon free speech and intellectual pluralism.

The program’s inaugural session took place in the beautifully renovated Revolution-era building that houses Hillsdale College’s Washington Campus, the Kirby Center for Constitutional Studies and Citizenship. It started with an overview of the strategic challenges for America, based on WAPONS Director – and AHI Senior Fellow – Dr. Juliana Geran Pilon’s new book, The Art of Peace: Engaging a Complex World, which served as the textbook for the program. The readings for the program were extensive and at times difficult, but the students had mastered them – as fully attested by the informed questions and comments.

The first expert speaker, Kirby Center Director Dr. Matt Spalding, discussed the Founding Fathers’ view of the nation’s place in the world. In the same vein, later in the afternoon, at the Cato Institute, Dr. Roger Pilon elaborated upon the principles behind the Declaration of Independence as the guiding spirit of America’s Constitution: protecting individual rights and preserving American sovereignty. Across the street from Cato, Alexander Skouras described the Atlas Network’s successful efforts to spread this ethos by establishing free-market institutes throughout the world.

The following day, the group visited the Heritage Foundation, where David Inserra spoke about cybersecurity and encryption and Dr. Lee Edwards related how the Cold War continues to be relevant today. He also recounted how he created the Victims of Communism (VOC) Foundation, whose headquarters, and the VoC Memorial – which is a replica of Tiananmen Square’s Goddess of Democracy, they would visit a few days later. Dr. Edwards was delighted by the meeting: “I was most impressed by the questions of these students. There is hope for the future with such future leaders.”  Cybersecurity came up in many of the sessions throughout the program, but the most extensive discussion was provided by Dr. Steve Bryen, former Pentagon official who created and managed the office of technology control under President Reagan.

The schedule for the two weeks that followed was extremely intense, as the students met with a large number of distinguished experts.  It included meetings at the National Endowment for Democracy, where Rodger Potocki and colleagues described their work supporting civil society throughout the world. Other experts who also spoke to them about development assistance were American University professors Lou Goodman and Hrach Gregorian.  The topic was also discussed, albeit from a different angle, at the IMF, where Piotr Trabinski offered some interesting insights about Poland.

Students also had discussions with Hudson Institute Scholars Seth Cropsey, John Fonte, and Eric Brown: Dr. Fonte explained transnationalism and sovereignty, Eric Brown summarized his research on the spread of Islamism throughout North Africa and the Middle East, while Dr. Cropsey focused on maritime strategy and deftly answered questions on virtually every aspect of foreign policy. 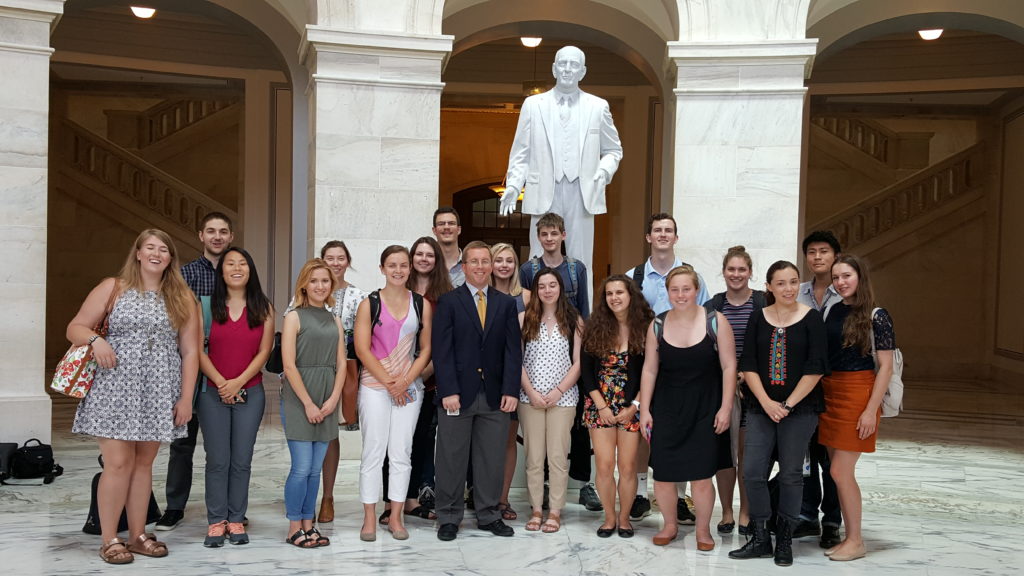 Another think tank that hosted them was the American Foreign Policy Council, where Ilan Berman brilliantly outlined the challenges in Syria, and Eric Hannis – who happens to be an AHI Senior Fellow – told them about his work on Capitol Hill, as lobbyist for Raytheon, and member of the Army Reserve. The students also took part in a book forum at the Hoover Institution, and watched a debate on nuclear weapon modernization at the Center for Strategic and International Studies, where WAPONS student Quintin Pope, asked an excellent question that none of the panelists managed to answer.

The participants especially enjoyed their visit to the Voice of America, where Dr. Rick Barnes showed them a live radio broadcast to Nigeria and another to North Korea, regaling them as well with a detailed history of post-World War II public diplomacy.  It dovetailed perfectly with a presentation by Omran Salman about Al Hurra, the official U.S. television broadcast in Arabic, as well as a trip to the State Department, where Todd Leventhal outlined the mission of the Global Engagement Center, with emphasis on countering disinformation – his principal expertise. Next door to State, Ambassador Steve Steiner hosted the students at the U.S. Institute of Peace, established thirty years ago to promote conflict resolution.

To many who have never experienced anything like it, war is an abstraction. So the students’ visit to the Holocaust Museum, hosted by Dr. Radu Ioanid, who helped select the archival materials displayed in the exhibit, would serve to recall that incomprehensible horror can take place anywhere, even in the heart of civilized Europe. And at the offices of the Committee on Human Rights in North Korea, Dr. Greg Scarlatoiu offered detailed examples of horrific human rights violations. That murderous regime, of course, is also a global threat that could destroy civilization as we know it.

Countering war and terrorism was a central theme of the program. On a visit to the Transportation Security Administration, intelligence specialists described threats to air, rail, and road travel. A conversation with COL Michael R. Eastman addressed challenges to military preparedness; and COL David Maxwell, explained the origin and significance of special forces.  Former Defense Intelligence Agency official Dr. Jack Dziak explained how the Soviet Union’s mafia tactics explain Russia’s current approach to undermine world order; his revelations had students mesmerized. And Hedieh Mirahmadi described her pioneering work on countering radicalization in the United States, carefully tested and thoroughly researched, which led to her being asked by the FBI to set up the effort for the United States as a whole.

Finally, the students visited Capitol Hill – both House and Senate.  Congressman Trent Franks surprised them by spending more than half an hour with the group, sharing with them what mattered most to him as a representative of the American people.  As he pointed to the wall in front of him in his office, where the first sentence of the Declaration was penned in large letters, he said: “This is what I keep in mind every single day that I am privileged to be here.”

The sentiment was echoed by Victoria Blancke of Charleston College, who recounted her feelings on Independence Day, which took place three days after the program’s end: “Celebrating the founding of our nation meant more to me this year than ever before after spending time in DC and meeting the men and women working so hard to keep us safe. This program has been very impactful, and I cannot thank you enough for the amazing experience.”  Her thanks were meant for the Bradley Foundation, the AHI, her colleagues, and all the remarkable experts who contributed to a very special program.