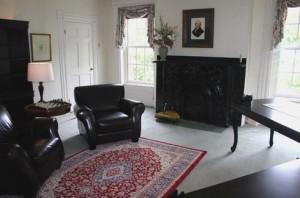 James Piereson, Senior Fellow at the Manhattan Institute and President of the William E. Simon Foundation will be honored on September 19 by the Alexander Hamilton Institute during the dinner that precedes its annual David Aldrich Nelson Lecture in Constitutional Jurisprudence.  During the summer, the AHI renovated a second-floor room in its headquarters into office space.  The room will be dedicated to Dr. Piereson.  Professor Caleb Nelson, Emerson G. Spies Distinguished Professor of Law, will follow the award ceremony with a lecture, “The Constitution and the Benthamite Interpretation of the Common Law, at the Hamilton College Chapel at 7:30 PM.

“For those interested in the reform of higher education, Jim Piereson speaks as a mellifluous voice of wisdom,” said AHI Charter Fellow  Robert Paquette.  “As executive director and trustee of the John M. Olin Foundation from 1985 to 2005, he contributed to the production of now seminal scholarship in law, economics, and political science.  To me, his writings in such journals as Commentary, The New Criterion, and the National Interest on the degradation of higher education recalls Edmund Burke’s prescience about the direction of the French Revolution.  When the AHI was like a fawn trying to hoist up to take a few steps, Jim Piereson arrived to extend a hand.  We at the AHI are deeply grateful for his support. The bookshelves in the James Piereson Room will be stocked, appropriately enough, with volumes from the Library of Liberty. We honor a scholar, a cultural warrior, and a man of honor.”