On March 30-April 1, The Alexander Hamilton Institute for the Study of Western Civilization (AHI) and Colgate University’s Center for Freedom and Western Civilization co-sponsored at Colgate University the Annual Undergraduate Conference on the American Polity.  A gifted group of undergraduates from a variety of colleges and universities presented papers on themes that ranged widely in time and in disciplinary focus.  All the papers demonstrated the high quality of student scholarship that has become a tradition at the annual conference, founded to give gifted students an opportunity to present their research on topics pertaining to the American polity to an audience of peers and scholars in the field. Click here for a photo gallery from the event. 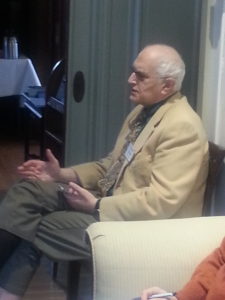 A prominent feature of the Undergraduate Conference is the opportunity for undergraduates to learn from and interact with a noted scholar. This year, Michael Zuckert, Nancy R. Dreux Professor of Political Science at Notre Dame University, an expert on political theory and Constitutional studies, was invited to keynote the conference and lead a group discussion at the end.  On opening night, he presented on “Abraham Lincoln and Democratic Statesmanship.”  On Saturday, April 1, Dr. Zuckert engaged students on every panel with probing questions that followed the presentations and the commentary of another professor on the panel. During the evening dinner, he led a lively discussion on two assigned readings: Lincoln’s Second Inaugural Address (1865) and the lyrics of the Battle Hymn of the Republic (1861).

On Saturday morning, AHI resident fellow Dr. David Frisk commented on papers by AHI undergraduate fellow Elizabeth Barry; Liberty University student Austin Felix Croom; and Skidmore College student Dylan Quinn. Barry’s paper, “Changing Notions of Republic: The Rise of the Anti-Masonic Movement in Early Nineteenth Century America,” was sparked by a visit to her grandmother’s attic and finding evidence that her great-grandfather had been a member of the Freemasons, a fraternal organization, transatlantic in scope, that had originated as a guild of stone masons at the end of the fourteenth century. This secretive organization boasted within its ranks many members of America’s founding generation. During the Jacksonian Period, freemasonry became a potent political issue, especially in the most democratic precincts of Upstate New York. Barry’s paper touched on the unsolved Morgan Affair in 1826 and on campaigns against the Masons by Protestant churches at the time of the Second Great Awakening.  She linked the rejection of Masonic hierarchy with Arminianism and the advent of Jacksonian democracy, even though Jackson himself was a Freemason. 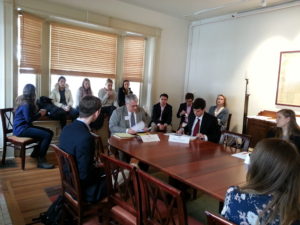 North Carolinian Austin Croom discussed property, equality, and the contours of frontier history in early eighteenth-century North Carolina. As North Carolina was settled in the early eighteenth century from Virginia and by Quakers, the area became more egalitarian and decentralized, often chafing under the heavy-handed rule of Britain’s Anglican governors.  Croom traced preconditions of the American Revolution in North Carolina to the causes of the outbreak of the Tuscarora War (1711-1715). The third panelist, Dylan Quinn, explored the nuanced Lockean position of James Otis, an understudied member of the founding fathers.

The second session featured Erez Binyamin of the Rochester Institute of Technology (RIT) presenting on “The Gorgias and the Battle between Philosophy and Rhetoric”; William Ardery, Hamilton College, on “Abraham Lincoln’s Rhetoric of Qualification”; and Anna Pluff, Colgate University, on “Natural Morality and Justice: The Case against Conventionalism in Thomas Jefferson’s Letters.” Joseph Fornieri, AHI Senior Fellow and Professor of Political Science at RIT, served as commentator. Plato’s dialogue, Gorgias, presents questions about Athenian democracy and the role of rhetoric, said Binyamin. The notion of a “just rhetoric,” introduced in the Gorgias, would be more explicitly promoted through philosopher-kings in the Republic, he argued. Pluff reviewed Thomas Jefferson’s letters to explore the influence of such thinkers as Hobbes, Locke, and Antoine Destutt de Tracy. Jefferson demonstrated his “faith in humanity and democracy,” she maintained, by favoring the Lockean notion of morality as universal and acquired through reason over the Hobbesian idea of morality as an outcome of convention.  Ardery’s investigation of four major Lincoln speeches, beginning with the Springfield Young Men’s Lyceum Address in 1838 and ending with the Second Inaugural Address in 1865, led him to conclude that Lincoln’s increasing use of the “rhetoric of qualification” was essential to his maturation as a political leader and unifier. The use of rhetoric simultaneously critical and inclusive, Ardery argued, helped Lincoln achieve both his pragmatic aims and present a compelling moral vision.

The last session of the afternoon focused on current topics. Clark Perkins, a Colgate University undergraduate, in training to become a Marine Corps officer, offered his view of the dangers that have arisen from foreign policy arrogance in the Middle East.  His paper, “Reformulating the American Policy Approach to the Islamic State: Long-term Considerations, Counterinsurgency Lessons, and Establishing a Counternarrative in Syria,” although offering no easy solutions, emphasized the need to understand the historical complexity of the Middle-Eastern societies that have given rise to upheaval and terrorism. Samantha Rosensweig, also a student at Colgate, argued for the feasibility of Sharia law coexisting with and adapting to American law as demonstrated by legal cases that have been handled by appellate courts.  Abbie Burnett, from Texas Tech University, argued for the constitutionality of gay marriage in her presentation, “Love Is Love Is Love Is Love: Why the Supreme Court’s Ruling on Gay Marriage Is Constitutional.” Quoting actor Lin-Manual Miranda in her title, she outlined many of the arguments made by the Supreme Court justices for gay marriage. Dr. Rob L’Arrivee, Visiting Assistant Professor of Political Science at Colgate University, who teaches courses on the politics of the Middle East, was the commentator. 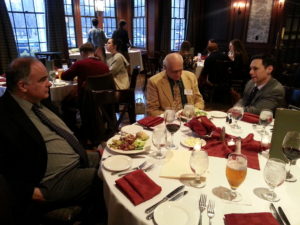 AHI’s Paquette with Michael Zuckert at the Colgate Inn

After a full day of stimulating questions, discussion, and debate, the group returned to the historic Colgate Inn for dinner and then a directed discussion with Professor Zuckert on the two assigned readings.  While at least a couple of the participating students are planning to attend graduate programs in history or political science, the conference drew from a variety of subject areas and attracted students at various stages of their college careers. Erez Binyamin, a computer engineering student at the Rochester Institute of Technology, wrote to Dr. Frisk, stating, “I’m writing to you now to thank you and the Hamilton [Institute] for giving me the opportunity to attend and speak at this terrific event, despite the fact that I am an engineering student from a non-Liberal arts inclined institution. I hope that you enjoyed my speech, and that you continue to reach out to young people who might not regularly receive opportunities to express themselves through writing and oratory.”

For his part, Dr. Frisk expressed his appreciation for students like Binyamin who go outside their majors and tackle such subjects; he agreed that these conferences should continue to include students who might not regularly receive opportunities to write and to speak publicly.  Frisk, who leads AHI-sponsored student reading groups and regularly serves as a commentator at student conferences, was quite impressed overall with this year’s presentations. “Once again,” he stated, “the Undergraduate Conference was inspiring. Both the students who made presentations and those in the audience were so engaged with the topics, as was our distinguished guest Professor Zuckert. The discussions of Lincoln and ‘The Battle Hymn of the Republic’ on the two evenings, following Zuckert’s excellent lecture, were outstanding. In addition, the great range of topics in political science and political philosophy represented by the student papers was inevitably mind-broadening for all.”

Dr. Beth L’Arrivee, Political Science instructor in the core program at Colgate, was the main organizer— helped by her husband Rob L’Arrivee— of this year’s conference. Beth L’Arrivee, who has also been an AHI visiting fellow and leader of student reading groups in Plato and Thucydides, said she accepted the assignment with “enthusiasm.” When asked to recommend the main speaker, she thought of her and her husband’s former professor from the graduate program at Notre Dame, Professor Zuckert. Familiar with his ability to engage with students, and knowing his “unique take on Lincoln as a statesman,” they invited him to be this year’s featured speaker. Although she had also worked for Zuckert at Notre Dame’s Tocqueville Program and helped organize conferences there, this was Dr. L’Arrivee’s first undergraduate conference and she was quite impressed. “The undergraduate papers were excellent and even beyond excellent,” she stated.  Professor Zuckert commented that the conference should give hope to those who might be dismayed by the decline in the liberal arts. He said it was very “heartening” to see such a dedication to promoting the humanities. 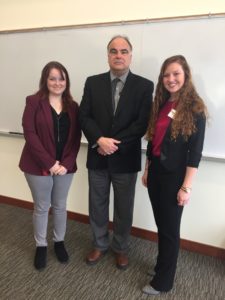 In his concluding remarks, AHI Executive Director Robert Paquette described the pride he felt in the quality of papers and presentations, some of which he thought could be publishable.  “In listening to not only the presentations of the young people at this conference,” but their conversations with me and others,” he noted, “one cannot but warm from a ray of hope that a recrudescence of higher learning in the best traditions of the liberal arts can occur.”

Perhaps undergraduate Austin Croom of Liberty University said it best when he summed up the results of the conference this way:  “I wanted to take a moment to thank you for all you did to make my experience at Colgate one I’ll long remember. I thoroughly enjoyed every aspect of the weekend, and was very impressed with the AHI’s commitment to its principles; defending freedom and pursuing the truth were shown to be much more than talking points in my first exposure to the organization. I hope to be a part of the AHI’s great work in the future.”

The 2017 Undergraduate Conference was made possible by a grant from the Charles Koch Foundation.