Antique Chairs Donated to the AHI

Previous Next
Antique Chairs Donated to the AHI

The Alexander Hamilton Institute for the Study of Western Civilization (AHI) resides in a historic Federal-style mansion, completed in 1832 by Othniel Williams (1787-1832), a lawyer and graduate of Yale University. On September 11, AHI Charter Fellow Robert Paquette, received a phone call from Louisville, Kentucky. The caller knew of the history of the building, and in the mid-twentieth century, his family had come into possession of two ornately carved antique chairs that had once resided in the house from about 1850 until before World War II.  In 1943, the grandparents of the caller’s wife’s, both from upstate New York, purchased the antique chairs. 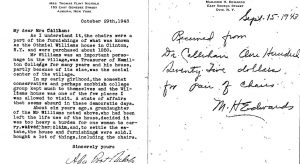 In 1900, Alice Gordon Root married Thomas Flint Nichols, Assistant Professor of Mathematics at Hamilton College.  In a letter dated October 29, 1945 from Auburn, New York, Mrs. Nichols, formerly of Clinton, describes the provenance of the chairs:  “As I understand it, the chairs were a part of the furnishings of what was known as the Othniel Williams house in Clinton, N. Y. and were purchased about 1850.  Mr. Williams was an important personage in the village

[of Clinton], was Treasurer of Hamilton College for many years and his house, partly because of its size, was the social center of the village.”  A granddaughter of Othniel Williams sold the chairs to the Nichols family in the late 1930s as part of the settlement of the estate.
Trending
AHI’s Peter Coclanis on the Cultural Pessimism of the 1619 Project

The chairs arrived at the AHI on November 10. When properly reconditioned, they will sit proudly in the Eugene D. Genovese and Elizabeth Fox-Genovese Reading Room. 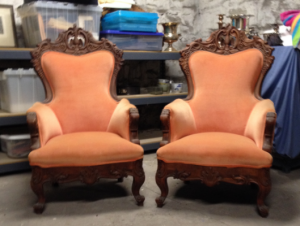 Antique Chairs Donated to the AHI 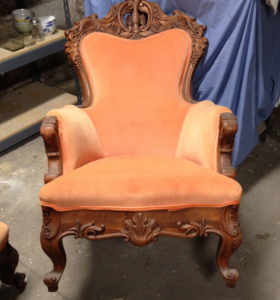 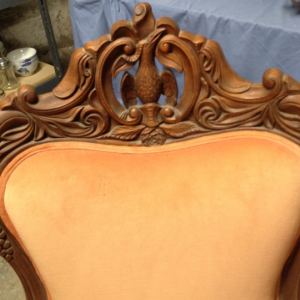