Students and other invited guests at Hamilton College this week watched “Best of Enemies,” a fascinating documentary about a legendary media event—the televised feud in 1968 between the American conservative movement’s great intellectual publicist, William F. Buckley Jr., and the outspoken left-wing novelist/essayist Gore Vidal. The highly acclaimed 2015 film, full of clips featuring people with special knowledge of the combatants as well as segments illustrating their deeply personal sparring, was shown for the benefit of students in the popular “Conservative Thought in the United States” class taught by Hamilton history professor Robert Paquette, a Charter Fellow of the Alexander Hamilton Institute for the Study of Western Civilization (AHI). 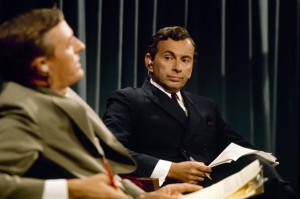 After the showing, historian Maurice Isserman and political scientist Philip Klinkner, both of the college, and David Frisk, a resident fellow of the AHI with a doctorate in political science, shared observations on “Best of Enemies.” The panelists at the April 4 event in Bradford Auditorium commented on the political and media contexts of the late 1960s as well as the two personalities, also weighing the significance of the Buckley-Vidal confrontation in light of later political and cultural developments.

Professor Isserman is co-author of America Divided: The Civil War of the 1960s and the author of several books about the modern American Left. Professor Klinkner is an expert on parties and elections, author of The Losing Parties: Out-Party National Committees, 1956-1993, and co-author of The Unsteady March: The Rise and Decline of Racial Equality in America. Dr. Frisk is the author of a biography of a major associate of Buckley’s: If Not Us, Who? William Rusher, National Review, and the Conservative Movement. A stimulating question/comment period, with wide audience participation, followed the panel.

“The best-known sound bite from the Buckley-Vidal interchanges during their paired, intentionally confrontational election-year commentary for ABC News,” Frisk notes, “began with Vidal’s baseless accusation that Buckley was a ‘sort of pro-Nazi or crypto-Nazi,’ and his more justified contention that Buckley had, at that moment, exaggerated his World War II service record. It was followed by Buckley’s offensive response: ‘ … you queer—stop calling me a crypto-Nazi, or I’ll sock you in your goddamned face and you’ll stay plastered.’ But the film shows that their mutual insults in these nightly faceoffs during the Republican and Democratic conventions covered a much wider, more interesting range. They often illuminated, at least briefly, what was at stake in that memorably polarized, indeed violent election year. The political and ‘values’ gap between Buckley and Vidal was not just vehemently expressed, but also substantively enormous. It was akin to that between zealous conservatives and zealous ‘progressives’ today. It was voiced in exceptionally literate, clever, rapid-fire language—however cruel at points—that is perhaps best appreciated in our era of duller, less sophisticated public faceoffs. This made it especially fun to watch and interesting to analyze. Most important, though, ‘Best of Enemies’ gave the audience much material for reflection on the nature and the reasonable bounds of political debate.”

An article about the movie event “Political Coverage: Fact of Farce” can also be found on the Hamilton College website.