The Alexander Hamilton Institute for the Study of Western Civilization (AHI) is pleased to announce the addition of Alexander T. Riley to the ranks of its senior fellows.  Riley is Professor of Sociology at Bucknell University in Lewisburg, Pennsylvania. 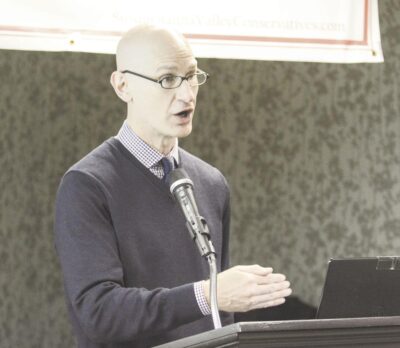 In announcing the appointment, AHI President Robert Paquette praised Professor Riley for the quality of his scholarship and his commitment to educational reform. “Over the last few years, I have come to know Alexander Riley as a kindred spirit, a courageous educator who has tried to defend against the barbarians at Bucknell the best traditions of liberal arts education.  I also had the opportunity to evaluate in manuscript one of his books for a publisher.  I was impressed by both his erudition and analytical skill. Professor Riley has an exemplary record in nurturing undergraduates at Bucknell, holding them to high standards and insisting that they read great books.  Many of his students will benefit from AHI programming. We are delighted to have him on board as we address together the growing darkness in higher education.”

Professor Riley earned his Ph. D. from the University of California, San Diego, where he wrote a thesis that examined secularism and religion in the work and lives of the founders of French sociology.  As a graduate student, he was the recipient of a Chateaubriand Research Fellowship in Social Sciences in 1996-97, awarded by the French Embassy to the United States, Mission Scientifique et Technologique.  In 2013-14, he received a Fulbright Scholar Award from the Council for International Exchange of Scholars and the Franco-American Commission to do archival research in France related to the biographies and work of a group of 20th century French intellectuals including Michel Leiris and Roger Caillois.

At Bucknell, Professor Riley teaches a wide range of courses, including sociological theory; evolutionary theory in the social sciences; religion; the sociology of knowledge, science, and intellectuals; the mind and self in social and evolutionary context; the sociology of the arts and creativity; death in human culture and society; the 1960s; the history of conservative thought; and American society and culture. His books include Godless Intellectuals?:  The Intellectual Pursuit of the Sacred Reinvented  (Berghahn, 2010) and The Social Thought of Émile Durkheim (SAGE, 2014), both on the history and interpretation of French social thought; Impure Play:  Sacredness, Transgression, and the Tragic in Popular Culture (Lexington, 2010), on transgression in American popular culture; Angel Patriots: The Crash of United Flight 93 and the Myth of America (New York University Press, 2015), on the collective memory of 9/11; and Toward a Biosocial Science: Evolutionary Theory, Human Nature, and Social Life (Routledge, 2021), on evolutionary theory in the social sciences.

As a graduate student, Riley co-edited with the late Philippe Besnard, Un ethnologue dans les tranchées: août 1914-avril 1915: lettres de Robert Hertz à sa femme Alice (Éditions CNRS,  2002), a selection of letters written from the front during WWI by the French philosopher/sociologist Robert Hertz, who was killed in action in April 1915.  He has translated works in the French social sciences, Saints, Heroes, Myths, and Rites:  Classical Durkheimian Studies of Religion and Society (Paradigm, 2009) and co-edited with W. Watts Miller and the late W.S.F. Pickering Durkheim, the Durkheimians and Art (Berghahn, 2013), a collection of essays on art and French social science.  Recently, he co-edited with Alf Siewers The Totalitarian Legacy of the Bolshevik Revolution  (Lexington, 2019), a book based on a symposium on the legacy of the Bolshevik Revolution, and edited Reflecting on the 1960s at 50: A Concise Account of How the 1960s Changed America, for Better and for Worse (Routledge, 2020), a book based on a series of public interviews he did with scholars on the consequences of the 1960s in America.