The Alexander Hamilton Institute for the Study of Western Civilization (AHI) is pleased to announce that Colonel David Maxwell, Associate Director of the Center for Security Studies and the Security Studies Program, Georgetown University, will deliver the Fifth Annual General Josiah Bunting III Veterans Day Lecture.  The event will take place on Thursday, November 9, at 7 p.m. in the Kennedy Auditorium, Taylor Science Center, at Hamilton College. Colonel Maxwell, a leading authority on North Korea, will discuss the “Security Situation on the Korean Peninsula and the Way Ahead.” The event is free of cost and open to the public. 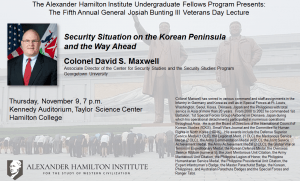 Colonel Maxwell is a 30-year veteran of the U.S. Army retiring as a Special Forces Colonel with his final assignment serving on the military faculty teaching national security at the National War College. He spent the majority of his military service overseas with over 20 years in Asia, primarily in Korea, Japan, and the Philippines.  He led organizations from the A-Team to the Joint Special Operations Task Force level. He has authored a number of articles and his blog can be found here.

The lecture honors General Josiah Bunting III, a charter member of the AHI’s board of directors.  General Bunting was graduated from the Virginia Military Institute in 1963. He subsequently studied at Oxford as a Rhodes Scholar and at Columbia University as a John Burgess Fellow. During active duty with the United States Army, he served as an infantry officer in Vietnam with the Ninth Infantry Division. During his military career, General Bunting received the Bronze Star with two Oak Leaf Clusters, Army Commendation Medal, Vietnam Honor Medal–2nd class, Presidential Unit Citation, Parachute Badge, Combat Infantry Badge, and Ranger Tab. Subsequently, he taught history at West Point and at the Naval War College. He served as President, Briarcliff College (1973-1977); President, Hampden-Sydney College (1977-1987); and Superintendent, VMI (1995-2003). General Bunting has published four novels, including The Lionheads (G. Braziller, 1972), a best-seller that was selected by Time Magazine as one of “The Ten Best Novels” of 1973.