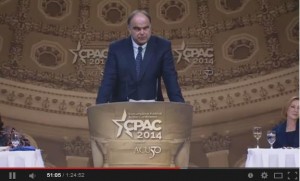 Ladies and Gentlemen, officers and friends of the Lynde and Harry Bradley Foundation, the American Conservative Union Foundation, and CPAC, I am deeply honored by the Jeane Jordan Kirkpatrick Award.  I was floored when I first heard the news.  I am humbled now but ready to demonstrate my worthiness, for I have rolled up my sleeves to undertake the daunting task ahead for all of us in this room tonight, which task is nothing less than to repair the tattered fabric of a great nation unraveling before our very eyes at the hands of the transformationalists.

I stand before you as the chief architect of the Alexander Hamilton Institute for the Study of Western Civilization, an independent scholarly center devoted, as our charter states,  to the study of freedom, democracy, and capitalism as these ideas were developed and institutionalized in the United States and within the larger tradition of Western culture.  Bits and pieces of the story of the AHI’s rise, fall, and rebirth have surfaced in the national media over the last seven years. Born in controversy as an on-campus center, the AHI relocated off-campus into a historic mansion that serves as our stately headquarters when the administration of Hamilton College, under pressure from radical faculty and their allies on the board of trustees, reneged on a signed agreement.

Think about this question:  Why Western Civilization?  You know in 2006 at separate meetings, both the president of Hamilton College and its dean of the faculty stunned me by asking me that very question, for they wanted me to excise the words “for the study of Western civilization” from the center that I had proposed to name after Alexander Hamilton, the College’s namesake.  I responded to both dean and president in words that would echo language that became part of the AHI’s charter: First, the idea of personal freedom had no equivalent in the vocabularies of non-Western civilizations until imported from the West. Second, democracy first flourished in the city-states of ancient Greece. Third, while the propensity to truck, barter, and exchange seems to have been inscribed in humanity’s genes, a full-blown capitalist system originated England. Does not modernity, I said, imply to a great extent the momentous extension and elaboration of these ideas around the world?

Jeane Jordan Kirkpatrick caught the attention of Ronald Reagan in 1979 by publishing in Commentary magazine an article entitled “Dictatorships & Double Standards.”  The title fits the practice of higher education on many college and universities today, where there is a scandalous lack of intellectual diversity.  Think of this:  At many of the most prestigious liberal arts colleges in the United States, departments of English no longer require of its majors the reading of Shakespeare; departments of history mandate that its majors take multiple courses in non-Western history but have either no requirement or a token requirement for American history. Faculty, administrators, and trustees have openly betrayed the finest traditions of liberal arts education by passing off the swindle known as the open curriculum, which, in truth, means the no curriculum, as something somehow worthy of a $60,000 per year price tag.

I have lived in the belly of the beast of higher education for 33 years as a practicing historian. The animating principles of that great experiment in Republican government, I tell my students, centered on the defense of limited government, voluntary exchange, private property, and civil freedom.  Does anyone in the audience tonight believe that more than a tiny fraction of students graduate from college these days with a deep and abiding appreciation of the worth of these principles?  Or is it more likely that a substantial number of students graduate able to parrot one or another fashionable and distortional discourses of oppression in which we see—and here I paraphrase from any number of  listings in college catalogues– the intersections of class, race, gender, and sexuality.

For the Doubting Thomases,   I say perform this simple experiment.  Go to the home page of the website of any elite college or university in the United States.   Activate the search engine by plugging in such words as social justice, sustainability, diversity, multiculturalism, sexism, racism, Marx, activist, and identities. Total the references. Now perform a similar search for, say, conservative, entrepreneur, Western civilization, Shakespeare, Judaic, Aristotle, and Christian. Get the point.

Republican government, as Jeane Kirpatrick understood, requires for its very survival a certain kind of civic culture that “make

[s] heavy demands” on the citizenry “to do what is necessary” for the defense and preservation of vital constitutional principles. That spirit draws energy from tradition.  No tradition, however worthy, grows richer or stronger by lying fallow.  Traditions are embodied givens, the rock on which we deliberate in searching for proper ends in ever changing circumstances.  Traditions must be fought for.  What is the good, the true, the just, and the noble can be lost in remarkable quickstep through political expediency, intellectual bankruptcy, and moral cowardice. Do you hear me Harry Reid?

Ladies and Gentlemen, I have two children whom I love dearly.  It appears to me ever more likely that they will inherit a world of domestic and global crises that pale next to those I have witnessed in my lifetime.  I am not alone in sensing that the United States is in a state of palpable decline with consequences for the world that no living sage can foretell.  I have committed myself in the time remaining to me to go out on my shield, to fight to the end for what is good and worthy in the Western and American traditions.  Friends and supporters of this wonderful gathering, please know how honored I am to be here, how grateful I am for this moving recognition, and, more than anything else, that I stand with you, primed, cocked, and loaded, on the line, cheek-by-jowl, ready to advance.  God bless America.