In 2020, The Alexander Hamilton Institute for the Study of Western Civilization (AHI) established the James Piereson Summer Internship.  Dr. Piereson, a prominent public intellectual, has played a vital role in helping to erect the scaffolding of what AHI’s founders hoped would be an enduring edifice. Recipients of the Piereson Internship must demonstrate both intellectual quality and high moral character.  AHI is pleased to announce that Edward Shvets of Hackettstown, New Jersey, is the recipient of this year’s award.

Mr. Shvets grew up in Brighton Beach, a community with a sizeable presence of Russian immigrants. He is the son and grandson of Russian Jews who fled the Soviet Union at the end of the 1980s.  He attended Hamilton College, majored in Russian, studied economics, political science, and history, and graduated a semester early in 2020. 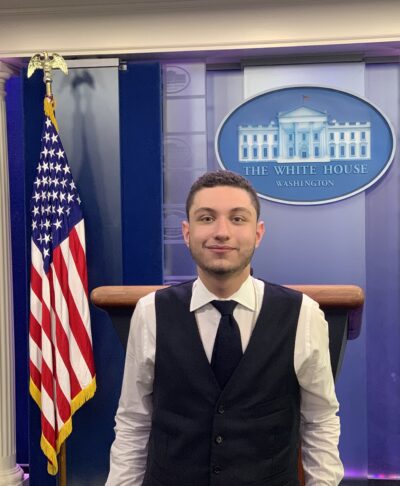 Edward Shvets in the press briefing room of the White House

“I rank AHI as a cherished and crucial energizing force in my life,” Shvets noted. “As the son of Soviet émigrés, I have had since childhood a special appreciation for the U.S. Constitution and the liberties it bestows on its citizens. After graduating as valedictorian of my high school in 2017 with a passion for community service and a deep appreciation of the works of George Orwell, notably 1984 and “Politics and the English Language,” I was determined to help defend the principles of freedom and representative government. AHI offered a much-needed haven to do so during my undergraduate years.

I first began my involvement with AHI during my freshman year when I attended a visiting scholar’s lecture on George Washington’s Farewell Address. I was captivated by the beauty of the historic Federal-style mansion that stands as AHI headquarters and the intellectual sophistication of that evening’s discussion. I participated in nearly every AHI event thereafter.

During the summer of 2018, I interned for Congresswoman Claudia Tenney’s campaign. I enjoyed not only learning about the process of getting elected but also interacting with constituents of the NY-22 district. Congresswoman Tenney was caring and inspiring; it was a memorable experience to have been part of her team.

That summer, I also assisted AHI Resident Fellow Dr. Mary Grabar with research for her best-selling book, Debunking Howard Zinn. The privilege of serving as a White House Intern the following spring nurtured a deeper knowledge and appreciation of this country’s federal government. While assisting AHI Resident Fellow Dr. David Frisk with research for his forthcoming book on the legendary political theorist Willmoore Kendall, I delved deeper into the history and philosophy of America’s founding through a directed reading of The Federalist under the instruction of AHI President Professor Paquette. In the 2019-20 academic year, as the leader of the AHI Undergraduate Fellows Program, I dedicated myself to helping advance AHI programming for undergraduates.

One of the most memorable and rewarding experiences in particular was organizing on campus the Seventh Annual General Josiah Bunting III Veterans Day lecture. Despite prohibitive weather, more than fifty people attended and listened to a compelling address by Marine Officer Corps veteran, Nick Philippi, a Hamilton alumnus. Without this AHI-sponsored event, Hamilton College would have done nothing to commemorate Veteran’s Day.

It is a great honor to continue my involvement with the AHI this summer. I extend my gratitude to AHI President Professor Paquette, an incredible man and great scholar who labors tirelessly to uphold academic excellence and freedom, and for whom I have immeasurable respect and admiration.”  With the $3000 award, Shvets will be assisting AHI Resident Fellow David Frisk in the preparation of his intellectual biography of Willmoore Kendall, one of the most brilliant political theorists ever produced in the United States and the mentor at Yale of William F. Buckley.

With AHI’s help, Mr. Shvets has landed a job with an internationally known non-profit, for which he has already begun work.   “In mentoring Edward Shvets over the last three-plus years,” observed AHI President Robert Paquette, “I have had the chance to observe him up close and personal.  He is one of the most moral young persons I have met during almost forty years teaching at Hamilton College. He has surmounted considerable adversity in life to become an exemplary student. He has enormous potential. He brings with him an impressive work ethic, old-school manners, and considerable intellectual curiosity.  He has a seriousness of purpose well beyond his years. You will not find him at any time engrossed with an iPhone taking selfies. We have chatted informally on numerous occasions. He is thoughtful and very much interested in preserving the best traditions of a country that has given his family a second life.”

With the award, AHI honors James Piereson, Senior Fellow, Manhattan Institute and trustee of the William E. Simon Foundation.  Dr. Piereson serves on numerous boards including The Pinkerton Foundation, the Thomas W. Smith Foundation, The Center for Individual Rights, the Foundation for Cultural Review, the American Spectator Foundation, Donors Trust, the William F. Buckley, Jr., Program at Yale University, and the Intercollegiate Studies Institute. He has published dozens of articles in leading journals and newspapers and is the author of Camelot and the Cultural Revolution: How the Assassination of John F. Kennedy Shattered American Liberalism (2007); The Inequality Hoax (2014); Why Redistribution Fails (2015) and Shattered Consensus: The Rise and Decline of America’s Postwar Political Order (2015). He received his Ph.D. in political science from Michigan State University in 1973.