In 2020, Harlan Calkins, a charter member of AHI’s board of directors, moved into emeritus status. At the last board meeting of that year, AHI President Robert Paquette announced the creation of a summer fellowship to honor Mr. Calkins’ many contributions to AHI.

An inductee into the Rochester Business Hall of Fame, he not only supported AHI from its inception, but helped mobilize friends and members of Rochester’s business community to back the initiative.  The fellowship is designed to support the work of a worthy undergraduate in the fields of business, economics, entrepreneurship, and law.  AHI is pleased to announce Garrett Callen of North Bethesda, Maryland, as the recipient of the inaugural award. 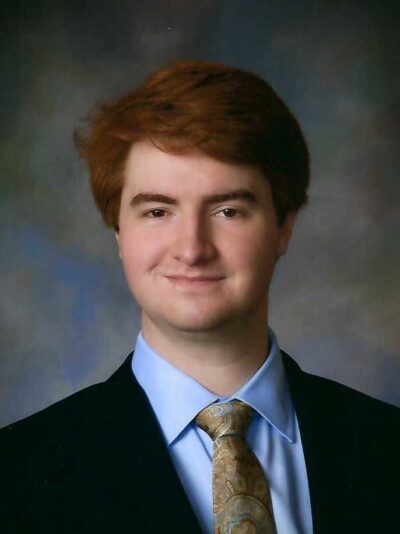 Mr. Callen graduated from Hamilton College in 2021 with a degree in Economics (honors) and Government. For each major, he composed a senior thesis: “Financial Development and the Trade Openness-Economic Growth Relationship” in economics and “The Accommodation of Religion and COVID-19 Restrictions on Religious Gatherings” in government. During the summer of 2020, he interned at the US Department of State.  He has a particular interest in Constitutional law and enjoys reading Supreme Court decisions in his spare time.

A dean’s list student, Mr. Callen attained a high score on his LSAT examination and is currently in the final stages of choosing which law school to attend.  He will use his $3000 fellowship to undertake a directed reading course under the supervision of AHI President Robert Paquette to prepare him for law school.  He will be reading three influential works on the Constitution from three differing perspectives: Forrest McDonald’s, Novus Ordo Seclorum:  The Intellectual Origins of the Constitution (1985); Akhil Amar’s America’s Constitution: A Biography (2006), and Richard Epstein’s The Classical Liberal Constitution: The Uncertain Quest for Limited Government (2017).   In addition, Paquette will be directing Mr. Callen’s reading of many of the most important essays in American legal history, beginning with Alexander Hamilton’s Federalist #78.  For each essay, Callen will compose a synopsis of 300 to 350 words, which will be intensively critiqued by Paquette.

“Although I never had the pleasure of having Mr. Callen attend one of my courses before my exiting of Hamilton College in 2018,” AHI President Paquette observed, “I became acquainted with him during events at AHI headquarters.  I liked what I saw. We chatted on numerous occasions during the Covid pandemic, and I was impressed by his own awakening to the importance of high standards and a coherent liberal arts education in preparing someone for the duties and responsibilities of life.  During the first years of AHI’s existence, Harlan Calkins delivered a memorable lecture on entrepreneurship, which underscored the importance of a traditional liberal arts education to his own success in business.  He recalled in particular the rigorous composition courses Hamilton College once mandated to his ability to read and fine tune contracts.  Given my knowledge of this fine man and of his versatile interests, I believe Mr. Callen is an excellent choice for the inaugural award.”

Mr. Calkins was graduated from Hamilton College in 1954 with a BA as a chemistry major.  He was the chairman and CEO of Rochester Midland Corporation, a leading supplier in North America of industrial cleaners and other chemical products.  He served on the boards of numerous business and philanthropic organizations, including Security Trust, Highland Hospital, the Al Sigl Foundation, and Rochester Telephone, all in Rochester, New York as well as Norstar Bank, in Buffalo, New York;  and Malden Trust, in Malden, Massachusetts.  At Hamilton College he was a member of the Delta Upsilon Fraternity and DT, Was Los, and Pentagon societies. He co-captained the soccer and baseball teams. In 1956-1957, he served in the United States Army in counter-intelligence while stationed in Japan. In 2010, Mr. Calkins was inducted into the Rochester Business Hall of Fame.