On April 23 the Alexander Hamilton Institute for the Study of Western Civilization (AHI) hosted Andrew Porwancher, Wick Cary Associate Professor, Department of Classics and Letters, University of Oklahoma.  Dr. Porwancher has an eagerly anticipated book in press The Jewish Founding Father: Alexander Hamilton’s Hidden Life (Harvard University Press, 2019).  After enjoying drinks and hors’ d’oeuvres at a reception for Dr. Porwancher, AHI undergraduate fellows and community members had a chance during dinner to converse with him on President George Washington’s Farewell Address (1796), one of the most famous and cherished documents of the founding era.  As Dr. Porwancher pointed out, Alexander Hamilton played an important role in the composition of the Address.  Indeed, for several generations, influential students of the subject thought that Hamilton, not Washington, had composed it. 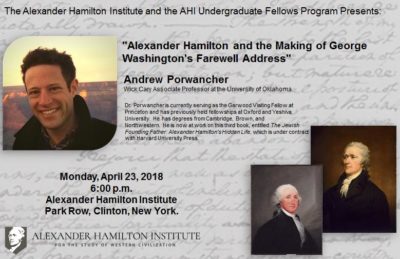 In introducing Dr. Porwancher at the Leadership Dinner, AHI Executive Director Robert Paquette referred to Michael Oakeshott, a twentieth-century British philosopher whose work has been at the center of previous AHI programming.  The purpose of the leadership dinners, said Paquette, was to have an “Oakeshottian conversation,” of the kind Oakeshott described in an acclaimed essay “The Voice of Poetry in the Conversation of Mankind” (1960).  “Conversation is not an enterprise designed to yield an extrinsic profit, a contest where a winner gets a prize, nor is it an activity of exegesis,” said Oakeshott.  “[I]t is an unrehearsed intellectual adventure. It is with conversation as with gambling, its significance lies neither in winning nor in losing, but in wagering. Properly speaking, it is impossible in the absence of a diversity of voices: in it different universes of discourse meet, acknowledge each other and enjoy an oblique relationship which neither requires nor forecasts their being assimilated to one another.” 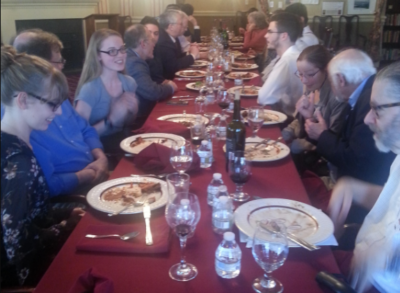 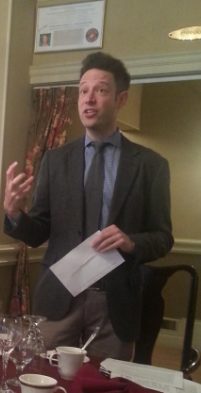 After a few brief remarks about the Address, Porwancher initiated a thoughtful open-ended, wide-ranging conversation of which Oakeshott would have approved.  Professor Porwancher, who is on sabbatical as a Senior Research Fellow at Yeshiva University for fall 2017 and as a Garwood Fellow at Princeton University this semester, drew on his forthcoming book on Alexander Hamilton by describing the circumstances that surrounded the writing of the Farewell Address. Washington, Porwancher pointed out, like many of the founding generation, were men of honor, concerned about their reputations, who served because they were called by their fellow citizens to do so, not because they saw public service as a vehicle for power or self-aggrandizement.  In fact, James Madison and others had to persuade him to serve a second term; Washington consented in order to ensure stability at a tumultuous time when many contemporaries believed the very survival of that great experiment in republican government was at stake. 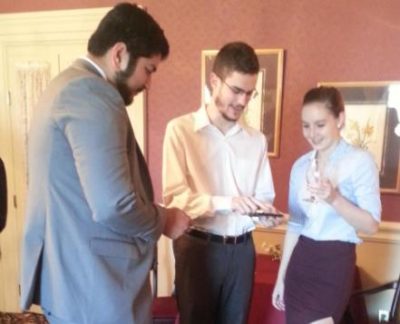 When Jefferson and Madison worked up the primary reading list for the University of Virginia in 1825, they described the Farewell Address as one of the best guides to the political principles of the founding.  A free society must avoid “overgrown military establishments.”  Popular government must avoid “the baneful effects of the spirit of party generally.”  A free society must avoid the “spirit of encroachment [which] tends to consolidate the powers of all the departments in one.”  To survive, a popular government must possess in its fundamental law “reciprocal checks in the exercise of political power, by dividing and distributing it into different depositaries, and constituting each the guardian of the public weal against invasions by the others.”  “[R]eligion and morality are indispensable supports” of “free government.” “In vain would that man claim the tribute of patriotism, who should labor to subvert these great pillars of human happiness, these firmest props of the duties of men and citizens.”  A free government, to sustain itself, must promote “institutions for the general diffusion of knowledge.” “[C]herish public credit, though use it “sparingly.”  “Observe good faith and justice towards all nations; cultivate peace and harmony with all. . . . [I]nveterate antipathies against particular nations, and passionate attachments for others, should be excluded”  “[A] passionate attachment of one nation for another [also] produces a variety of evils.”  “Against the insidious wiles of foreign influence . . .  the jealousy of a free people ought to be constantly awake.”  “The great rule of conduct” for the fledgling republic “in regard to foreign nations is in having “liberal [commercial] intercourse with all nations” but “to have with them as little political connection as possible.” 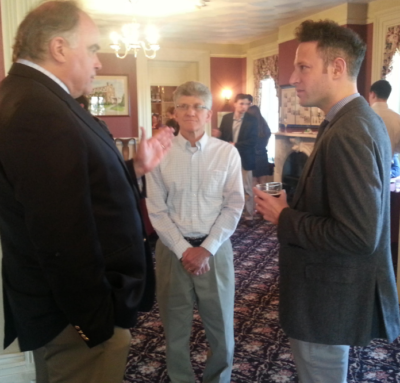 Porwancher stressed the significance of the Farewell Address as “a sacred civil text.”  Washington began it in 1795, and the first draft contained paragraphs previously written for him by James Madison.  Washington had relied on Hamilton’s writing skills in the past, and in 1796, in ill health, he turned over a draft of the Address to Hamilton for editing and polishing.  Hamilton rewrote it.  But Washington, ultimately accepted only parts of Hamilton’s reconstruction. Although the Farewell Oration was a “collaborative endeavor,” said Porwancher, core ideas belonged to Washington.  Controversy over the authorship of the Farewell Address persisted for decades.

During the dinner, focus by the attendants turned to the paragraph in which Washington asserts, “Of all the dispositions and habits which lead to political prosperity, religion and morality are indispensable supports. . . . Whatever may be conceded to the influence of refined education on minds of peculiar structure, reason and experience both forbid us to expect that national morality can prevail in exclusion of religious principle.” The significant deployment of religion in the Address would not likely have occurred, Porwancher believed, if Jefferson and Madison had written it.   In fact, Hamilton’s influence pervade the religious passages, for at the time, said Porwancher, he was recoiling at the bloody excesses of the French Revolution, its expropriation of property, destruction of churches, and executions of clergy.  “Thomas Jefferson is taken as representative of religious thought because of his statements on separation of church and state,” he added. Unfortunately, “the Jeffersonian view,” which sees these spheres as completely disassociated, “has won out.” But in reality, Porwancher contended, the “more idiosyncratic Hamiltonian Christian-Hebraic view” is the model. The Address’s insistence that religion serves civic ends gives evidence to the importance of the ancient Israelite government and the influence of Hugo Grotius, the great Dutch theorist of international law, on Hamilton. 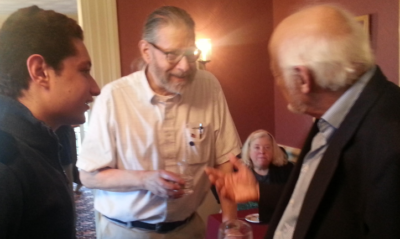 Guests chat before the leadership dinner

Dr. Porwancher congratulated AHI for bringing together such a thoughtful and enthusiastic group of people.  They included Hamilton College undergraduates and faculty, high school students, and informed citizens from the region.   “Andrew Porwancher,” said Paquette, “is a rapidly rising young historian whose forthcoming book on Alexander Hamilton’s Jewish connections will bring him considerable attention and accolades.  He sparked a lively discussion about the meaning of the founding.  Washington’s Farewell Address juxtaposed next to Thomas Jefferson First Inaugural Address suggests that Federalists and Democratic-Republicans, despite their intense partisan warfare, had much more in common than they were willing to admit.”