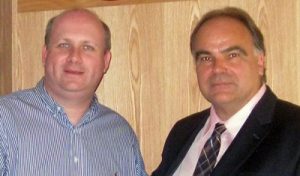 On Sunday evening, 2 October, Marc Elias, Firmwide Chair at Perkins Coie law firm in Washington D.C., spoke before a large audience on the Hamilton College campus about campaign finance and the election of 2012. Mr. Elias, a 1990 graduate of Hamilton College with a J.D. from Duke University, ranks as one of the most influential political lawyers in the United States. He has represented a variety of prominent Congressional leaders, including Chuck Shumer and John Kerry.

Mr. Elias, who is currently a Visiting Fellow at the AHI, showed how the comprehensive regime of campaign finance regulations enacted in 1974 has been eviscerated by court decisions from Buckley v. Valeo to Citizens United. From super pacs  to 501 c-4 organizations, he suggested, new forms of financial intermediation are likely to play an important role in the election. He also discussed the prospects for reform and the differential impact of greater transparency in political contributions at federal, state, and local levels.

A catered dinner at the AHI in honor of Mr. Elias  preceded his lecture. AHI Senior Fellow Ted Eismeier served as a mentor to Mr. Elias when he was an undergraduate at Hamilton.  Attendants included select Hamilton College students and faculty. During the dinner, Professor Eismeier toasted Mr. Elias and his accomplishments.  In prefacing his lecture, Mr. Elias praised the rigor of the traditional liberal arts education he had received at Hamilton College.

The AHI is also pleased to announce that Mr. Elias has consented to serve the AHI in the capacity of academic advisor.  Marc, welcome aboard!