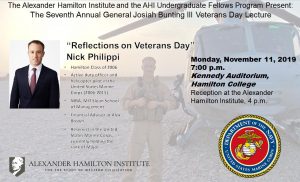 During the summer between his junior and senior years at Hamilton, Mr. Philippi attended the Platoon Leaders Course for ten weeks in Quantico, Virginia.  After graduation, he accepted a commission as a Second Lieutenant in the Marine Corps. He was assigned to a light-attack helicopter squadron whose mission was to provide close air support to Marines on the ground. Nick left active duty in 2015 to attend the Sloan School of Management at MIT where he received his MBA.  He currently works in Boston as a financial advisor for the firm Alex. Brown.

Alexander Hamilton Institute for the Study of Western Civilization (AHI) Senior Fellow Theodore Eismeier mentored Mr. Philippi at Hamilton College. “In my 35 years at Hamilton College,” Dr. Eismeier recalled, “my greatest reward was teaching students like Nick Philippi. I came to know Nick well during our time together in the Hamilton Program in Washington, D.C. He always exhibited a quiet confidence, a seriousness of purpose with a wry sense of humor. He was, like Gary Cooper and John Wayne, the strong silent type. Of such men, Peggy Noonan writes ‘I admire and have often been instructed by the strong silence of men. They’re silent not because they have nothing to say, but because they don’t have to fill up the air with words. They don’t need to be looked at to dominate. They already dominate, just by looking at themselves, but they’re serene about it.’ One of the highlights of my career was attending the ceremony commissioning Nick as an officer during commencement weekend. I remember thinking how proud Nick’s parents must be and how fortunate our nation was to have young men and women like Nick. I also remember thinking that Nick was destined for success in the military and beyond. I was right.  I would be remiss if I did not mention the most important evidence of Nick’s wisdom—having the great good sense to marry Katie Plummer, another one of my favorite students.”

AHI President Robert Paquette introduced Mr. Philippi to a sizeable crowd, which had ignored the first major snowstorm of the fall to attend the event on the Hamilton College campus. A reception and dinner at AHI with students preceded the lecture.

“Mr. Philippi delved into the many lessons he learned during his tenure in the Marine Corps to underscore the importance of service to others,” observed Edward Shvets, leader of the AHI Undergraduate Fellows Program. “Inspired by his uncle, a Marine Corps pilot, Mr. Philippi spoke movingly about the dedication to ‘perpetual service’ in his family and the ‘excellence’ of his mentors when interning at Bell Helicopter. His experience in active duty underscored the sacrifices of those on the front line as well as those left back home. We should all heed Mr. Philippi’s call to action of ‘service, in any capacity’—by serving a purpose greater than ourselves and helping others we can not only unleash our full potential but also that of all humanity.”

AHI inaugurated the annual Veterans Day lecture in 2013 to honor Lt. General Josiah Bunting III, a charter member of the AHI’s board of directors. A graduate of VMI, he received a Rhodes Scholarship and studied at Oxford University. During active duty with the United States Army, General Bunting served in the United States Army in Vietnam. He received numerous decorations, including a Bronze Star, Army Commendation Medal, and Vietnam Honor Medal. He taught history at West Point and at the Naval War College. He became President, Briarcliff College (1973-1977); President, Hampden-Sydney College (1977-1987); and Superintendent, VMI (1995-2003). In his spare time, General Bunting published four novels, one that was selected by Time Magazine as one of “The Ten Best Novels” of 1973. He has published a biography of Ulysses S. Grant, several other works of non-fiction, and is currently working on a biography of General George Marshall.