Landry Frei, a native of Bend, Oregon, spent four years of his undergraduate life actively participating in the programmatic activities of the Alexander Hamilton Institute for the Study of Western Civilization (AHI).  During his junior and senior years, he served as co-leader of the AHI’s Undergraduate Fellows program.   A versatile young man, as comfortable in an auto repair shop and duck blind as he is in a classroom, Landry now makes his home in Greensboro, North Carolina. He works there for PricewaterhouseCoopers (PwC), one of the “big four” public auditing firms. 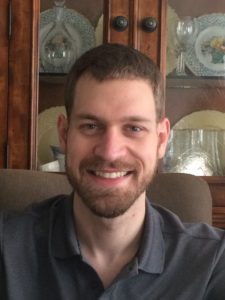 Putting on hold entrepreneurial ambitions, Landry decided to return to school and entered a graduate-level accounting program offered by the business school at the University of North Carolina at Chapel Hill. He was graduated in 2016 with a Masters of Accounting (MAC) degree and began employment with PwC in September 2016 as an associate in the tax accounting department.A 2012 graduate of Hamilton College, Landry majored in history and minored in government. A gun owner and avid defender of the Second Amendment, he was also a member of the Hamilton College Republicans and the club’s president from 2010 to 2012.  He wrote his senior thesis under the direction of AHI Charter Fellow Douglas Ambrose.  After graduation, Landry spent a summer in flight school in Arizona learning the art of flying helicopters. On his return to his hometown of Bend, Oregon, he took on a project that had become a passion:  He devoted the better part of the next two and a half years to restoring his great grandfather’s 1947 Buick. Working with a local classic car restoration specialist he rebuilt the car to a near “concours” quality restoration, which means restoration to the highest quality and as close as possible to original condition (with no alterations). The term comes from the prestigious Concourse d’Elegance car show.

During his four years at Hamilton College, Landry took full advantage of AHI’s offerings. On campus, he enrolled in classes taught by all three AHI founders: Ambrose, James Bradfield and Robert Paquette. He took Professor Paquette’s 300-level history course on the political theorist Bertrand de Jouvenel, the kind of course he says which would not likely have been offered at Hamilton College otherwise.  With Professor Ambrose as advisor, he wrote his senior history thesis on the practice of dueling in American history, with a particular focus on dueling’s relationship to the concept of gentlemanly honor in the Old South. The topic was brought to his attention in classes on the Old South with Professors Paquette and Ambrose, as well as by curiosity about the namesake of the Institute, who, famously, died in a duel with Aaron Burr. Investigating the topic of the culture of southern honor gave him a greater appreciation for the concept of manliness and why dueling persisted in the South, but not the North, after Alexander Hamilton’s death.

Landry says he was drawn to AHI because as a freshman he found himself on a campus where his views and opinions were not very welcome by most of his fellow students and even less so by faculty members and administrators. Intellectual diversity did not fall into the equation whenever “diversity” was discussed on campus. “On a liberal arts college campus such as Hamilton’s,” He observed, “it is no secret that right-of-center students and faculty aren’t exactly greeted with open arms.”  The AHI, although not catering to any particular political viewpoint, became a “safe haven,” a place where “students could discuss and debate the big ideas of the day and where anyone was free to challenge another’s viewpoints.”  It became for Landry and other undergraduate fellows, “a sort of home away from home, a place where we felt free to be ourselves and a place where we did not have to shy away from controversy or the tough subjects of the past or present.”

Landry’s participation in AHI activities is almost too long to mention. He attended the third, fourth, and fifth Carl B. Menges colloquia (2010, 2011, 2012) and assisted Professor Paquette in setting up and running the 2012 colloquium. He attended the second, third, and fourth annual David Aldrich Nelson Lecture in Constitutional Jurisprudence, with Paul Finkelman (2009) Jay Sekulow (2010), and Caleb Nelson (2011).   He took AHI Fellow Christopher Hill’s evening course “Law, Liberty, and Western History” offered by the AHI in the fall, 2011, and the companion course, “The History of the Common Law and Liberty,” in the spring, 2012. He participated in and co-lead the F.A. Hayek reading group (along with AHI alum Thomas Cheeseman) in which three of Hayek’s works Road to Serfdom, The Fatal Conceit, and Constitution of Liberty were read and discussed with professors and fellow students. The reading group traveled to the University of Rochester to meet with and have a joint discussion with the Hayek reading group organized there by libertarian economist Michael Rizzo. Landry was a member of the Publius Society and the Christopher Dawson Society and regularly attended meetings and events.

He also took advantage of the plethora of scholars and statesmen coming to the AHI to give talks on campus and at the AHI’s Leadership luncheons and other events. The steady stream of guest speakers were of “immense caliber and reputation” and included Andrew C. McCarthy, Colleen Sheehan, Congressman Richard Hanna, Richard Vedder, Nicole Gelinas, Peter Wood, Douglas Egerton, Marc Elias, Greg Mankiw, Carol Medlicott, and Leslie Marsh.

“We were not only able to hear these guests speak,” Landry pointed out, “but often engaged them, one and one, at post-event dinners and receptions.”

The AHI provided “a guiding hand” in the study of the great history of the Western tradition, and the AHI’s discussion groups, reading groups, dinners, and colloquia helped Landry examine and reflect upon these ideas on a virtually constant basis. From the AHI he obtained some of the most valued pieces of his college education and much of the development of his personal character.

“The AHI and its many participants introduced me to ideas, books, and thinkers that I would have never discovered on my own,” said Landry.  “And even more importantly, the AHI helped teach me howto view these works with a critical eye. Whereas a typical college class might peck the surface of a subject, the AHI pushes its participants to truly immerse themselves in the materials to understand the ideas and arguments at their core. AHI people pushed me to think more creatively and become a better writer and speaker.”

In fact, said Landry, “The name on my bachelor-of-arts degree that hangs on my apartment wall reads ‘Hamilton College,’ but by my calculation, it really ought to read ‘Alexander Hamilton Institute.’ So for all of this, I feel that I owe the AHI and its founders a debt of gratitude, and I look forward to supporting the AHI in any way that I can in the future.”

What always impressed me about Landry,” Professor Ambrose remembered, “were his intellectual hunger and his impeccable manners.  In class he was quiet but engaged.  He listened with care, turning issues over his mind, contemplating various interpretations and perspectives, coming to conclusions only after weighing the evidence and arguments.  He also took criticism well.  Like the wisest among us, he knew that learning requires humility and the willingness to work in order to master both the knowledge of a topic and the means to express that knowledge.  In his first course with me, which he took as a first-semester sophomore, Landry earned a B-.  Two years later, in the senior thesis class, he earned an A-, writing a thoughtful and perceptive paper on dueling in antebellum America.  He was a joy to teach.  He was also a joy to know.  Kind, considerate, and blessed with a great sense of humor, he was a gentleman.  He treats others with the respect and consideration that grows out of and reflects his character, a character of decency, integrity, and principle.  Landry is a fine young man, one that we at the AHI are proud to call one of our own.  He has the kind of mind and heart of which this world needs much more.”

“Landry Frei put into the AHI more than he took out,” said AHI Executive Director Robert Paquette.  He is not afraid to sweat. My wife, who worked with Landry in God knows how many events calls Landry, ‘One of the noblest young persons she has ever met.’”  I can second the motion and add most courageous as well. Whenever the AHI needed him, he answered the call and performed at a high level.”