The Alexander Hamilton Institute for the Study of Western Civilization (AHI) is pleased to announce the award of a summer internship to Walker Cummins of Richmond, Virginia.  Walker and his friend John Madigan, also an AHI Undergraduate Fellow, are working to revive Hamilton College’s Republican Club. 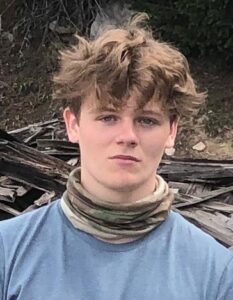 “Growing up in Richmond,” Walker observed,  “I had the privilege, one which I have come to appreciate more and more in the year since my graduation, of attending the Collegiate School, a private school in the city, from kindergarten to the twelfth grade. Through elementary and middle school, history, math, and science engaged me, a kid who really just wanted to know what the world was, most intensely. However, in large part due to a string of excellent English teachers, my active interest in STEM subjects cooled a great deal, as my interest migrated to the world of literature and writing. The energetic desire to pierce veils and behold the real, effective elements of the world as experienced, found satisfaction in the world of literature, art, and philosophy. In retrospect, I have found that in my earliest, serious engagements with novels and poetry, I was approaching texts with something like the aims of a completely untrained, continental philosopher. My passion for literature crystallized in the fall of my senior year, when I took a semester-long class solely dedicated to the study of David Foster Wallace’s Infinite Jest, taught by Dr. Bart Thornton. Dr. Thornton’s initiation to Wallace and Jest introduced me to an attitude about reading and writing, a new way to approach language, postmodernity generally, and an intoxicatingly hyperreal aesthetic of the 21st century.”

As of late Walker’s intellectual pursuits have zeroed in on questions of what the substance of postmodernism is, what postmodernism means, what might come after it, and how we might rise to the challenges it presents in the worlds of literature, philosophy, and politics. “While Michel Foucault or Pierre-Félix Guattari might have seemed like revolutionaries in mid-century France, where Catholic conservative views still wielded great influence,” said Walker, “well-paid, tenured academics,  following in the tradition of the aforementioned thinkers, can only register as bourgeois pharisees, salaried by the skillful investments of trustees who work in corner offices on Wall Street.”

Walker believes that task falls on conservatives, at least the serious ones, “to examine honestly capitalism and progressivism as the children of Christianity, attached at the hip, one sibling, increasing outspoken, delirious, and ineffectual, being dragged along by the other sibling, increasingly quiet, hulking, and ravenous. That so many foundational postmodern thinkers took their politics in a direction that is at least vaguely anarcho-communist, and were so aggressive in labeling anything to the right of themselves as fascist, might be taken as an indication of a creeping anxiety that the postmodern realization might tend towards a reactionary conclusion. Postmodernism relentlessly poisons Enlightenment political thought and economic thought, as well as their offspring, and it would be deceitful for leftism and progressivism to deny their rootedness in Enlightenment, capitalism, and liberalism. Only a rejection, of the Enlightenment or of formal, instituted government, evades that broad thrust of postmodern criticism.”

Beyond the role of postmodernism in right-of-center thought, Walker continues to investigate ideology, ontology, and what is possible for conservatives. “Questions that haunt me, and ought to haunt all conservatives are, What is there to conserve?  What is even possible to conserve? Every generation of conservatives has found itself several steps retreated from that of their fathers. Is dispositional conservatism merely prolonging a period suffering and decay? Is there even a foundation for the reconstruction desired by traditionalists? Is conservatism, as a reaction to the ‘progressive’ processes initiated by the Enlightenment, even a viable project, or is it captured and condemned to fail by its nature?”

In seeking to answers to these and other questions, Walker will be working on multiple projects.  He will serve as a research assistant to AHI Resident Fellow Dr. David Frisk, who is completing a major intellectual biography of Willmore Kendall, one of the most brilliant political theorists in American history.  Walker will also be working closely with the Charlemagne Institute, “an educational, non-profit organization leading a cultural movement to defend and advance Western Civilization.”  He has also joined AHI’s summer reading cluster for undergraduates. AHI has provided each participant with a copy of Andrew Bacevich’s anthology American Conservatism: Reclaiming an Intellectual Tradition (Library of America, 2020).  Using Zoom, Dr. Frisk is directing weekly discussions of selections from Bacevich’s book.

“Walker Cummins,” AHI President Robert Paquette observed, “has shown himself to have an omnivorous mind.  On his own, he explores challenging readings that have disappeared from courses at elite colleges and universities.  On the subject of intellectual conservatism, Hamilton College has little to offer him.  His work with John Madigan to reestablish the Republican Club at Hamilton College has taken not only energy, but considerable courage.  We look forward to working with him and others like him through these tempestuous times of thuggery and intimidation, openly aided and abetted on campus by administrators and faculty.”

Mr. Cummins internship was made possible by a grant from The Bertha and John Garabedian Charitable Foundation.