During the summer of 2016, the Alexander Hamilton Institute for the Study of Western Civilization (AHI) inaugurated the Washington Program on National Security (WAPONS).  Directed by AHI Senior Fellow Dr. Juliana Pilon the summer program admitted twenty-one students from across the country on a competitive basis.  Jessica Castellanos, one of three Hamilton College undergraduates chosen to participate, is planning a career in national security. She has a compelling story about how she arrived where she is, a journey from tyranny to freedom. 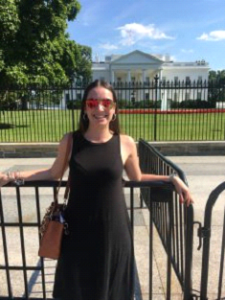 Jessica came to the United States as a babe-in-arms with parents who had fled communist Cuba. They made their way to Miami, and she grew up there in a Spanish-speaking neighborhood of Cubans, Dominicans, Puerto Ricans, and Columbians. While enrolled in a dual high school and community college program, she accumulated over 400 community service hours working in a children’s home and helping her sixth-grade math teacher in after-school activities. She graduated in April 2014 summa cum laude with an Associate of Arts degree from Miami Dade College and then, a month later, from high school.  After winning a scholarship from the Posse Foundation, she began the fall semester 2014 at Hamilton as a freshman (the community college credits did not transfer).

Jessica recalled that she was first inspired in her career choice by her favorite childhood cartoon, Scooby-Doo, whose two female characters, Daphne and Velma, solved crimes. Family friends encouraged her to pursue more traditionally female professions like teaching or nursing, but her parents gave their approval when she told them she wanted to be a detective.   In fact, her father confessed that he had wanted to do something similar when he was younger.  The two-week WAPONS program, held in Washington, D.C., instilled in Jessica the confidence to pursue a career in national security, helping her to overcome doubts related to her gender and to her immigrant background.  The program, she said, expanded her breadth of knowledge about national security, discovering sectors she would not have otherwise known even existed, and opening up new potential career options for her. Conversations with top people in the field were inspiring, and convinced her she was making the right decision. She says, “It was in Washington D.C., in our nation’s capital, that I was convinced a career in the Intelligence or National Security sector was perfect for me.”

Jessica has stayed in touch with the other WAPONS students, as well as with Dr. Juliana Pilon, a former director of the Center for Culture and Security at the Institute of World Politics in Washington, D.C. and a scholar who has taught and published extensively on international relations and national security.  Dr. Pilon provided Jessica and the other students with “a wonderful time” as a “guide and leader.”   In turn, Dr. Pilon, says that Jessica “was one of the most active, enthusiastic, and engaged participants.  She was deeply interested in the topics, passionate, and completely receptive to the ideas and the people she met.  It was such a pleasure to watch her enjoy the experience, make friends, and blossom.  She was a delight.”

This semester, while taking a full course load, Jessica is working at two jobs in the Hamilton College library, at the circulation desk and in book processing. The processing—shelving books, putting on barcodes, sensitizing strips, and inputting books into the library system—is very detail-oriented and it is why Jessica’s library supervisor suggested that she apply.

Jessica admits that the move to Clinton, New York, from Miami was a bit of a “culture shock.” Just about all the students’ parents speak English at home, and she was surprised to learn that she spoke English with an accent. Jessica’s bilingualism has proven advantageous, though. “While one of my freshman year roommates struggled with introductory Spanish, I was coursing through a 201 level course,” she says. She is currently taking upper-level courses so she can perfect her Spanish and read more Spanish literature. She has been helped by the mentoring provided by the Posse scholarship, inspired by a student who had told the founder that he wouldn’t have dropped out of college if he had had his “posse” with him. Jessica’s “posse” of nine fellow scholarship students from Miami, as well as older students and a faculty mentor, offer support.

After study and work, Jessica likes to relax by watching movies on Netflix. She has been trying to watch more classics and psychological thrillers–classics to better understand cultural references and psychological thrillers because they remind her of cop shows like Criminal Minds and force her “to think about the missing piece . . .  sort of like a mystery but with a twist.” Carrying over a family tradition of “movie-night,” Jessica sometimes will watch an episode while discussing it over the phone with her sister in Florida.

After graduating with a degree in Sociology and Hispanic Studies, Jessica plans to go to graduate school to study sociology with an emphasis on criminology, intelligence, or criminal justice—a plan inspired in large part by her experience with WAPONS.  Last summer, she added a new roster of friends from the WAPONS program that she stays in touch with. In a thank you note to Dr. Pilon she wrote, “The group couldn’t have gotten along better and our friendships are connections that will last a lifetime. I will be recommending the Alexander Hamilton Institute and the WAPONS program to my friends. . . .Thank you for this opportunity and for allowing me to see your home, a new city, and what my future in national security could look like. I was so blessed to have been part of AHI’s program and I think that I will forever look back on the experience fondly.”   AHI Executive Director Robert Paquette has his Hamilton College office not far from where Jessica works.  “The AHI has plans for Jessica Castellanos,” said Paquette.  “Her enthusiasm and high energy are infectious; she has learned the value and fragility of personal freedom from her parents. We hope that she will become even more involved in AHI activities.  Several of my own protégés now have careers in security and the FBI.  I intend to link her with them.”