This summer strains of Russian can be heard in the mansion that houses The Alexander Hamilton Institute for the Study of Western Civilization (AHI) as Edward Shvets, undergraduate fellow and 2019 summer intern, keeps in touch with his family. Edward hails from Brooklyn. He grew up in Brighton Beach, a community with a sizeable presence of Russian immigrants. Edward is the son and grandson of Russian Jews who fled the Soviet Union at the end of the 1980s. 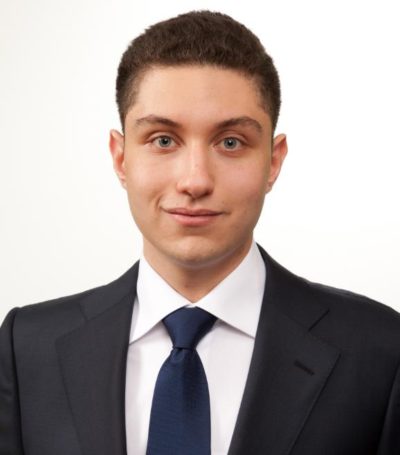 In Brooklyn, Edward attended public schools. Mindful of both safety and punctuality, he arose at 5:00 in the morning so as to ensure his attendance and readiness for a day of learning. Certain high-school teachers recognized his gifts and helped prepare him for advanced education.  His impulse for public service had its roots in an AP English Language class, where he first read President John F. Kennedy’s inaugural address. Alongside his Advanced Placement classes, he participated in Syracuse University Project Advance, a concurrent enrollment program, and completed college-level courses in public policy and personal finance.  That November, he spent a week in Ulm, Germany, at the Germany Trade Fair, as a judges’ assistant and trade show representative. It was his first time outside of North America. (His family has never returned to visit Europe.) He did undertake “some tourist activities and stayed with a very hospitable and friendly host family for the weekend,” but focused on the “two main objectives: to meet, interact, and engage in simulated commerce with people in the Virtual Enterprises International organization from all over the world and to assist the NYC Virtual Enterprise Director and other judges of the 2016 Global Enterprise Challenge.” At the conclusion of that academic year, Edward graduated as the valedictorian of his class.

Edward’s plans for a business-finance career, which were inspired by his leadership in the Virtual Enterprises program, were overtaken by scholarly curiosity and interest in government after interning at Public Resources Advisory Group in the summer following graduation and starting his undergraduate education. He entered Hamilton College in 2017 and as a rising junior, declared majors in both history and government.  He has a special appreciation for the personal freedom he and his family enjoy in the United States. His interest in American political history derives in part from his recognition of the fragility of freedom and of the duties and responsibilities required of citizens for its preservation. To that end, he will be undergoing an intensive directed reading by AHI President Robert Paquette on The Federalist, all eighty-five essays. He will also be helping Resident Fellow David Frisk in research for his biography of Willmoore Kendall, a mentor to William F. Buckley and one of the most brilliant political theorists of his generation.

As an undergraduate, Edward was inspired by reading Edmund Burke’s classic Reflections on the Revolution in France (1790).  “In history,” Burke wrote, “a great volume is unrolled for our instruction, drawing the materials of future wisdom from the past errors and infirmities of mankind.”  In explaining his interest in history, Edward echoed Burke in seeing history as an enterprise “full of lessons” waiting to be unraveled.  “Once I understood, in its proper context, Burke’s assertion that ‘the state ought not to be considered as nothing better than a partnership agreement in a trade of pepper and coffee… to be taken up for a little temporary interest’ but ‘be looked on with other reverence’ as it is a ‘partnership in all science; a partnership in all art; a partnership in every virtue, and in all perfection,’ my passion for the social subjects was set ablaze.”

During the summer of 2018 Edward worked as an intern for Congresswoman Claudia Tenney in her bid to win reelection in the 22nd Congressional District of New York. He was compelled to join Tenney’s campaign because of her stance on “individual liberty, capitalism, and the right to bear arms.” He found on her team “camaraderie, compassion, and a strong work ethic.” It was an honor, he says, to meet and communicate with the Congresswoman herself whom he describes as “a personable and caring individual—a woman of immense character who inspires the people around her.” Edward particularly enjoyed meeting and speaking with constituents of the NY-22 district, a region of rolling hills with dairy farms and corn fields, villages, and the cities of Utica and Binghamton that, like much of the Northeast, have seen the loss of industries. Edward and other interns acted as helpful ears to Tenney, reporting observations. He learned that “many residents in the district are concerned about the state’s sluggish economy, their Second Amendment rights, the opioid epidemic, and farming policies.”

Edward’s work in Ms. Tenney’s campaign coupled to an impressive track record of community service made him a compelling candidate for the White House Internship Program, the premier public service opportunity for the nation’s young leaders. Competing against thousands of applicants from across the country, he attained this prestigious honor and interned at the White House during the spring semester, 2019.  The program looks for “committed citizens” to form “a select group of young men and women from across the country” who will “dedicate their time, talents, energy, and service to better the White House and the Nation.” The experience was truly “an honor and a privilege,” says Edward. “I will never forget the day of our WHIP class photo and I will always carry forth the compassion, integrity, and sense of duty demonstrated by my supervisors and our President.”

Edward’s involvement with the AHI began during his freshman year when he attended a special event, Dr. Andrew Porwancher’s lecture on George Washington’s Farewell Address.  “I was captivated by the beauty of the historic Federal-style mansion that stands as the AHI headquarters and the intellectual sophistication of that evening’s discussion.” Since then he has attended the speaker series which included a presentation by AHI co-founder and Charter Fellow James Bradfield, retired Professor of Economics, on the Coase Theorem, an “engaging, informative, and nuanced discussion,” and Professor Ambrose’s Constitution Day lecture. A particularly memorable experience was attendance at the Monticello Colloquium dedicated to discussion about Jefferson at his home in Monticello. “What secured my involvement,” he stated, “was the institute’s commitment to its undergraduate fellows and excellence in scholarship.”

Edward became a staff writer on the AHI-sponsored, student-run publication, Enquiry, in his sophomore year. In the process he met and worked with “extraordinary individuals”: Editor-in-Chief Claire Anastasia Kitz, Managing Editor Andrew Juchno, and AHI Resident Fellow Dr. David Frisk. “Everyone involved was of exemplary academic integrity and provided support in the article-creation process.” He also pointed to his “time assisting Resident Fellow Dr. Mary Grabar with parts of her research” and described it as “an educational and skill-enhancing experience.”

Edward appreciates the amount of work that goes into running the AHI, and extends special thanks to Co-founder, President, and Executive Director, Professor Robert Paquette, describing him as “a man who truly cares for his students, mentees, colleagues, and the pursuit of knowledge,” and one who “labors tirelessly to uphold academic excellence and puts his heart and soul” into the AHI. He also conveyed his admiration for co-founder and Charter Fellow of the AHI, Professor Douglas Ambrose, describing him as “a legendary instructor,” who “spreads his intense passion for history and learning to his students.” He found the Old South class, co-taught by Professors Paquette and Ambrose, which he audited, to be “incredible.” Overall, “academic excellence and integrity shine throughout the AHI’s structure and membership.”

About his intensive studies this summer, Edward said he looks forward to “delving into one of the most important works of political science ever written and uncovering salient pieces of wisdom that can aid us as a nation navigate current and future turbulent waters.” In the upcoming academic year, he plans to continue to write for Enquiry.  “The Institute’s support,” he observed, “has not only developed my intellectual capability and advanced my professional skillset but also strengthened my personal fortitude and invigorated my spirit. As a first-generation American, the son of Russian-Jewish immigrants who fled the Soviet Union, it is a great blessing to have been born in the United States, and a great joy to have the opportunity of higher education. For me, education has meant liberation. I am very appreciative that the AHI has supported me in my journey and that I have the chance to be part of something that strives to uplift the human spirit.” In a message for others perhaps contemplating involvement, he says, “The Alexander Hamilton Institute transcends the boundaries of any classroom, building, or city. It has the potential to touch the hearts and better the lives of countless people, just like it did mine.”

In making hiring decisions, AHI President Robert Paquette noted, “employers sometimes ask applicants, ‘What adversity have you overcome in your life.’ On that score, Edward Shvets has already earned a very high grade.  This young man has impeccable character coupled to intelligence, old-school manners coupled to insatiable curiosity.  In the months ahead, he will play an important role in leading AHI’s undergraduate program.  It is a sad fact of postmodern life that increasing numbers of young persons graduate from elite institutions ignorant of history and dripping in anti-Americanism.  To that trend Edward Shvets intends to stand as a powerful antidote.  AHI could not be more pleased in having this exceptional young patriot as a summer intern.”