Taylor Elicegui, Hamilton College senior and Undergraduate Fellow of the Alexander Hamilton Institute for the Study of Western Civilization (AHI), is pursuing her passion for law and politics.  She spent this summer working as a press intern for Democratic U.S. Senator Kirsten Gillibrand of New York. This internship followed on the heels of another, working in the spring 2016 as Gillibrand’s Central New York Regional Intern. Before that, in 2014, she worked as a summer intern in the Washington, D.C., office of Senate Majority Leader Harry Reid. 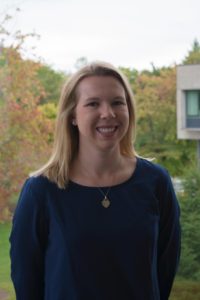 Taylor came to Hamilton College from Reno, Nevada, the state that Senator Reid represents in Congress. The Lake Tahoe area provided her an opportunity to develop another passion, ski racing, which she pursued by attending ski camps in Argentina, New Zealand, and Chile. In high school, Taylor raced competitively through the Federation International de Ski (FIS).

A government major who has been on the dean’s list since her first semester, Taylor plans on practicing law and is applying for graduate study at several elite law schools.  Like many AHI Undergraduate Fellows, she learned about the AHI while attending a course, “History of the South,” co-taught by AHI Executive Director Robert Paquette and AHI Charter Fellow Douglas Ambrose.  Since the second semester of her freshman year, Taylor has been actively involved with AHI, participating in most events and contributing to Enquiry, the AHI-sponsored student newsletter. Last spring, she was chosen to participate in the Annual Undergraduate Conference on the American Policy, an event co-sponsored with Skidmore College’s Benjamin Franklin Forum and held on the campus of Skidmore College.

Taylor plans to write as a guest contributor to Enquiry this semester. Her past essays, as a staff writer, on concealed carry laws on campus, the Supreme Court on marriage rulings, and Republican support for over-the-counter birth control, show the ability to make a sophisticated analysis of subjects that defy easy ideological categorization.  Her ability to think independently and deeply has impressed Paquette.  “I remember in particular a dazzling essay she wrote on the varied meaning of republicanism from the time of the founding of the Republic to the framing of the Constitution,” he observed.  “Taylor had completed a cover-to-cover reading of Gordon Wood’s Creation of the American Republic and had excavated a precious amount of material in researching a database with the best collection of eighteenth century newspapers.  I have never given an A+ on any assignment during my 36-year career.  I came very close in this case.”

Taylor decided to work for Senator Gillibrand, a likely future presidential candidate, because of her respect for Gillebrand as a politician and Taylor’s desire to learn more about careers in the Senate. She describes her admiration for Senator Gillibrand as multifaceted and including her championing of the same issues she is passionate about, such as paid family leave. Citing Gillibrand’s book, Off the Sidelines, in which she describes taking her son, Henry, on the floor of the House, Taylor says, “I also see her as a great example of work/life balance.”

Taylor has high praise for the AHI. It “forces you to think clearly and challenges you through exposure to new ideas,” she said, adding that Professors Paquette and Ambrose have helped her develop her writing skills and refine her prose.  As an AHI Undergraduate Fellow, she said, “I’ve been exposed to ideas and subjects I would not have experienced otherwise.” These included one of her first AHI experiences, attending a talk about architecture. She has met leaders in the field that greatly interest her, including Professor Michael Munger, “a leader in campaign finance and free speech” during the 2015 Carl Menges Colloquium. As she noted in her remarks at the AHI Constitution Day Open House recently, she was pleasantly surprised to learn that Munger had written the winning brief for the 2010 Citizens United Supreme Court case.

Calling AHI “a great supplement to any liberal arts education,” she said, “I would encourage all Hamilton students to get involved with the AHI.”