The Alexander Hamilton Institute for the Study of Western Civilization (AHI) celebrated its eleventh anniversary on November 15-17 with a special event at Monticello, “Hamilton v. Jefferson: On History, Freedom, and Republican Government.”  More than a dozen of the world’s foremost Hamilton and Jefferson scholars conversed on the character and principles of these two giants of the founding era in front of an audience that included students from the University of Virginia, SUNY-Oneonta, the Rochester Institute of Technology, Villanova University, the University of Kentucky, and Hamilton College. It was a memorable event that honored a special person, Carl B. Menges, without whom AHI would not exist.

During the opening night banquet, which featured a keynote address by Annette Gordon-Reed of Harvard Law School, AHI Executive Director Robert Paquette announced that after thirty-seven years of service, he will be leaving Hamilton College at the end of 2018 to accept the presidency of AHI.  He succeeds Richard Erlanger who will become an emeritus member of AHI’s board of directors.

“It is no secret,” said Paquette, “that I have become uncomfortable with the direction of Hamilton College.  In accepting the presidency of AHI and continuing on as its executive director, I intend to ensure that AHI becomes an enduring edifice of educational excellence in keeping with the finest traditions of liberal arts education.  With that in mind, AHI will begin 2019 by focusing on three major initiatives:  building an endowment; reinvigorating liberal arts education, especially the study of the discipline of history; and expanding our outreach to kindred-spirit organizations.”

At the Monticello colloquium, Paquette thanked Erlanger for standing with AHI from its inception. “Dick has labored without pay as a volunteer committed to a cause, for almost a decade. He handled board meetings, legal matters, outreach, and much more. Aristotle reminds us that ‘In all friendships between dissimilars’— in this case between a historian and a successful entrepreneur—‘it is . . . proportion that equalizes the parties and preserves the friendship.’  I give thanks that Dick Erlanger is an Aristotelian and not a radical egalitarian.”

AHI Charter Fellow James Bradfield also acknowledged Dick Erlanger’s contributions to the growth and expansion of AHI.  “Dick drew on his extensive experience in business to manage the fiscal and legal aspects of the Institute, thereby enabling others to concentrate on programming and other scholarly activities.  With his informed interest in the classical traditions, military history, and the history of Western civilization. Dick also participated vigorously in the discussions at AHI’s annual colloquia.  We look forward to his continuing wise counsel.”

Hunter Brown, AHI’s first president, echoed Bradfield’s praise. “Dick Erlanger will be stepping down from the Presidency of the AHI at the end of 2018. He assumed the Presidency in mid-2009 and for some nine years presided over every major administrative, executive, and governance issue of the AHI. His style was marked by dedication, concision, decisiveness, and credibility. There was no confusion. There was always access to listen and discuss.  Dick’s leadership engendered confidence of donors, scholars, students, and directors alike. He believed in the mission.”

The idea of creating a center inspired by the life and work of Alexander Hamilton grew out of a lunchtime conversation between Carl B. Menges and Robert Paquette almost two decades ago in the historic mansion that is now AHI headquarters.  “Bob Paquette has earned a national reputation with the academy not only for the quality of his scholarship,” said Mr. Menges, “but for his creative, innovative, and highly professional development of one of the first and most successful ‘oases of excellence.’ He has fashioned extensive, sophisticated programmatic activities, often in partnership with a number of highly rated colleges and universities, offering enrichment in the study of Western civilization and in the disciplines of political science, economics, law, and history.  This programming and his teaching at Hamilton College have deeply impacted the educational experience, indeed, the lives, of an impressive number of undergraduates!  Bravo Bob.”

At Hamilton College, Paquette had the pleasure of teaching and working with two sons of AHI board member Bob Hamill, who congratulated Paquette on his exit from Hamilton College.  “The Hamilton College faculty has suffered yet another major loss in the struggle to bring intellectual diversity to undergraduates. Thankfully, those who want to study The Federalist, Austrian-school economics, private property rights and capitalism will be able to do so at the Alexander Hamilton Institute in Clinton. Good luck and God speed to Professor Paquette in his new role as President of AHI.”

Jane Fraser, president of the Stuttering Foundation of America, serves on the board of directors of both AHI and the American Council of Trustees and Alumni.  “There can be no doubt,” she wrote, “that Bob Paquette has profoundly impacted the educational experience of hundreds of students, not only from Hamilton College but also from across the country.   He has indeed earned a national reputation as a defender of Western civilization and all that that entails.Thanks to Bob’s untiring efforts, The Alexander Hamilton Institute exemplifies what the educational experience should be nationwide. Bob stands as a beacon of the finest that there is. He is an inspiration to us all!” 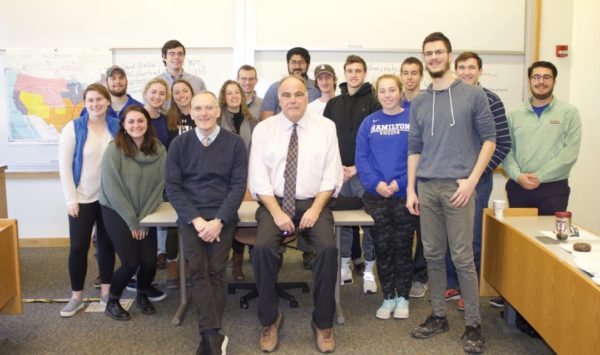 On Wednesday, December 5, Paquette held his last class at Hamilton College in a course co-taught with AHI Charter Fellow Doug Ambrose. “From AHI’s inception more than ten years ago,” Ambrose reflected, “it has benefited enormously from dozens of people who have recognized the urgent need for it, have devoted incredible energy and resources to it, and have nurtured it in countless ways.  The success of the AHI has depended and will always continue to depend on this broad support, but it has relied, especially, on the tireless and able leadership of Bob Paquette and Dick Erlanger.  Dick has been invaluable shepherding AHI over and around bureaucratic hurdles and securing its financial and legal foundations.  Bob has been the indispensable intellectual inspiration and organizer of nearly every scholarly activity in which AHI has been engaged.  A man whose commitment to intellectual excellence is matched only by his moral courage, his efforts have enriched countless students, educators, and members of the community.  I have been privileged to teach with him for twenty eight years, and his interest in and care for students have been a constant source of inspiration.  His departure from Hamilton College is a great loss to its students.  As Bob concludes his teaching career and moves full time into the presidency of the AHI, we know that his efforts to promote serious scholarship, an engaged and informed citizenry, and a culture that values learning, civil discourse, and intellectual diversity will continue to bear good fruit.  As impressive as the AHI’s achievements have been, we can look forward to even better years ahead as Bob develops and oversees more colloquia, more reading groups, more lectures, more adult education classes, and more of the active, lively, and provocative discussions that we so desperately need. 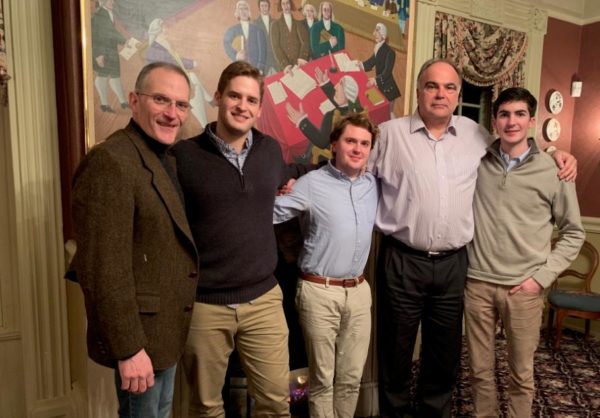 In looking back at activities for 2018, Paquette highlighted along with the Monticello colloquium, Sam Bowlby’s moving Veterans Day lecture; the packed house at the Fenimore Museum for “Alexander Hamilton: What You Should Know”; the Annual Undergraduate Conference in the American Polity, held at Colgate University;  the acclaimed WAPONS summer national security program, directed by AHI Senior Fellow Dr. Juliana Geran Pilon; the Mary and David Nichols Annual Conference in the Great Books, co-sponsored with Baylor University’s Department of Political Science; and AHI’s recognition in the award-winning documentary, The Fight of Our Lives, by Gloria Greenfield.  “All one has to do is look at our calendar for 2018 to see what a busy year we’ve had:  Constitution Day events, reading clusters on various campuses, continuing education courses at AHI; and a wide-range of programming by organizations affiliated with AHI.”

“During my thirty-seven years at Hamilton College, I have had the privilege of working closely with and mentoring a large number of impressive young people. They populate a wide variety of high-profile occupations and hold political views that range the spectrum.  As they all know, I drove them hard, setting the bar high for each and every one of them. I made their lives difficult, sometimes miserable— by design— because nothing that is good and true and valuable in this life comes without struggle. I passed onto them an adage inherited from my own mentor, the great historian Eugene Genovese, that ‘a friend who is no critic is no friend at all.’  I did not enter this profession to be loved or to extract from Hamilton College cradle-to-grave security.  The greatest reward is whatever success I have had in fortifying the intergenerational contract by working with young men and women inside and outside the classroom in acquainting them with the deposits of wisdom embedded in a worthy heritage.”

In that regard one of Professor Paquette’s former students wrote him on December 8 to tell him that he had been accepted into a prominent law school.  His words prove more than appropriate for a letter that speaks of ends and beginnings:

“In the past 24 hours, I have reflected on how many events, both large and small, led up to this, leaving me incredibly thankful for the relationships and experiences I cultivated along the way. It is safe to say I never would be in this position without professors like you and classes like The Old South. The impact you had on my writing and general intellect was enormous and if there is one thing I regret during my time at Hamilton, it’s that I didn’t take one of your courses sooner. . . .  I certainly don’t anticipate this being the end of any connection and, as a small token of gratitude and commitment to maintaining this relationship, will be offering a donation to The Alexander Hamilton Institute in the coming days. I firmly believe in its message and importance in guaranteeing open dialogue in the Hamilton College community and it is my hope that it remains an institution through which I may indicate my support for free thought and other values I strongly believe in.”

From all of us at AHI, we thank you for your support and ask you to remember us at the end of the year if you have not yet made a tax-deductible donation.

May you have a joyous holiday with family and friends.