The Alexander Hamilton Institute for the Study of Western Civilization (AHI) is pleased to announce that Samuel Bowlby (Hamilton, Class of 2004), will deliver the Sixth Annual General Josiah Bunting III Veterans Day Lecture.  The event will take place on Sunday, November 11, at 7 p.m. in the Kennedy Auditorium, Taylor Science Center, at Hamilton College. Mr. Bowlby will discuss “Leaving Your Comfort Zone:  The Ongoing Battle to Challenge Oneself and Maximize Potential.” The event is free of cost and open to the public. 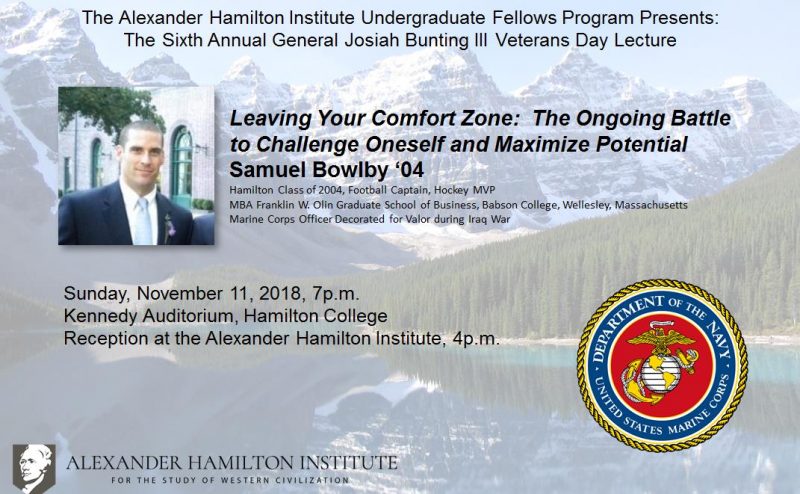 Mr. Bowlby served as an infantry officer in the United States Marine Corps. He commanded troops under fire in Iraq and received both achievement and commendation medals from the Navy and Marine Corps. At Hamilton, Mr. Bowlby majored in government. He captained the football team and was former MVP and all league selection for football. He also played on the college golf team. After completion of his military service, Mr. Bowlby earned an MBA at the Franklin W. Olin Graduate School of Business at Babson College in Wellesley, Massachusetts.

The annual lecture honors General Josiah Bunting III, a charter member of the AHI’s board of directors.  General Bunting was graduated from the Virginia Military Institute in 1963. He subsequently studied at Oxford as a Rhodes Scholar and at Columbia University as a John Burgess Fellow. During active duty with the United States Army, he served as an infantry officer in Vietnam with the Ninth Infantry Division. During his military career, General Bunting received the Bronze Star with two Oak Leaf Clusters, Army Commendation Medal, Vietnam Honor Medal–2nd class, Presidential Unit Citation, Parachute Badge, Combat Infantry Badge and Ranger Tab. Subsequently, he taught history at West Point and at the Naval War College. He served as President, Briarcliff College (1973-1977); President, Hampden-Sydney College (1977-1987); and Superintendent, VMI (1995-2003). General Bunting has published four novels, including The Lionheads (G. Braziller, 1972), a best-seller that was selected by Time Magazine as one of “The Ten Best Novels” of 1973.