Andrew Juchno, co-leader of The Alexander Hamilton Institute Undergraduate Program at Hamilton College, has had a banner year. A government major from Paxton, Massachusetts, Juchno received in 2019 a scholarship to undertake graduate work at Yale Divinity School in the fall. Prior to his matriculation at Yale, Juchno will travel to Washington D.C., having earned a prestigious fellowship at the Hertog Foundation to study religion and politics in a seminar directed by Yale political scientist Bryan Garsten. More recently, Juchno learned that he was one of fifteen students from across the country to receive a Gilder Lehrman History Scholar Award. 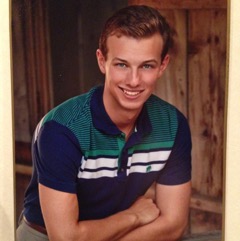 Founded in 1994 by Richard Gilder and Lewis R. Lehrman, the Gilder Lehrman Institute of American History “is the leading nonprofit organization dedicated to K–12 history education.”  It sponsors a wide array of public programs, including traveling exhibitions, designed to educate persons young and old in American history.  As part of the award, Juchno will spend six days, June 2 – June 7, in New York City, participating in a program of special presentations, including meetings with eminent scholars.  He will be also be given a special tour of Gilder-Lehrman’s archival holdings and receive his award at a celebratory dinner.

Juchno’s passion for the politics and history of the colonial United States led him during the 2017-2018 academic year to the College of William & Mary in Williamsburg, Virginia. There he matriculated as an undergraduate exchange student in the Collegiate Program in Early American History, Material Culture, and Museum Studies. This highly competitive program, sponsored jointly by the College of William & Mary and the Colonial Williamsburg Foundation, “provides an interdisciplinary approach to early America, material culture, and the purpose and operation of museums.”  At William & Mary, Andrew attended courses in American history, and worked as a researcher in museums.

“The Alexander Hamilton Institute takes great pride in the achievements of Andrew Juchno,” said AHI President Robert Paquette. “He is a standing metric that attests to the quality of the nurturing we do. Andrew received a summer fellowship to participate in the intellectual life of AHI and helped several resident and non-resident scholars in their research. I have taught him in the classroom and have had wide-ranging conversations with him in my office. He writes well and is associate editor of Enquiry, our student newsletter. He participates in AHI reading clusters. He relishes the challenge of painstaking research in the labor of historical reconstructions according to the highest standards of the discipline.”

AHI Charter fellow Douglas Ambrose also worked with Juchno inside and outside the classroom. “Possessing both an active, inquisitive mind and a healthy dose of intellectual humility,” Ambrose observed, “Andrew is a joy to teach.  He does not shy away from the hard work that the life of the mind demands, and he loves grappling with the difficult questions of history, especially the relations among faith, social order, and politics. Thoughtful and disciplined, Andrew will prove to be an excellent graduate student and an important scholar.  We here at the AHI and at Hamilton College will miss him.”

AHI resident fellows David Frisk and Mary Grabar benefited from Juchno’s skills when he interned for a summer at AHI headquarters. “Andrew is a natural scholar, who, at the same time, pays close and perceptive attention to the world around him,” Frisk observed. “His combination of a quiet demeanor, an actively intelligent mind, and commitment to high standards of every kind is a powerful one, which will allow him to attain a special success in all of his chosen work.” Dr. Grabar concurs. “Andrew Juchno was an amazingly proficient research assistant, quick to grasp what I needed done, and quick to complete the task exactly as I wanted. He comports himself as a scholar and a gentleman and makes it known that he is happy to help in any way–even with a bicycle I had purchased (he is an avid cyclist). I truly enjoyed having Andrew at AHI.”

On April 27, Juchno was one of twelve undergraduates from across the country chosen to present papers at AHI’s Annual Undergraduate Conference in the American Polity. His paper, “God, A Quaker, and St. George Tucker: Moral Equality in the Gradual Abolition Movement of Early Republican Virginia,” derived from his senior thesis.  Joe Fornieri, Professor of Political Science, Rochester Institute of Technology, served as the professorial commentator on Juchno’s panel. “Andrew Juchno excavates new sources that shed light on the debate over slavery among Virginians at the time of the Founding,” Fornieri pointed out.  “In particular, he focuses upon the prominent figure of St. George Tucker and varying strategies for placing the institution on a path of ultimate extinction. His research clearly shows that the Virginians, including Jefferson, were well aware of the contradiction between slavery and the regime’s republican principles. I look forward to the publication of these findings that will, hopefully, lead to a more nuanced historical record.”

AHI congratulates Andrew Juchno on his impressive accomplishments. We are very proud of him.