“What Has Happened to Our Republic”?

Previous Next
“What Has Happened to Our Republic”?

As Americans approach Independence Day, Daniel J. Mahoney, Senior Fellow, The Alexander Hamilton Institute for the Study of Western Civilization (AHI) and Professor of Political Science, Assumption College, has published a bracing piece in Real Clear Politics on the state of the republic.  In “What Does Our Nation Mean to Us? Rejecting the Culture of Hate,” Dr. Mahoney warns that the country is approaching the abyss. 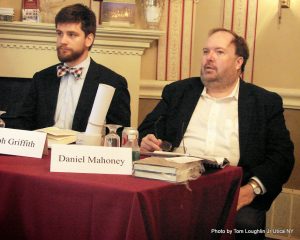 “The voices of sanity are few,” Mahoney observes, “and civic courage is in short supply. . .. The mob dictates, and subservient elites shamelessly comply.”  To understand what is happening, he calls on concerned citizens to read Fyodor Dostoevsky’s novel Demons, published during a tumultuous period of Russian history in the 1870s.  Mahoney calls it, “the most penetrating exposé of modern nihilism ever written.”

“Freedom has died many times in history, he concludes. “[L]et us not witness new death pangs on the anniversary of its birth.

Dr. Mahoney holds the Augustinian Boulanger Chair at Assumption College. His books include The Conservative Foundations of the Liberal Order (2011) and The Other Solzhenitsyn: Telling the Truth about a Misunderstood Writer and Thinker (2014).