Previous Next
Will Boudreau Awarded Menges Prize on Constitution Day 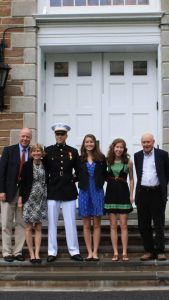 The Alexander Hamilton Institute for the Study of Western Civilization (AHI) is pleased to announce that William Boudreau from Wilton, Connecticut, has received the 2014 Carl B. Menges Award.  Mr. Boudreau, who majored in history at Hamilton College, accepted a commission upon graduation in 2014 as Second Lieutenant in the United States Marine Corps. He completed Officer Candidate School through the Platoon Leaders Class and will be attending in October an intensive six-month training program at The Basic School in Quantico, Virginia. He is currently interning at the law firm Baker & McKenzie in New York City, working for the firm’s Global Tax Practice Group.

In April of each year, the AHI holds as the pièce de résistance of its annual programming a major colloquium. It brings together scholars, students, and informed citizens for two and a half days of intensive conversation on a central theme.  Named after Carl B. Menges, a graduate of Hamilton College and the Harvard Business School and a charter member of the AHI’s Board of Directors, the colloquium includes classes of undergraduates. They read the same set of prescribed readings as the conferees and have assignments related both to the readings and the discussion of them at the colloquium. In 2007 Mr. Menges also established a fund to recognize undergraduate achievement at the colloquium.  Announcement of the annual award occurs on Constitution Day (September 17), the birthday of the AHI.

The AHI devoted its Seventh Annual Colloquium to the theme “The West and War:  Strategic Challenges Past, Present, and Future.”  Drawing on conference readings and others sources, Mr. Boudreau composed an essay that assessed the causes, objectives, and content of the War of 1812 in light of current discussions about asymmetrical warfare.  “One would be hard-pressed to find a young person with greater character and love of country than Will Boudreau,” said AHI Charter Fellow Robert Paquette. “The AHI can take pride in his intellectual growth during his undergraduate years.  He never whined about the criticism on his papers, but sought to improve.  His interest in military shone like a beacon light in the paper.  Little did I know that upon graduation he intended to join the Marines. I had the distinct honor of attending his commissioning ceremony.  The AHI’s prayers and best wishes go with him to wherever he is deployed.”