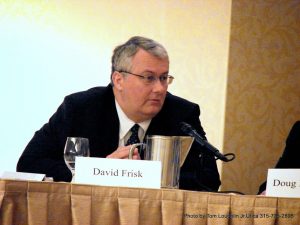 Professor Rosenfeld, the moderator, introduced the topic by describing recent changes to “our unique and fairly young system of selecting candidates.” The view among political scientists that “the party decides” who will be nominated much more than its voters has been “discredited” with Donald Trump’s capture of the Republican nomination despite the opposition of the party’s leaders. At the same time the “[Bernie] Sanders insurgency” exceeded expectations on the Democratic side. Even though Hillary Clinton “vacuumed up” personnel and resources, in both parties, party elites seem weaker, with less control. Conflict is stronger than ever; polarization among voters is at the highest rate since the Gilded Age.
David Frisk said he is seeing a new type of “partisan ID,” which, since it is a state of mind, is not the same as merely partisan voting behavior. “We are seeing something new: a negative partisan ID in the Trump and Sanders supporters,” he said. Many reliable voters increasingly are voting against a party rather than enthusiastically supporting their own. Within the Republican Party there is personal resentment against the party establishment, the “patricians” like George Bush, Mitt Romney, and John McCain, who just “don’t get it.” The “plebeians” are frustrated with Republicans because, even with control of the House and Senate, there is very little pushback against the Democrats. The Trump phenomenon may also be explained in part by the fact that the Republican Party, especially its base, has been more open than Democrats to outsider candidates with little or no political experience, especially if they come from business or military backgrounds.

Maurice Isserman began by qualifying his own credentials. As a historian, he said that he looks for patterns of “change and continuity.” This election, though, represents “all change and no continuity,” with no precedent for Trump. Even outsiders like Jimmy Carter and Ronald Reagan had had some experience holding public office. Isserman sees a surge in nativism, which began in the nineteenth century and continued with the defeat of Al Smith in 1928. Another potential change is in the role of debates, which traditionally do not decide elections. This pattern could change this year, as record-breaking ratings are anticipated.

Isserman also sees a shift in patterns of polarization, with an end to the triangulation of Presidents Jimmy Carter and Bill Clinton, who felt the pressure to shift rightward as they assumed office after Republican administrations. Hillary Clinton, as president, however, would feel no such pressure because she would follow a two-term Democratic president with a mandate for a more liberal agenda. She, instead, would feel encouragement to shift leftward. At the same time, Republicans have become much more conservative, in Isserman’s opinion.

Gbemende Johnson directed her comments to the focus of her scholarship: the president’s relationship with the judiciary. As in other aspects of politics, judicial appointments are being affected by polarization, with decisions made more along party lines, rather than qualifications. “The next president is walking into polarization,” she said. Obama has reshaped the bench to lean Democratic, but polls show the Republicans maintaining the Senate by a thin margin. A President Trump would have an easy time making lower court appointments but might face a filibuster from the Democrats on the Supreme Court. Democrats should not be too concerned about a Trump presidency, though, because the court would maintain its centrist “median” with the replacement of Justice Antonin Scalia with another conservative.

“The Republicans are much more nervous,” because a Clinton appointment would shift the Supreme Court—to the left, she added.
Members of the audience, especially students, asked a variety of questions concerning such things as Trump’s presumed nativism, the future survival of the two-party system, especially with a Trump loss, and the lack of enthusiasm among students for Hillary Clinton.  “A lot of people on campus say Hillary and Trump are the same,” said one student, alluding to the fact that Sanders was liked because of his outsider status. The idea of the first woman president is not as exciting for college age students as it is for their mothers and grandmothers who remember when such a thing was thought nearly impossible. Extreme polarization has led to “politophobia” on campus, one student observed.

David Frisk speculated about changes during a Trump presidency. “The Trump impact would not be that much on the whole,” he said. “Trump would try to move right on immigration and form a coalition on trade with the Sanders side, but would probably tend to follow the neoconservatives on foreign policy. There is a strong possibility of another war like the recent one in Iraq and perhaps in Iraq (although without the goal of nation-building) under his presidency. Chances of another Iraq war are the same for a Hillary Clinton presidency.
Questions kept coming until the event had to end at 6:00 p.m., with students continuing discussions with Frisk in the hallway and on the sidewalk.  “I was quite encouraged by the amount of interest, and the variety of points made about our topic” said Frisk. “Such discussions are good for citizenship and mutual understanding. In addition, the whole panel and our moderator were excellent.”