As a new academic year begins, Dean Ball, a proud alumnus of the Alexander Hamilton Institute for the Study of Western Civilization (AHI), is readying himself to help bring intellectual diversity to college and university campuses across the country.  Mr. Ball is Policy Manager of the Center for State and Local Leadership at the Manhattan Institute, arguably the foremost urban public policy think tank in the United States.  He co-directs “MI on Campus,” a program designed to introduce students to perspectives on public policy, economics, limited government, and culture that they might not otherwise encounter during their course work. 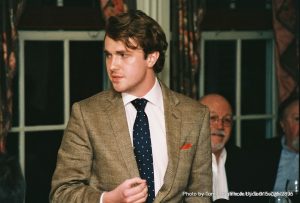 The goal, Mr. Ball explains, is “to get our scholars’ voices heard on college campuses.” The Manhattan Institute pays the scholar’s speaker fees and travel costs, so the event is virtually free of charge for hosting institutions. He estimates that the program has sponsored more than 100 events on campuses large and small across the country over the past two years. As a result, thousands of undergraduates have been exposed to alternative viewpoints on such issues as policing, free speech, healthcare, economics, and urban policy.

The AHI has benefited from the program, bringing to Hamilton College, an elite institution notably bereft of viewpoint diversity, distinguished fellows of the Manhattan Institute. In 2015, for example, Heather Mac Donald, Thomas W. Smith Fellow at the Manhattan Institute, spoke on the topic, “Are Cops Racist?” In January 2017, Kimberley Srassel, Wall Street Journal editorial board member and author of The Intimidation Game: How the Left Is Silencing Free Speech (2016), delivered a lecture on intimidation efforts, on and off campus, to silence speech.   For both events, AHI hosted a reception and dinner so that select undergraduates would have an opportunity with the guests to discuss relevant issues intensively.  As an AHI student leader Mr. Ball became intimately acquainted with the outstanding work of the Manhattan Institute. He heard Brian Anderson, editor of City Journal, who holds a Ph. D. in political philosophy from the University of Ottawa, speak on the French political theorist Bertrand de Jouvenel in a group independent study organized by AHI Executive Director Robert Paquette.  Mr. Ball also recruited Steven Malanga to speak on the Hamilton campus on the topic of urban debt: “How Many Detroits Are There?”

In administering the “MI on Campus” program, Ball contacts and is contacted by an ever expanding number of professors and student groups, many of whom find that funding to support intellectual diversity is either sparse or non-existent on their campuses. The program is open to all undergraduate institutions.   Although some of the Manhattan Institute speakers have been protested (or threatened with protest, as occurred at Hamilton College when the AHI sponsored Heather Mac Donald), the events, for the most part, have not elicited the kinds of raging protests that have been much in the news at campuses like Middlebury College and the University of California, Berkeley.

“One of the things I find so valuable about the program,” observed Mr. Ball, “is that we can get policy-driven conversations going on campus. Many college talks, even those ostensibly about policy, really end up being about the day-to-day politics around a particular issue. In my experience, even much of what gets talked about in political science classes is about process and politics, rather than about the substance of an issue. Our fellows’ role is to take a step back and try to impart broader understanding of a particular problem and its solutions.”

Mr. Ball says he hopes to sponsor more speaker events with AHI. The calendar of events includes Kim Strassel at Arizona State University, speaking about her book; Heather Mac Donald at Kenyon College, discussing campus free speech; Kay Hymowitz at Duke University, presenting on gentrification; and Alex Armlovich, one of the newest members of the Manhattan Institute, at the University of the Ozarks, speaking about the minimum wage. Friends of the AHI interested in participating in this important and remarkably generous program are encouraged to contact Mr. Ball at dball@manhattan-institute.org

“Dean Ball, an ascending young intellectual in his own right,” Paquette observed, “possesses a skill set, particularly well-suited for his work at the Manhattan Institute.  He attests to the value-added by four years of nurturing by the AHI.  I would strongly encourage anyone interested in trying to redress the often gross political imbalances and disproportions on college campuses to avail themselves of what the Manhattan Institute has to offer.  One of the most memorable events sponsored by the AHI was a panel on “Illiberal Education” that included Manhattan Institute Senior Fellow James Piereson.  We all know that the purse strings tend to get drawn tight when right-of-center students try to promote intellectual diversity on campus.  The “MI on Campus” program, funded by The Thomas Smith Foundation, a generous supporter of the AHI as well, effectively permits a bypass of administrative pusillanimity and close-mindedness.”