The Alexander Hamilton Institute for the Study of Western Civilization (AHI) congratulates Joe Simonson, co-leader of the AHI’s Undergraduate Fellows Program and previous Editor-in-Chief of Enquiry, on his new position as reporter and writer at Heat Street, a News Corp site founded in February 2016. Simonson begins his new job on March 1, leaving his editorial assistant job at the New York Post, a position he assumed after graduating from Hamilton College with a degree in history in 2015. 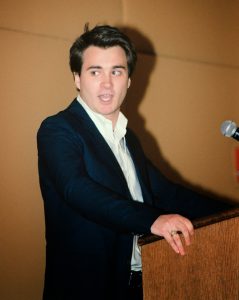 Simonson describes Heat Street as a center/libertarian-leaning platform that aims to draw in new readers with a fresh and edgy approach while providing “great reporting.”  Heat Street broke, for example, the news about Katie Rich being fired from Saturday Night Live for her derogatory tweet about Barron Trump, the president’s eleven-year-old son. Business Insider described Heat Street as “spikey right-wing website, which snorts at political correctness.”

Heat Street promises to be a great fit for Joe, given his undergraduate journalistic career and association with AHI in fighting the forces of political correctness and censorship. It began as editor-in-chief of the Daily Bull, an alternative campus humor magazine, which he resigned after continuous attempts at censorship by what he calls the campus “politically correct Gestapo.” That led him to the Alexander Hamilton Institute, where he participated in the wide variety of programming, including reading groups, conferences, and social events. With AHI’s support he and his “intellectual sparring partner” Paul Carrier founded Enquiry; Simonson served as editor-in-chief during his senior year. The newsletter is still going strong with issues published every week of the academic year.

Like many students who do not toe the campus party line, Joe found himself the object of attack by students, professors, and administrators. His and other AHI undergraduate fellows’ forthright criticisms of campus policies and commentaries on current events led to harassment and theft of copies of Enquiry from distribution points on campus. After he exposed Hamilton College’s cover-up of the “Die-In” protests in response to the deaths of Eric Garner and Michael Brown that included state police being called out and a student running through the library screaming about the evils of capitalism, the country, and ‘police pigs,’ he was personally attacked by a professor who sent him a harassing email and denounced him in an article published in the campus newspaper. In 2014, before a large audience of students and faculty, he and fellow AHI undergraduate leader Dean Ball took part in a panel discussion on free speech. They debated three professors and Amit Taneja, Hamilton College’s Director of Diversity and Inclusion. During his undergraduate years, Joe also worked as an assistant production intern at The Blaze, where he wrote for a daily radio show.

At the New York Post Simonson demonstrated his writing talents in numerous unsigned editorials, as well as columns on politics and pop culture, especially on issues affecting Millennials. Recently, he wrote an article for National Review, “Liberals Have Enemies to Their Left,” about the dangerous civil war brewing in Democratic Party circles between the self-described “dirtbag left” and the “libs.” In it, he warned that those breaking away from “Clinton-brand Democratic politics” in 2017 differ little from “1960s leftists disgusted with the ‘NATO intellectuals’” who are not satisfied with enacting and adjusting social reforms and policies. They see “total social upheaval” as “the only answer.” “Fortunately,” he concluded, “instead of the Weather Underground, we have (at least right now) only podcasts.”

Simonson says he is looking forward to assuming his role at the new publication. “I’m very much excited to begin my new job at Heat Street,” he writes from Manhattan, noting that he will have “nearly total editorial freedom.” He gives credit to the AHI: “There’s no way I would have this job without the AHI. All of my early success I owe in large part to the AHI for believing in me and helping me develop my writing.”

AHI Executive Director Robert Paquette taught Joe in several courses and directed his senior thesis, a study that centered on the founding generation’s evolving attitude toward the French Revolution. He expressed no surprise at Joe’s ascending trajectory. “Joe Simonson is smart, tough, and courageous, willing to learn and to stand tall in defense of principle, precisely the kind of young person typically attracted to the AHI.   I wish I could bottle and sell his energy.  I congratulate his parents on rearing such a fine young man.”