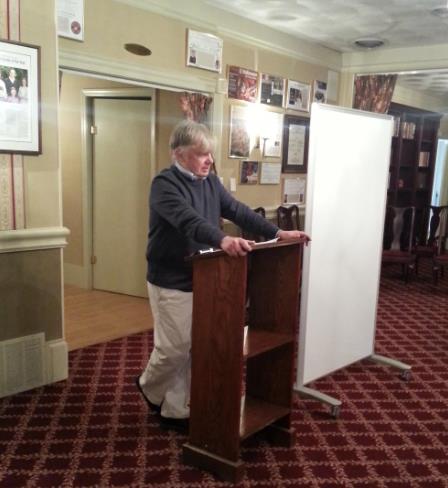 On Sunday, April 29, the Alexander Hamilton Institute for the Study of Western Civilization (AHI) welcomed back to AHI headquarters James Bradfield, Hamilton College Emeritus Professor of Economics and one of the three professorial co-founders of AHI.  Professor Bradfield spoke to a mixed audience that included members of an AHI-sponsored pre-law reading cluster on one of the seminal essays in the field of law and economics:  “The Problem of Social Cost,” by Nobel Prize-winner R.H. Coase.

AHI Executive Director Robert Paquette introduced his old friend and colleague by fondly recalling their years teaching together at Hamilton College. “Of all the courses that I have taught at Hamilton College,” he said, “the one that I enjoyed the most was the interdisciplinary course ‘The Idea and Institution of Property’ that I co-taught with Jim.” The course was “notorious” for its rigor, requiring eight papers and an oral final exam during which students were grilled on the substance of their previous papers by their fellow students as well as by the two professors.  The course began with the great debate between Plato and Aristotle on which form of property undergirds the best political regime and ended with the meaning of “public use” in the Fifth Amendment and the exercise by government of the power of eminent domain in the infamous Supreme Court case Kelo v. New London (2005).

Paquette described his dear friend’s “hierarchy of values,” placing family first, and then teaching— or his membership in the Alpha Delta Phi fraternity— second.  Bradfield had joined the Hamilton College chapter of the fraternity when he was a professor at Hamilton College. “There would not be an ADP treasure room without him,” said Paquette referring to one of two special archival rooms in which the fraternity’s memorabilia and papers, dating back to the Early Republic, are stored for safe-keeping.  “The fact, said Paquette, “that several very successful bankers and businessmen on Hamilton College’s Board of Trustees were taught by Bradfield and have helped to raise Hamilton’s endowment to more than one billion dollars speaks to Jim Bradfield’s quality in the classroom.”  In his opening comments Bradfield recalled the origins of the AHI, which went back to discussions he and Paquette had while teaching the interdisciplinary course on property. The course helped inspire the creation of AHI, Bradfield noted, for the “underpinning of AHI is a respect for private property rights, limited government, and the rule of law.”

Economics deals with efficiency, Bradfield explained, as he gave a hypothetical example of himself wanting to hire his neighbor’s teenage son to shovel his driveway. In such cases the two parties come up with a wage that is mutually beneficial. Government regulations, such as minimum wages, hinder such transactions. The state is inefficient in allocating resources. “Prices contain a lot of information,” said Bradfield, especially in terms of the “willingness to substitute.” He used another hypothetical example from consumers’ food purchasing habits, such as the relative price of chicken and beef, and how low prices drive down production and ultimately produce an equilibrium of supply and demand—an equilibrium that government regulations often saps.In fleshing out the meaning of the Coase Theorem, Bradfield provided a number of hypothetical examples of how it would operate in practice to increase efficiency without the intrusion of government. The theorem makes the case for “internalizing externalities” by clearly defining private property rights and lowering transaction costs so that resources will be allocated to the most highly valued uses. The Coase Theorem speaks to the question of how a society can maximize the number of “mutually beneficial exchanges.” In many cases, private transactions can proceed far more efficiently when unencumbered by government regulations. Advances in technology have greatly reduced transaction costs. For example, in the sale of real estate, records can be retrieved from a keyboard rather than a trip to a courthouse. The formation of corporate firms serves the same purpose.  Reducing uncertainty by more firmly securing private property rights in law acts to reduce costs.

Bradfield also gave the hypothetical example of neighbors who leave town and allow their children to have loud parties. Rather than getting the police involved the two neighbors might be able to work out a deal, for example, by paying for a weekend vacation for the offended party. The problem with government regulation is that it is based on a one-rule-fits-all idea, and is therefore often burdensome and wasteful. “Government,” Bradfield asserted, “doesn’t know preferences. Prices in free markets are not a rip-off mechanism but sources of information.” They indicate the “willingness to substitute by consumers. If something is important to you, you can put a price on it,” he stated, giving the example of a colleague who while Bradfield was serving as a dean at Hamilton College had initially declined to serve on a committee.   The fellow consented to do so, however, after Bradfield raised the question of payment for his service. 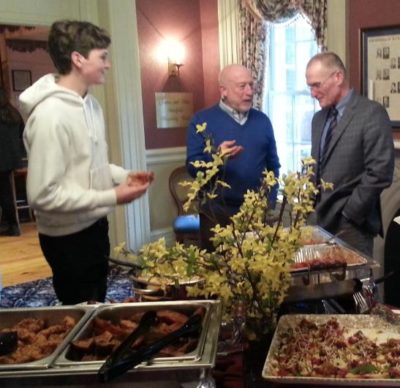 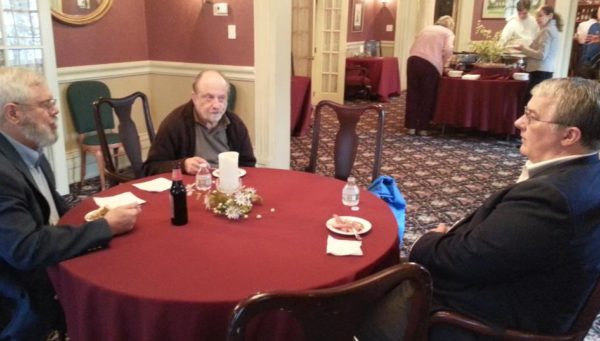 “The more securely you define private property rights, the more mutually beneficial exchanges you can have,” said Bradfield. This applies even to such things as natural forests. “If everybody owns it,” he stated, a “tragedy of the commons” can occur, referencing the title of a celebrated essay by the ecologist Garrett Hardin.  Private ownership, by internalizing externalities, make individuals fully accountable for their actions, thus spurring owners to manage better their assets. The same principle can be applied to protecting endangered species as, say, domestication of alligators has indicated.

Bradfield’s lecture inspired  numerous questions from the audience. In line with Friedrich Hayek’s important distinction between value and merit, Bradfield acknowledged limits to the Coase Theorem.  “Economics doesn’t solve everything” Economics deals with efficiency; “it doesn’t say anything about ‘fair.’”

Undergraduates in the audience included a contingent of brothers from Alpha Delta Phi. Andrew Verbinnen, a senior government major at Hamilton College and former president of the fraternity, observed “Professor Bradfield led a lively discussion of the Coase theorem. He clearly hasn’t lost a step since his teaching days.”