The Alexander Hamilton Institute for the Study of Western Civilization (AHI) congratulates AHI Senior Fellow, H. Lee Cheek, on the publication of Patrick Henry-Onslow Debate:  Liberty and Republicanism in American Political Thought (Lexington Books, 2013).  Dr. Cheek co-edited the volume, which gathers documents on one of the most momentous political debates about the meaning of republican government in the decades before the Civil War. 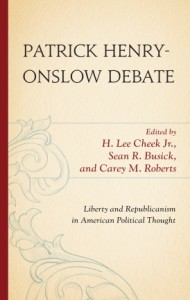 The debate followed the disputed Election of 1824.  After an indecisive electoral college vote, the House of Representatives selected John Quincy Adams as president over the more popular war hero, Andrew Jackson.  As a result, John C. Calhoun ended up serving as vice-president under Adams. Neither man was comfortable in this situation as they were political rivals who held philosophically divergent views of American constitutional governance. The emerging personal and philosophical dispute between President Adams and Vice-President Calhoun eventually prompted the two men (and Adams’s political supporters) to take up their pens, using the pseudonyms “Patrick Henry” and “Onslow,” in a public debate over the nature of power and liberty in a constitutional republic.

“The great debate,” notes Kevin Gutzman of Western Connecticut State University, a recent guest of the AHI, “arrayed Calhoun’s Jeffersonian republican vision of constitutionally restrained power and local autonomy against Adams’s neo-Federalist republican vision which called for the positive use of inherent power—a view that would become increasingly compelling to future generations of Americans.”  The debate between Vice President John C. Calhoun (‘Onslow’) and President John Quincy Adams or his ally (‘Patrick Henry’) captures the clash between Jeffersonian and Hamiltonian views at a pivotal moment in American history.

While the debate has not received the scholarly attention it deserves, the publication of this new book will reawaken interest in the vital dialogue.  The volume also features a blurb from AHI Charter Fellow Robert Paquette: “The debate between ‘Patrick Henry’ and ‘Onslow,’ said Paquette, “fought out in the pages of Washington newspapers in 1826, speaks to the idea of competing visions, present at the founding of the United States, of republican government. The editors of this timely volume return us to a lost world in which a seemingly small incident in the Senate could spark within the highest levels of government a deep and candid public analysis of the dialectic of liberty and power and its relation to the problem of limited government. Cheek and company deserve applause for this illuminating act of recovery.”

Dr. Cheek is Chairman and Professor of the Department of Political Science, East Georgia State College, in Swainsboro, Georgia.  His many publications include Calhoun and Popular Rule (2001).