Mary Grabar, Resident Fellow at the Alexander Hamilton Institute for the Study of Western Civilization (AHI), has been invited to speak at the Eagle Council, the annual meeting of the Eagle Forum, the pro-family conservative interest group founded by Phyllis Schlafly in 1972. Mrs. Schlafly is perhaps best known for writing the bestselling A Choice, Not an Echo (1964) about Republican Presidential candidate Barry Goldwater.  It helped launch the modern conservative movement and played a key role in defeating the Equal Rights Amendment. Mrs. Schlafly passed away at the age of 92 on Labor Day this year. 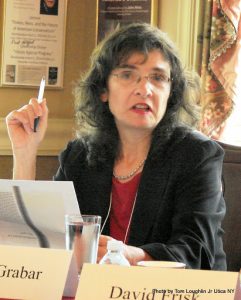 The Eagle Council will meet in St. Louis, September 16-18, and will feature such well-known leaders as David Horowitz, Ben and Candy Carson, John Bolton, and Morton Blackwell. The title of Dr. Grabar’s talk is “Common Core’s Effects on Higher Education.”

Mary Grabar holds a Ph.D. in English from the University of Georgia and taught college English for twenty years. She is also the founder and executive director of the non-profit educational reform organization, Dissident Prof, and has been writing about Common Core and other educational issues for the last several years. In October 15, 2015, she participated in a public debate “Common Core: Is It Good for Students and Teachers?” The event was organized by AHI Senior Fellow Robert Kraynak, Professor of Government at Colgate University and director of Colgate’s Center for Freedom and Western Civilization. She has written extensively on Common Core for such outlets as the Selous Foundation for Public Policy Research and the John William Pope Center for Higher Education Policy, and has provided testimony about Common Core English Language Arts standards at hearings at the Georgia State Capitol, the Georgia State Board of Education, and numerous public forums.

Dr. Grabar is writing a book about George S. Schuyler, under contract with Northern Illinois University Press. Schuyler (1895-1977) was at one time the most widely read and debated African American journalist. Often referred to as “the black H.L. Mencken,” he was known for his sharp wit, iconoclastic views, and transition from socialism to conservatism. While conducting research among his papers at Syracuse University in July 2011 as an AHI Bakwin Research Fellow, Dr. Grabar came across some correspondence between Schuyler and Schlafly, and then wrote to Schlafly.

Mrs. Schlafly replied immediately by letter. She recalled having Schuyler as a houseguest when he was to speak before her anticommunist group in the 1960s.  The details of that letter will be included in Dr. Grabar’s forthcoming on Schuyler. “I am sure that participants will be saddened by the passing of Mrs. Schlafly, as I am,” Grabar observed. “But I am looking forward to doing my small part in carrying her legacy forward—in fighting federal overreach in education and in writing about George Schuyler, Mrs. Schlafly’s fellow soldier in the fight against communism and all forms of totalitarianism.”