The Alexander Hamilton Institute for the Study of Western Civilization (AHI) congratulates Senior Fellow Juliana Pilon on publishing The Utopian Conceit and the War on Freedom. In a book that ranges from antiquity to modernity, Dr. Pilon, a political philosopher and noted expert on issues of national security, explores the roots of the common ancestor of both anti-capitalism and anti-Semitism in the contemporary world, where political and religious freedom is increasingly under assault. 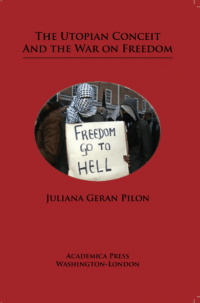 Pilon argues that after the unexpected collapse of the Soviet Union, absent a plausible alternative, Left and Right continue to be used routinely to describe conflicting political ideologies, notwithstanding their notorious ambiguity and—a fact too often forgotten—essentially common root. The dream of a perfect world, not only in heaven but on earth, has inspired each generation; that hope is universal. The vision of a demigod-superman who destroys all evil, thereby inaugurating a utopia of perfection and bliss, is at least as old as the book of Daniel in the Hebrew Bible. But behind that apocalyptic vision lies a fatal conceit, which the Greeks called hubris. It reemerged in some sects of early Christianity, then again in medieval millenarianism, Jacobinism, Marxism, Fascism, antisemitism, and even “liberal” collectivism. Modern-day Salafi-Islamism, which has benefited from both German and Russian assistance, is the latest in this nefarious tradition.

In an age of rampant skepticism and deracination, as religious and quasi-religious ideologies bent on the vilification and destruction of entire communities infect and undermine a confused, guilt-ridden, materialistic, often nihilistic Western society, a strong defense of freedom and pluralism, which form the basis of constitutional democracy, is necessary for survival. 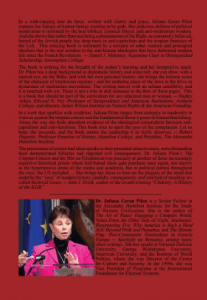 Dr. Pilon serves as director of AHI’s Washington Program on National Security (WaPoNs),  inaugurated in 2016. She is the author of The Art of Peace: Engaging a Complex World (2016); Notes From the Other Side of Night (1979); Soulmates: Resurrecting Eve (2011):  Why America is Such a Hard Sell: Beyond Pride and Prejudice (2007); and The Bloody Flag: Post-Communist Nationalism in Eastern Europe: Spotlight on Romania (1992), among many other writings. Over the years she has published more than two hundred articles and reviews on international affairs, human rights, literature, and philosophy and has made frequent appearances on radio and television. Dr. Pilon has taught at several colleges and universities including the National Defense University, Air University’s Language and Culture Center, St. Mary’s College of Maryland, Emory University, Johns Hopkins University, George Washington University, American University, the Rochester Institute of Technology, and the Institute of World Politics, where she was Director of the Center for Culture and Security. In 2014, she helped found the Daniel Morgan Academy. From 2010 to 2013, she directed the Center for Culture and Security at the Institute of World Politics, Washington, D.C. In the 1990s, she was Vice President of Programs for the International Foundation for Election Systems (IFES).

“Juliana Pilon has written a marvelous book on a central problem of modernity,” AHI President Robert Paquette observed, “a problem that in the Western world is getting worse, not better.  In explaining why, Juliana ranges across millennia.  The richness and readability of this thought-provoking volume offers potent medicine to the afflicted if only they have the wit to take it.”