During the 2017-2018 academic year, The Alexander Hamilton Institute for the Study of Western Civilization (AHI) is sponsoring at Colgate University a reading cluster devoted to Thucydides’ History of the Peloponnesian War.  On September 28, members of the group attended at the Colgate Inn in Hamilton, N.Y., a Leadership Dinner that featured an expert on Thucydides, Dr. Mary Nichols, an AHI Senior Fellow and Professor of Political Science at Baylor University.   Following the dinner, Dr. Nichols delivered on the Colgate campus a lecture, “Leaders and Leadership in Thucydides’ History.”  The events were co-sponsored by the AHI and Colgate’s Center for Freedom and Western Civilization. 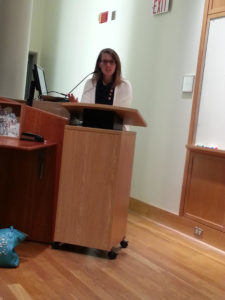 Dr. Beth L’Arrivee, leader of the AHI-sponsored reading cluster on Thucydides, introduced Dr. Nichols to a packed house of undergraduates and local citizens in the Perrson Hall auditorium.  She began with the question, “Does history teach lessons that transcend time and place?”  Thucydides, one of antiquity’s first historians, thought so, she said, for he wrote his history during the Peloponnesian War (431 BC – 404 BC) as “a possession for all time.” Nichols described what Thucydides has to teach us about leadership, themes she examines in her most recent book, Thucydides and the Pursuit of Freedom (Cornell University Press, 2015).  “The question of leadership,” she maintained, “cannot be separated from the issue of freedom.”

Dr. Nichols addressed the tension between freedom and the political constraints imposed by events beyond the control of leaders. Thucydides says, for example, that the war was made “inevitable” or “necessary” by the growth of Athenian power and Spartan fear. The Athenian empire constrained the actions of both the imperialistic city itself and its antagonists. “But if human life allows no scope for human agency,” Nichols pointed out, “there would be, strictly speaking, no leadership.”  Since those who appear in the historical record as leaders would be “compelled by the various forces that constitute necessity,” they would, every bit as much as their followers, be denied their own agency.   In contrast to such readings that minimize human agency, she argued, Thucydides demonstrates in his History that “leadership itself demonstrates freedom.” 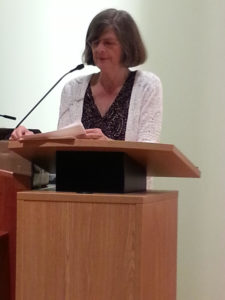 In arguing her point, Dr. Nichols examined central moments in the careers of four leaders that figure prominently in Thucydides’ History, three from Athens during different periods of the twenty-seven-year war and one from Sparta, Athens’s primary antagonist in the war. She began with the Athenian, Pericles, who was ruling at the “peak of Athens’ greatness.” Thucydides understood Pericles as the consummate statesman for a democratic regime, which looks up to freedom, even when it understands that its freedom requires limiting freedom in ruling inhabitants of other cities. She then turned to the paradox of Brasidas, the courageous and virtuous Spartan general whose outstanding leadership skills helped liberate cities from Athenian hegemony yet lost him the ability to lead his own city. Without the support of Sparta, Brasidus could not triumph over Athens. Third, she discussed Alcibiades.  Charming and egoistical, he wants to lead Athens to glory, but he contributes to its fall by undertaking an ill-advised, ill-conceived expedition to Sicily.  Alcibiades’s self-absorption prohibited from seeing the importance of the Athenian regime in fostering and protecting freedom. By not disassociating self from end, he pushed his understanding of Athenian freedom to the point of threatening the very freedom of his city. 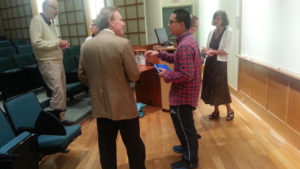 Attendees before the lecture

In Nicias, Nichols concluded, the Athenians had an elderly and cautious Athenian general who was so insufficiently free of his city that he could not lead his army to safety. Nicias relied too much on what she called “law-bred virtue”; his learning to take responsibility came too late. “In each case,” Nichols stated, “leadership succeeds or falters depending on the character of the leader and his relation to his political community, on the ways in which he makes its ideals and aspirations his own, and on the ways in which he is able to share his own ideals and aspirations with his community.  The superior city is the one that not only allows but also demands freedom, one in which leaders can therefore follow its lead.”  According to Thucydides, Pericles was the most capable Athenian of his time in “both in speaking and acting.” His speeches demonstrate his ability to lead, beginning with his first speech just before the outset of the war, when he warns about giving in to Sparta’s demand for concessions and encourages willingly accepting war in order to ward off greater dangers and to preserve honor.  Near the end of the first year of the Peloponnesian War, Pericles, in his famous funeral oration (a speech mined heavily by Abraham Lincoln in preparation for his Gettysburg Address), honored those who fell in battle and explained that their deaths were validated by the city they served—its regime and way of life, including democratic principles and equality of the citizens before the law. His next challenge came with the  devastating plague that visited Athens; by accepting his part of the blame for the war (while pointing to the common responsibility) and by keeping silent on his own personal losses, he demonstrated his own confidence and presented himself as a model for other Athenians. 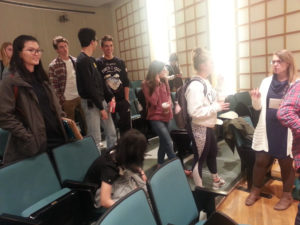 Nichols’ talk inspired questions from young and old in the audience.  She commented on such enduring concerns as the balance between chaos and order, the justification for imperialism, the role of missed opportunities, and the tension between realism and idealism.  “Mary Nichols showed this evening not only why she is an outstanding scholar,” AHI Executive Director Robert Paquette observed, “but why she is an inspirational teacher and mentor.  According to recent reports, Thucydides has become a must read for strategists in the inner circle of the Trump White House.  In providing telling examples of the enduring wisdom in Thucydides’ History, she suggests why.”