The Alexander Hamilton Institute for the Study of Western Civilization (AHI) congratulates Undergraduate Fellow Alex Klosner on being awarded a summer fellowship from the Charles Koch Institute.  Alex, a resident of Ilion, New York, and a sophomore economics major at Hamilton College, will attend two, week-long seminars in Washington, D.C. and work at the Empire Center for Public Policy in Albany, New York. 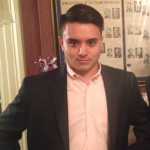 Founded in 2005 by Edmund McMahon, Senior Fellow at the Manhattan Institute’s Center for State and Local Leadership, the Empire Center is “an independent, non-partisan, non-profit think tank” whose mission centers on “promoting public policy reforms grounded in free-market principles, personal responsibility, and the ideals of effective and accountable government.” The Center conducts research on New York’s business climate, promotes greater government transparency and fiscal responsibility in state and local governments.

The Charles Koch Institute, which funds the award, is, according to its mission statement “a non-profit educational organization focused on the importance of free societies and how they increase well-being for the overwhelming majority of people. Through sound research, education and robust discussion, the Institute aims to advance understanding of what it means to flourish and how to enhance people’s ability to lead better lives.”

During the summer of 2014, Alex worked two jobs: as a full-time employee for an insurance company and as a research assistant for AHI Charter Fellow James Bradfield, an economist, who is working on a text in financial economics.  Alex has been involved with the AHI since his freshman year, writes for the AHI’s publication Enquiry, serves as treasurer for the Hamilton College Republicans, tutors refugees in Utica through Project SHINE, and is a member of the Hamilton College Student Assembly.

“While assisting me with my book, “Economic Efficiency in Financial Markets,” said Bradfield, “Alex performed diligently, cheerfully, promptly, and carefully in all that I asked him to do.  A few of his assignments were clerical and mundane.  Many of the tasks required him to use his knowledge of economic theory to read my work with an eye to accuracy of my logic.  He was trustworthy in all the tasks.”

“Alex Klosner has a very high ceiling,” added AHI Charter Fellow Robert Paquette, who has taught Alex.  “He combines intelligence, industriousness, and exemplary character into a set of skills well suited to the needs of the Empire Center.  He went through a rigorous process of competition, and, thanks to the Charles Koch Institute, will continue his educational ascent into an accomplished and responsible citizen.”