Dr. David Frisk, a Resident Fellow at the Alexander Hamilton Institute for the Study of Western Civilization (AHI), was recently a guest on “Wake Up!” with Steve Curtis, KLZ-560 radio in Denver, CO. Their hourlong topic on November 24 was the current state of American politics and the presidential race. In addition to his morning drive-time show, which aims at “aggressive political, social, and spiritual dialogue,” Curtis has held a leadership role in the Denver Tea Party and is a former state Republican chairman in Colorado. 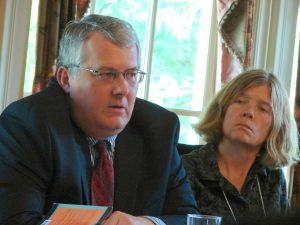 “It was enjoyable to share my analysis and perspective with this excellent, knowledgeable host,” Frisk commented. “Steve began the interview by not only mentioning the AHI, but asking me to explain what it is and allowing a little time for that. It seemed that he was quite receptive—and his listeners were undoubtedly glad to hear about us, especially after all the recent outrages that have occurred on various college campuses. He was very interested in my remarks about the political scene and the challenges of right-of-center reform politics. I have already been scheduled for a second appearance next month.”

Among the main topics discussed were the differences between outsider candidates like Donald Trump and candidates with more traditional backgrounds. Another was the concept of “running government like a business.”

Dr. Frisk, who has been at the AHI since 2013, teaches its popular continuing education courses, which cover politics, political philosophy, history, and currently the U.S. Constitution. He holds a Ph.D. in political science from Claremont Graduate University and is the author of the widely reviewed and acclaimed biography If Not Us, Who? William Rusher, National Review, and the Conservative Movement (ISI Books, 2012). Frisk also leads reading groups for Hamilton College students and is editing and contributing to a volume of essays re-examining the 1964 Goldwater campaign. In addition, he has started work on a book that will analyze the relationship between classical liberalism and traditionalist or social-cultural conservatism.