Mary Grabar, Resident Fellow, The Alexander Hamilton Institute for the Study of Western Civilization (AHI), recently traveled to New York City to film her appearance in “America Rewritten,” a special documentary from The Epoch Times “on how history is being falsified and how the system of government is being misrepresented.”  The film features interviews by such “leading experts,” as Victor Davis Hanson, Dinesh D’Souza, Rick Green, Trevor Loudon, Thomas K. Lindsay, Kevin Roberts, Craig Parshall, Dustin Bass, and K. Lloyd Billingsley. “America Rewritten” explores “what the world would lose if the American Constitution were lost.”

In the film, which was released on July 6, Dr. Grabar discusses with host Joshua Philipp how the late Marxist propagandist Howard Zinn dishonestly presented American history and the founding in his bestselling A People’s History of the United States. His intention was to subvert faith in Constitutional principles and inspire hatred of America among students, who are often assigned the book by their teachers. She describes how Zinn “pretended to be uncovering a long-lost theory” promoted by historian Charles Beard.  He claimed that the Founders designed the American form of government to protect their own wealth, power, and class interests. To the contrary, Grabar asserts, Beard’s theory had been thoroughly discussed and debunked many times over and America has been rightfully seen as the place where people could come and elevate themselves by their own efforts. 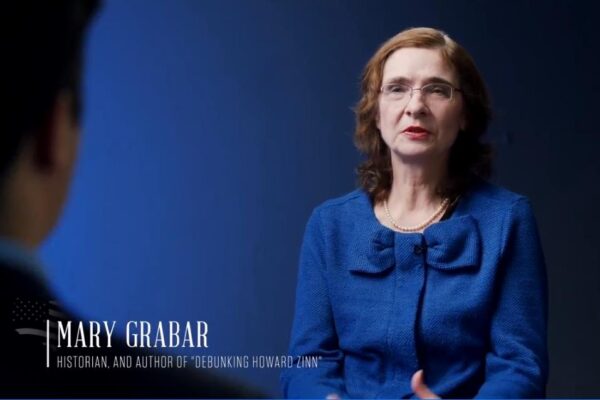 Grabar’s Debunking Howard Zinn: Exposing the Fake History That Turned a Generation against America (Regnery 2019), which reached best-seller status on Amazon, begins by demonstrating how Zinn distorted the discovery of America by selectively and dishonestly quoting Christopher Columbus as well as plagiarizing a disreputable book about him by a writer of fiction.  Her book continues through key moments of American history to reveal, step by step, Zinn’s trickery and falsifications in writing A People’s History.

Grabar’s Debunking the 1619 Project: Exposing the Plan to Divide America will be published by Regnery in September.