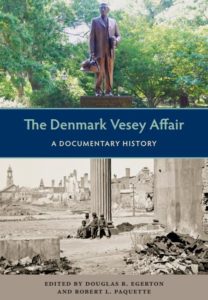 According to Choice, books that receive this award are selected for their excellence in scholarship and presentation, significance of contribution to the field, and value as an important—often first—treatment of their subject. Only nine percent of the titles reviewed by Choice during the past year, and two percent of the more than 25,000 titles submitted to Choice over the same period, constitute Outstanding Academic Titles.

The volume delves into a seminal event in the history of South Carolina, a plot, uncovered in Charleston in 1822 and allegedly masterminded by a freed black carpenter named Denmark Vesey.  The plot transformed politics within the state, set the stage for South Carolina’s confrontation with federal power during the nullification crisis, and help chart the course of the South to secession.